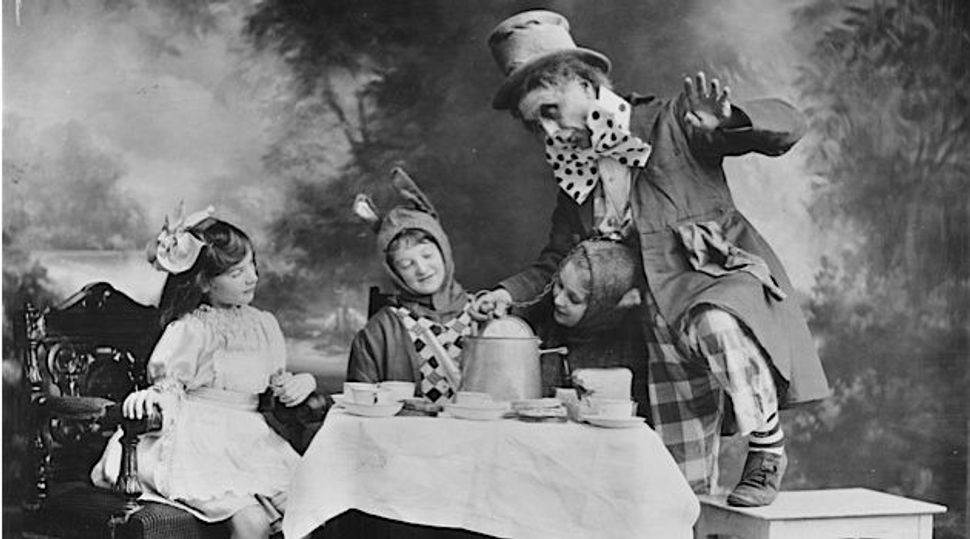 Go Ask Alice: The Mad Hatter’s tea party as seen in a 1910 theater production of ‘Alice In Wonderland.’ Image by getty images

Most biographies of Charles Lutwidge Dodgson, the English logician and Anglican deacon who signed “Alice in Wonderland” with the pen name Lewis Carroll, misunderstood their subject entirely. In his new book, Edward Wakeling persuasively argues that Carroll was not a pedophile, as other writers have hastily concluded. And the odd visions described in “Alice” did not result from drug abuse, as previous biographers have charged. Carroll’s statements about the Jews, however, remain unexplained.

In a 1980 review of an edition of Carroll’s “Symbolic Logic,” the American Jewish logician Irving M. Copi (born Copilowish) suggested as much. A student of Bertrand Russell, Copi notes that readers of Carroll’s logical examples “may be put off by… the varied remarks about Jews: that they are sarcastic, either hunchbacked or misers, obsequious unless very young, squinting, dishonest, look like goats, have beards a yard long and hooked noses.”

To establish a logical premise, Carroll repeatedly offers a phrase such as “All Juwes [sic] are greedy.” In “Symbolic Logic” he proffers the following examples, among many: “No Gentiles have hooked noses”; “No Jew is ever a bad hand at a bargain”; “There are no Jews in the house”; “No Gentiles have beards a yard long”; and “No Jews are honest.”

Jotting in his diary about an 1885 children’s rendition of Gilbert and Sullivan’s “The Pirates of Penzance,” Carroll noted: “It was a very charming performance, and some of them have lovely voices, specially ‘Elsie Joel’ who acted Mabel: she looks Jewish.” Contemporary reviewers also praised the singer, but with no reference to any presumed Semitic origins.

Carroll is quoted in an 1885 interview approving the distribution of free copies of “Alice in Wonderland” to a London Jewish hospital, stating: “Why in the world shouldn’t little Israelites read ‘Alice’ as well as other children?”

In Chapter 19 of Carroll’s novel “Sylvie and Bruno,” Dr. Arthur Forester, a character presented as highly intelligent and moral, offers his opinions about Jews. Forester points to the Old Testament where “rewards and punishments are constantly appealed to as motives for action. That teaching is best for children, and the Israelites seem to have been, mentally, utter children.”

Carroll saw Judaism as a religion of killjoys. He differentiated between an Anglican notion of Sunday as a day of rest and the Jewish tradition of keeping Shabbat. He once wrote a letter to an illustrator, asking her not to work on projects for him on Sundays, adding: “I do not hold [Sunday] to be the Jewish ‘Sabbath,’ but I do hold it to be ‘the Lord’s Day,’ and so to be made very distinct from the other days.” Carroll rejected the concept of Shabbat as detailed in Chapter 25 of “Sylvie and Bruno”: Forester informs Lady Muriel Orme that Sunday is called the Christian Sabbath “in recognition of the spirit of the Jewish institution, that one day in seven should be a day of rest. But I hold that Christians are freed from the literal observance of the Fourth Commandment.” Such observance, according to Carroll, leads to life-denying piety.

Old Testament references translate to no fun in Carroll’s eyes. Chapter 10 of “Sylvie and Bruno” contains an even more noxious stereotype. An indebted customer wards off a tailor demanding payment by offering to double the amount owed each year. Russ Roberts, a research fellow at Stanford University’s Hoover Institution notes, “being a tailor was once a stereotypically Jewish profession.” Although Carroll does not openly state that the tailor is a Jew, the economist John Maynard Keynes, a discerning reader, assumed that this was the case. In “Economic Possibilities for our Grandchildren,” a 1930 essay, Keynes argued against deferring gratification. The tailor in “Sylvie and Bruno” deferred payment in exchange for future greater rewards, denying himself present pleasures for a “spurious and delusive immortality.” Keynes states: “Perhaps it is not an accident that the race which did most to bring the promise of immortality into the heart and essence of our religions has done the most for the principle of compound interest and particularly loves this most purposive of human institutions.” Alluding to Jewish usurers with respect to “Sylvie and Bruno,” Keynes echoed Carroll’s unsympathetic view of Judaism as a joyless religion.

Yet some joy was expressed by an English Jewish writer, Anthony M. E. Goldschmidt, in a 1933 satirical article, “Alice in Wonderland Psycho-Analysed” which Wakeling charges with playing a role in subsequent typing of Carroll as a pedophile. Goldschmidt was a childhood friend of the playwright Terence Rattigan, with whom he co-authored the 1938 anti-Nazi farce “Follow My Leader.” Before being killed in action as a Royal Artillery platoon commander in World War II, Goldschmidt (who by then had changed his name to Goldsmith) also encouraged a young soldier to write, the famed humorist Spike Milligan. Yet Goldschmidt’s wit pales next to “Lewis Carroll’s ‘Through the Looking Glass’ Decoded” and “‘Alice in Wonderland’: The Secret Language of Lewis Carroll Revealed.” These books, by Dr. Abraham Ettleson, an American Jewish brain surgeon who served in the Abraham Lincoln Brigade during the Spanish Civil War, claim that Carroll’s works conceal messages full of Yiddishkeit. For example, Jabberwocky is supposedly a code name for the Baal Shem Tov. The ball of wool that Alice’s kitten plays with in “Alice in Wonderland” symbolizes tzitzit (“The kitten curled up in a corner evokes the four corners” of the tzitzit, Ettelson alleged). Carroll’s nonsense adjective frumious, also from “Jabberwocky,” naturally derives from frum. An added giggle is reading a sobersided attack on Ettleson’s theories in “Philosophy of Nonsense: The Intuitions of Victorian Nonsense Literature” by a humourless French professor, Jean-Jacques Lecercle, who decries him as a “literary madmen.”

Wakeling offers no apology for Carroll’s statements about Jews, which may well be within the parameters of Victorian British behavior, like the rest of Carroll’s idiosyncrasies. Yet “Alice in Wonderland” is such a remarkable book that one might have wished its author to transcend the common prejudices of his day.