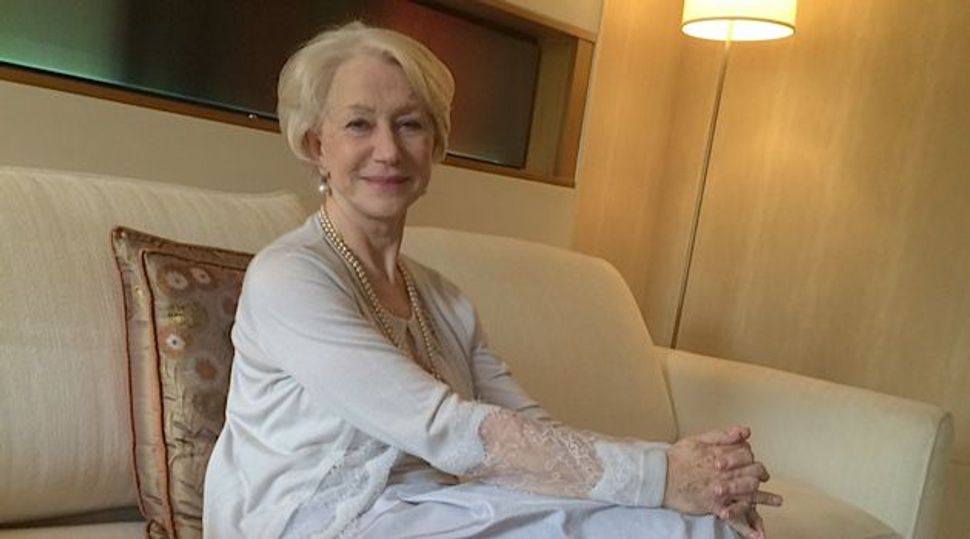 When I first meet Helen Mirren, the actress pauses before she shakes my hand. Instead, she goes for the hand sanitizer. “I’m appearing in a play,” she says, “and I’m deathly afraid of catching a cold.” I suggest a fist bump instead, but once sanitized she goes with the more traditional route.

Mirren is currently appearing on Broadway as Queen Elizabeth II in “The Audience,” a play that offers a fictional recreation of the weekly meetings between the British sovereign and the country’s prime ministers during which they discuss — well, no one really knows, since the conversations are secret.

She is ensconced in a suite at Manhattan’s Essex House. She wears a taupe ankle-length dress with a matching light sweater wrap. A day’s worth of interviews have been scheduled, with journalists trooping in one at a time in much the same way British prime ministers call on the queen. When I suggest that this process is a real-life version of the play she’s in, she laughs.

For the record, it’s not one of those demure, behind-the-fingers chuckles. It is a full-out belly guffaw. “Yes it does seem that way, doesn’t it,” she says. “I didn’t think of that. But with the queen, everything is totally private. Here everything I say is public.”

My meeting with Mirren is occasioned by her latest film, “Woman in Gold,” in which she portrays Maria Altmann, who spent eight years fighting the Austrian government to reclaim Gustav Klimt’s “Portrait of Adele Bloch-Bauer I,” which was stolen from her family’s Vienna home by the Nazis.

Mirren tells me she related to Maria Altmann’s story in part because she is “a person of the Second World War generation.” Her father was an immigrant from Russia, where he’d been part of a privileged family that was forced to leave everything behind when they left for England.

“My background was weird,” she says. “Financially we were lower class. My father was a taxi driver for a while. My mother was from the East End [of London] working class. But my grandfather was a Russian aristocrat… We lost material things. We lost our estates. We lost our icons. We lost everything, but our family.”

To play the role of a Mossad agent in the film “The Debt,” Mirren took Hebrew lessons. Or that’s the way the story was reported in the news. When I ask her about it, she says yes, she did take lessons, but the stories were exaggerated. “I can’t speak Hebrew,” she says. “I learned the Hebrew I needed for the role.”

For the role of Maria Altmann, Mirren had to immerse herself more deeply. “It was incumbent on me to study Maria, which I did,” she says. “More than the outward look — the eyes, the wigs, the gestures — I wanted to fill myself with her memories… Most of my research was looking at documentary footage of the Holocaust. I also read [William Shirer’s] ‘The Rise and Fall of the Third Reich.’ Have you read it? The detail. The fact that he was there. So I just filled my mind with that.”

Attorney E. Randol Schoenberg also helped Mirren in her research by providing her with a film of Altmann that was recorded during depositions. Schoenberg knew Altmann long before he became her attorney. “Maria was at my bar mitzvah,” he says. “If you asked me how to describe Maria, it is witty, charming, arrogant and tough, and that’s how you would describe Helen Mirren. She’s just naturally suited to play Maria.”

I asked Mirren if her research crystallized any thoughts she might have had about British anti-Semitism, or if she had ever witnessed it firsthand. “Not so much in my life,” she said, “because my father was a left-wing socialist who participated in the anti-fascist marches. The fascists marched in the East End because that’s where the Jewish community was. So in my family background, I can honestly say I haven’t seen it. But historically, I know [anti-Semitism] exists.”

Mirren’s publicist comes in and signals my time with the queen is winding down. So quickly (and delicately) I point out that Mirren has been known over the course of the years to make controversial comments: about her cocaine use, about shopping at a stripper boutique for five-inch heels for red carpet appearances, about the fact that Hollywood films cater to “the 18- to 25-year-old male and his penis.”

Well, she tells me, she doesn’t see these remarks as controversial. “People take them in a controversial way,” she says.

Still, I persist. Isn’t there something controversial she can tell only me that would allow this story to go viral? She laughs again, and says, “No, thank you.”

Mirren has already been typecast as a British queen. In addition to Elizabeth II, she has also played Elizabeth I and Charlotte of Mecklenburg-Strelitz, wife of King George III. Now that she’s played a Mossad agent and Maria Altmann, I ask if she’s afraid she’ll be typecast as a Jew. She laughs once more.

“There are plenty of good Jewish actresses,” she says. “But I wouldn’t be surprised if I had a little Jewish blood through my East End mother.”