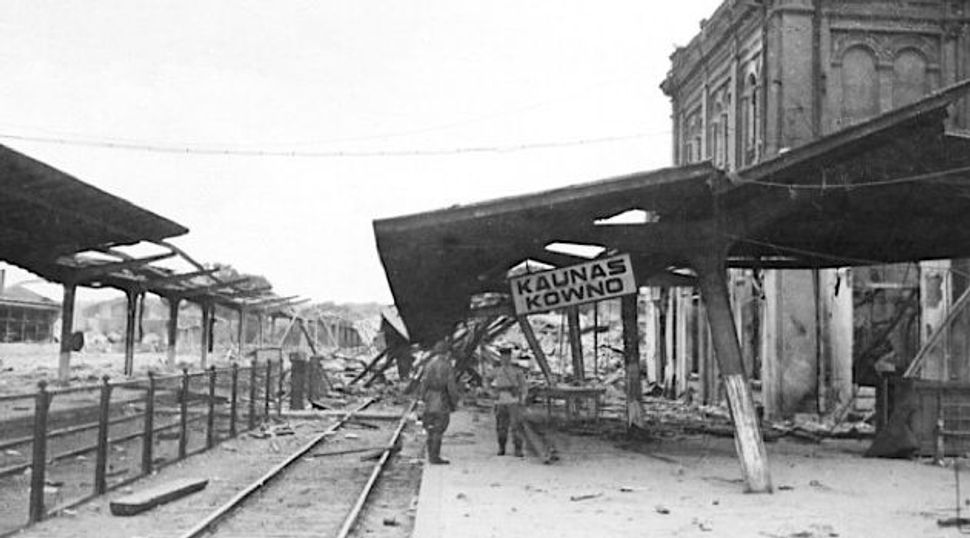 When we think of Lithuanian Jewry, we tend to think of Vilnius, “The Yerushalaim of Litte,” for its fame as a Jewish religious and intellectual center, its great scholars, and its contribution to Yiddish language and culture. However, Lithuania had a second vibrant Jewish community, Kaunas (then called Kovno).

Kaunas was renowned not only for its many excellent Jewish schools, famed yeshivot, great writers and thinkers, but also for its talented and successful professionals and artists. After the establishment of an independent Lithuania, Kaunas became the capital. By 1933, the Jewish population had grown to over 38,000 and included the most important Jewish industrial enterprises in Lithuania.

The book was published last year, which was the 70th anniversary of the tragic end of this remarkable community. During July 1944, the last 2,000 Jewish survivors of the ghetto established by the Nazis in the Kaunas suburb of Villiampole, the old, largely Jewish district known as Slobodka, were transported to the Dachau and Stutthof concentration camps where most were murdered.

But Kaunas has another unusual distinction. During the Holocaust period it was one of the ghettos in which the Jewish council and the Jewish ghetto police supported the unified Jewish community and the underground resistance movements. This was possible because the head of the Jewish council, Dr. Elhanan Elkes, a respected physician who was a Zionist, helped all the underground movements, including the Communists, in spite of ideological differences. The Jewish police were also very cooperative with the underground. When the hastily established Jewish council met, Dr. Elkes was asked to serve as “Head Jew,” or Oberjude. One of the most respected figures in the community, the son of a rabbi and a noted medical doctor, he at first refused but was finally persuaded to accept the post during this dire period.

Now, a remarkable book, “The Clandestine History of the Kovno Jewish Ghetto Police,” provides a graphic and unparalleled description of the conditions under which the Jews of Kaunas tried to live and survive during this tragic period. We do not know the names of those who actually wrote this history, but it is likely that Moishe Levin, commander of the ghetto police, and his deputy, Yehuda Zupovitz, were the editors. The ghetto police, all from Kaunas, were mainly middle-class Jewish veterans who had participated in the struggle for Lithuania’s independence, as well as Jewish reserve army officers. Most were Revisionist Zionists. We know that more than one man contributed to this secret history of events in the ghetto, written in Yiddish. The obviously experienced editors incorporated written contributions by other policemen who had participated in the events described.

There is no doubt about the history’s authenticity. The manuscript, buried in a metal box found in 1964 during a construction project, contained 249 pages of typed text. The book begins with a lucid introduction by historian Samuel D. Kassow, which provides a history of the Holocaust in Kaunas and explains the importance of this eyewitness report of events that took place from 1942-1943, during German occupation of the Kaunas ghetto.

The main goal of the history was to record the life of Kaunas Jews under the Nazi occupation. The police also wanted to reclaim their reputation because not everyone in the ghetto understood their dilemma of being caught in the middle between the demands of the German authorities and their desire to help their fellow Jews.

The editors state their motivation for recording these events (likely until the end of 1943): “All of us who have remained here in the ghetto after all the ‘actions’ have not as yet ‘jumped over the grave.’ The threat of death and annihilation hovers like a specter over our heads to this day. If we should survive and tell all, we will not be believed; all this will be taken as fantasies, or it will be supposed that our misery caused us to lose our minds. If we should not survive, then perhaps the document we are writing here will fall into the hands of Jews, who will read and be astonished by what was done to us in the gloomy ghetto. What we are reporting here are, regrettably, factual events, nothing is exaggerated or fantasized.”

On August 15, 1941, all Jews in Kaunas were ordered into the ghetto established by the Nazis in the Slobodka district. Eventually, almost 30,000 Jews were crowded into this old part of Kaunas, an area with totally inadequate facilities that had earlier been occupied by only 7,000 people.

It is with the movement into the ghetto that the problematic story of the police really begins. The necessity of maintaining some semblance of order and civility under such barbaric conditions presented the leadership of the ghetto with an unenviable task. The Jewish council almost immediately created a registration bureau, a housing office to accommodate the thousands streaming into Slobodka, a labor office to arrange the slave labor demanded by the authorities, and a ghetto police to maintain order.

“The Clandestine History” stops at the end of 1943, when the ghetto was turned into a concentration camp and the main goal of the history had been achieved. Unfortunately, the leadership of the ghetto police did not survive.

On March 26, 1944, the entire police force, led by Levin and his two deputies, Zupovitz and Ika Grinberg, were ordered into buses which took them to the Ninth Fort. There the leaders were tortured, but would not reveal how they had helped to smuggle Jews to the forests; along with 31 comrades, they were shot that day.

“The Clandestine History” indicates that the relationship between the ghetto police and the Jewish council was strained. One reason was that the Jewish council prepared the lists of those who were to be deported to other concentration camps, while the police had to carry out the decisions. As well, the number of those to be sent to work outside the ghetto and at the airport was also determined by the council but delivered to the gate by the police. Thus the police didn’t have very much power but were seen by the populace as the perpetrators. Undoubtedly part of the motivation for writing the history was to indicate that the police were caught in the middle and had to fulfill responsibilities that made them appear to be brutal enforcers.

In spite of these strains, cooperation between the Jewish council and the Jewish ghetto police did allow for order in the ghetto and some amelioration of the brutal conditions imposed by the Nazis (especially the smuggling in of food). Most important, the police also made it possible for the Jewish underground to operate in the ghetto and to smuggle out Jewish fighters to help sabotage the German military effort.

Adam G. Fuerstenberg, a child survivor of the Holocaust, is professor emeritus at Ryerson University in Toronto.

Sara Ginaite, a partisan fighter of the Jewish underground in Kaunas during the Holocaust, is the author of “Resistance and Survival: The Jewish Community in Kaunas, 1941-1944.”