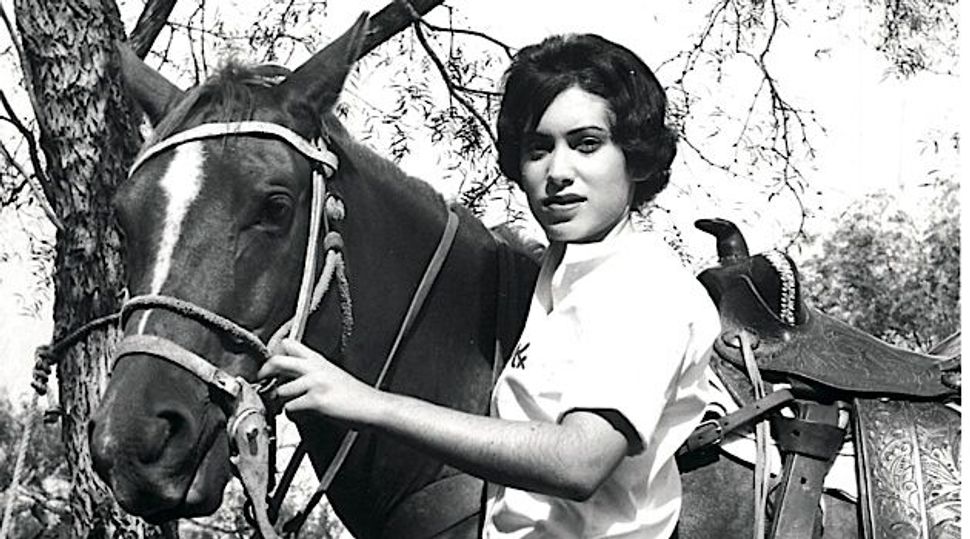 Back in the Saddle Again: Rose Sinkin’s eldest daughter Nancy models the company’s western wear in the late 1950’s. Image by Courtesy of deborah kolben

Grandma Rose, aka Texas Rose, was mean until the day she died. She was as stingy with love as she was with money, and saved her greatest affection for the San Antonio Spurs, hats with sparkly rhinestones, and anything that could be categorized as a good deal.

Even into her 90s, she started each day with 20 minutes on her exercise bike and ended with a large format crossword puzzle. In between, she read up on the stock market and logged onto her dial-up computer to day trade. She viewed food as something necessary, but not particularly interesting. She wasn’t the kind of grandmother who whipped up matzo ball soup or babka. Instead, she would sit you down to explain price-earning ratios over a microwaved TV dinner.

Grandma Rose was 4-foot-11 and appeared even shorter. Perhaps it was the chip on her shoulder. She resented that we lived in New York, both because it was far away and because she assumed we thought we were superior to her because of it. She resented that my mother, her daughter, left Texas at 18. She resented that her husband, Sam, died at 68 and left her, as the story goes, one million dollars in debt. And she resented that her parents refused to pay for her college education because they believed girls should just get married and have children. (She managed to graduate from Washington University despite them.)

Late at night, with the air conditioning whirring in the background, Grandma Rose would gather us at her kitchen table and weave what sounded like fantastical tales about how she could have been a professional tennis player, how she sold encyclopedias to put herself through college, and how she managed to pay back every single dollar of debt.

In each of these stories, Grandma Rose cast herself the hero, the only reasonable person up against incredible odds and other people who were less intelligent than her. Given all the tales she told and the negative things she had to say about other people, the stories were always a little hard to believe.

But recently, a footnote in a book about a labor activist named Emma Tenayuca made me rethink Grandma Rose as a person and not just as the crotchety grandma who was often hard to love. In spite of her difficult personality, Grandma Rose insisted again and again, to anyone who would listen, that she had been a trailblazer for civil rights. Once she had run a clothing factory, and more than anyone else at the time, she had respected the people who worked on her factory floor. We learned she wasn’t exaggerating.

Growing up, we visited our grandparents in San Antonio about once a year. As New York City kids, my brother and I were amused by these forays into Texas. We were astounded by the “y’alls,” the pitcher-sized glasses of iced tea, and that when barbequed and served with slices of white bread, brisket could be something divine.

But by far our favorite thing to do on those trips was to go visit our grandparents’ large clothing factory across town. Much to our delight, our Jewish grandparents were responsible for what we saw as the very un-Jewish production of Western wear.

They made shirts with snap pockets, patches made from bandana fabric, and fringe hanging from the sleeves. They made the kind of clothes worn by movie cowboys like Roy Rogers — the kind of thing worn by ranchers, farmers and urban cowboys who, like our grandfather, didn’t spend much time with horses.

On these factory visits, they let us play “worker.” My brother punched in on the clock at the shipping department, packing pants and shirts, taping up boxes. I played “boss” and hung out in the office drinking Dr. Pepper.

While my grandfather did have a penchant for fine cowboy boots, cowboy hats and bolo ties, our grandparents originally got into the business to help fight Nazis (or at least outfit those doing so). As the military went off to war, its soldiers needed clothing to fight in, and our grandparents filled a niche by manufacturing uniforms for the Army.

During the war they made money and managed to find time to have two kids (a third followed not much later because, as Grandma Rose publicly declared at her 90th birthday party, they didn’t have the discipline to use birth control). Unlike many women of her time and social class, Grandma Rose worked outside of the house, helping to run the factory. At home she had a cook and nanny. 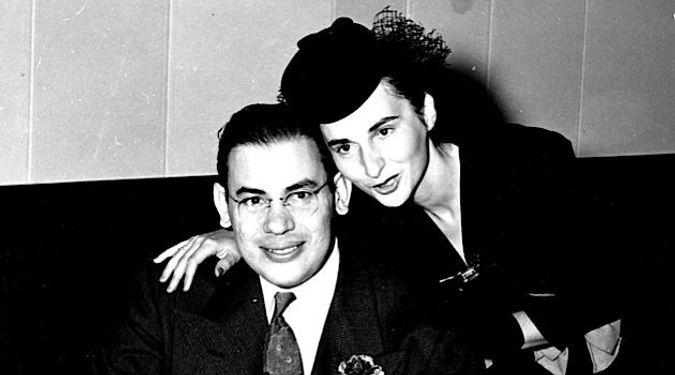 Grandma Rose was born in 1915 to Polish immigrants in St. Louis, Missouri, where her father was a tailor. (For most of her life Grandma Rose lied about her age because it was taboo to be older than one’s husband, and held fast to the story that she was born in 1916. We only learned the truth after she died last year.)

Grandpa Sam was a real Texan, born in San Antonio to parents from Pinsk, Russia. In 1908, after a Cossack raid in their village, Grandpa Sam’s parents fled and made their way to the United States through Ellis Island. The immigration official told him to go to Arizona or Texas, and he decided on San Antonio because there was a small Jewish community there. Grandpa Sam’s parents were socialists who ran a general store and then a factory, and at one point hosted Norman Thomas, the socialist candidate for president, when he was barnstorming around America in his quest for election.

My grandparents met in San Antonio when Grandma Rose was summering there in hopes that the Texas climate would help her mother’s health.

As the war ended, the government contracts dried up and the business nearly went belly-up. Undeterred, they saw a new opportunity — and that’s when the Western wear business was born.

As the business grew, my grandparents employed hundreds of workers. Eventually, the majority of the workers were Mexican. Grandma Rose would tell anybody that listened that she and Grandpa Sam were trailblazers, that they were the first ones in San Antonio to have an integrated factory with black, white and Hispanic workers.

But there was something always fuzzy about the factory’s history, especially because Grandma Rose cast the story as one of personal triumph, but it was never clear what she had actually done, or why the business was so special.

No one in my immediate family can recall hearing stories about any worker in the factory, so we were surprised when my brother stumbled over the mention of a woman named Emma Tenayuca in a book about Mexican-American workers in the 20th century. She had apparently worked for my grandparents.

Known as a fearless and effective union activist, Tenayuca was a leader and change maker in a time when it was rare for women to play those roles. Growing up in a family of 11, she was poor and witnessed the members of her community experiencing discrimination. By the age of 16 she had already been arrested for joining a picket line of workers striking against a cigar company. In photos that I found of Tenayuca online, she looks a little bit like Billie Holiday — inscrutable and defiant.

In 1938, Tenayuca made a name for herself as she helped lead one of the most famous conflicts of Texas labor history. At the time, San Antonio was a hub of pecan processing. While the nut-cracking process had been largely automated, most producers still hired Mexican American women to do the final nutmeat-picking work by hand. Tenayuca led thousands of workers at hundreds of pecan-shelling plants in strikes that lasted over a month to protest wage reductions. Workers who picketed were gassed, arrested and jailed.

Then, less than a year later, Tenayuca was scheduled to speak at a Communist Party meeting at the municipal auditorium in downtown San Antonio. A crowd of Ku Klux Klan members and thousands of others stormed the auditorium with bricks and rocks and threatened to lynch Tenayuca. According to accounts from the time, she barely escaped the mob. After that she was blacklisted and couldn’t find work because of her affiliation with the Communist Party.

That’s where my grandparents come in.

Few factory owners would hire anybody who had already organized two international ladies’ garment workers unions. But, despite Tenayuca’s pariah status, our grandparents hired her.

I wish my grandmother were still here so I could ask her more about Tenayuca. Whether she admired her because she was a strong woman, what kind of conversations my grandparents had about the hire. What did it mean for them to have taken such a huge risk? What were their ideals that trumped their business interests?

In many ways, I had stopped really hearing my grandmother’s stories. My eyes glazed over because I didn’t feel like she was really telling us about something that happened in her life, but rather that she was desperate for some sort of appreciation from us, for us to see her specialness, which became harder and harder to do because she rarely if ever made herself vulnerable.

But underneath the tough and often mean exterior, there was someone who in her own right was a revolutionary. She didn’t just stay home and raise children, but demanded her equal rights to education; she showed the world that she didn’t need a man to support her. But her toughness came with an emotional price for many of those around her, and for herself as well. Texas Rose wasn’t going to win any mother or grandmother of the year awards, but that wasn’t her goal. She was an independent and ambitious woman, and nobody was going to stop her from being and becoming the person she wanted and believed she could be.

Deborah Kolben is the editorial director at 70 Faces Media and the founding editor of Kveller.com.