‘The King’ and Us 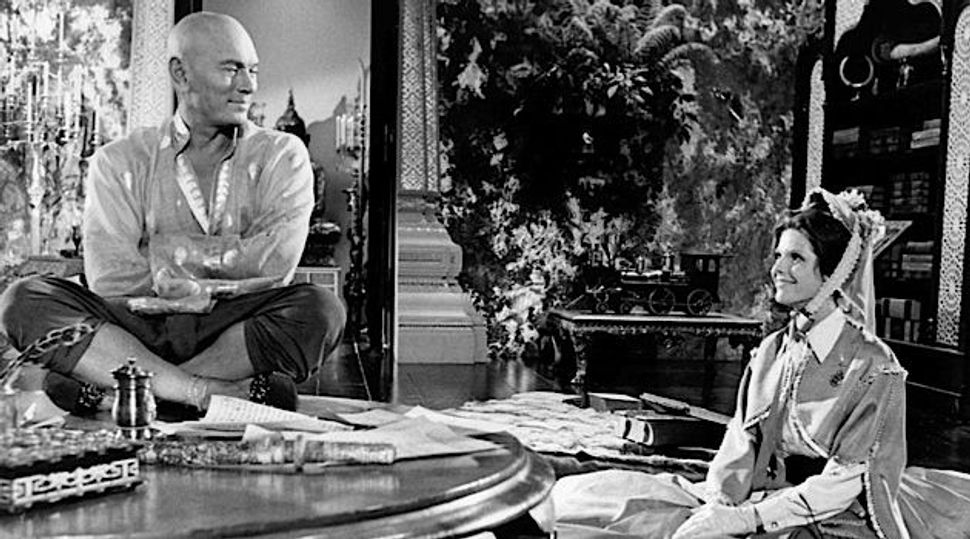 Yul Be Sorry: Yul Brynner and Samantha Eggar in a short-lived, 1972 sitcom version of “The King and I.” Image by Wikimedia Commons

“It is a puzzlement,” as Yul Brynner used to crow onstage, how Rodgers and Hammerstein, two American Jewish musical theater titans who promoted ethnic and racial tolerance, created such an insensitive spectacle as 1951’s “The King and I.” Now in its umpteenth Broadway revival, the musical comedy purports to show the historical figure of King Mongkut of Siam, today’s Thailand. In reality an intellectual polyglot trained in mathematics and astronomy who spent almost 30 years as a Buddhist monk before assuming leadership of his country, King Mongkut was a notably mild-mannered and progressive ruler. He liberalized several of the harsher laws of his land while astutely making sure that Siam would not share the fate of its Southeast Asian neighbors, colonized by Western powers.

“The King and I” takes no account of these facts, instead recounting a fabricated story at third hand, based on unreliable accounts by a self-aggrandizing mythomaniacal English teacher, Anna Leonowens, further fictionalized by the novelist Margaret Landon. Instead of King Mongkut’s contributions to civilization, viewers of “The King and I” witness a grotesque travesty in which the teacher denounces the king as a strutting royal buffoon and a “barbarian” and teaches him democracy while also desiring and dancing with him. The Rodgers and Hammerstein organization website repeatedly terms “The King and I” a “love story,” although the real-life King, after decades of chastity as a monk, fathered 82 children with 32 wives and had no romantic interest in Leonowens.

How could Richard Rodgers and Oscar Hammerstein II — both born in New York of German Jewish ancestry — have been so insensitive? Andrea Most’s “Making Americans: Jews and the Broadway Musical”) explains how both men tried to be aware of ethnic matters, but necessarily were limited by their era. Rodgers and Hammerstein’s “South Pacific” contains a song against racial prejudice, “You’ve Got to Be Carefully Taught,” which was considered daring at the time. Yet this laudable message is delivered in “South Pacific” amid onstage shenanigans by such stereotyped buffoonish Asian characters as Bloody Mary, a Pacific Island “wheeler-dealer.” The collaborators’ 1957 musical “Flower Drum Song,” about Chinese-Americans, quickly became so embarrassingly outdated that it could only be revived on Broadway in 2002 in an entirely rewritten version by Asian-American playwright David Henry Hwang.

This track record is surprising for Rodgers, whose father, a prosperous physician, changed the family name from Abrahams, and Hammerstein, who buried his father, a noted vaudeville producer, in a religious ceremony at Temple Israel of Harlem. As Columbia University undergraduates, both men joined Pi Lambda Phi, a fraternity founded at Yale in 1895 expressly to include Jews, barred from other Ivy League fraternities. Aware early on of prejudice, Hammerstein was more of an activist than Rodgers, even though the former had been raised Episcopalian by his parents.

As his biographer Hugh Fordin recounts in “Getting to Know Him,” in 1936 Hammerstein joined the executive council of the Hollywood League Against Nazism, chairing a commission to “combat racial intolerance and thus combat Nazism, which uses intolerance as a weapon to attain power.” In 1945, as Most explains, Hammerstein penned tracts against racial stereotypes for the Writers’ War Board, including a parody of his lyric “Ol’ Man River,” about minorities fighting heroically in World War II yet being mistakenly depicted by authors of the day:

More of an esthete than a mover-and-shaker, Rodgers explicitly rejected the role of political advocate in a 1948 letter to the actress Florence Eldridge. She expressed disappointment that Rodgers did not more actively oppose the Communist witch hunt by the House Un-American Activities Committee, especially since Rodgers was Jewish. Rodgers accused Eldridge of bigotry for expecting too much of him: “I said I was sick of this kind of anti-Semitism, and I am. You are attempting to put people like us in an intellectual ghetto when you tell us we must think and act your way because we are Jews. I insist on acting and thinking like an American primarily, and a Jew if I want to.”

Rodgers declared in his autobiography “Musical Stages” that he had decided to write “real” Asian characters in “The King and I”: “Oscar and I were determined to depict the Orientals in the story as characters, not caricatures, which has all too often been the case in the musical theatre. Our aim was to portray the king and his court with humanity and believability.”

Rodgers told the show’s choreographer Jerome Robbins (born Jerome Rabinowitz) to abandon authenticity in the dances he would create for “The King and I.” No paragon of ethnic probity, Robbins created for “The King and I” a ballet version of “Uncle Tom’s Cabin” retitled “The Small House of Uncle Thomas.” Dance historian Stephanie Prugh notes on ballet-dance.com, that this showstopper has nothing to do with traditional Thai dance because Robbins found books about Cambodian and Laotian dance, such as Raymond Cogniat’s “Danses d’Indochine” more easily available. Robbins threw in a dash of Japanese Kabuki as well, and would have included trained poodles to represent bloodhounds pursuing Eliza in “Uncle Tom’s Cabin” had not an assistant trained in Cambodian classical dance objected: “No!!! Jerry — this is Catskills kitschy. Out.” In his autobiography, Rodgers recalls telling Robbins not to allow “concern over the authenticity of the movements cripple him” since he and Hammerstein did not set out to recreate Siam anyway, but rather their own version of it.

Two years after “The King and I” opened on Broadway, Robbins appeared before the HUAC, naming names of Communist Party members among former friends, including fellow Jews such as Madeline Lee Gilford, wife of actor Jack Gilford, filmmaker Lionel Berman, and playwright Jerome Chodorov. A HUAC committee member thanked Robbins for his cooperation, announcing that he “was going to see ‘The King and I’ that very night and would now appreciate it all the more.”

With this kind of ethnic betrayal an inevitable subtext of “The King and I” nowadays, is a total rewrite such as Hwang performed on “Flower Drum Song” its only palatable future? Since the essential staged confrontation at the heart of “The King and I” traduces a culture and its people, even such a rewrite would not solve the problem. In recognition of evolving sensibilities, the Rodgers and Hammerstein organization should shelve the play as a humanitarian gesture toward Southeast Asian history and art, so energetically trampled upon by “The King and I.”

‘The King’ and Us