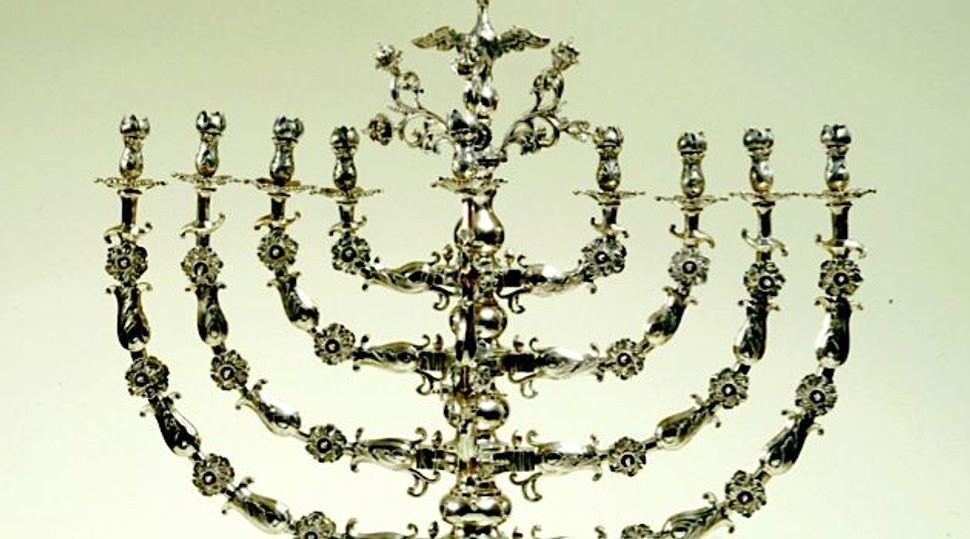 Keeping the Flame: This Hannukah lamp was among the 6,000 items that Harry G. Friedman donated to the Jewish Museum. Image by Wikimedia commons

Lately, I’ve been thinking a lot about what we know and how we know it, or, to put a fancy name to it, the processes by which academic disciplines are constituted and knowledge is organized. The more I mull, the more it seems to me that serendipity, curiosity and passion are key components of that process.

Collectors of artworks, books, manuscripts and objects have these qualities in spades. Museums and libraries would be considerably impoverished, their holdings severely diminished, were it not for their efforts. More to the point, many museums and libraries, from the Isabella Stewart Gardner Museum in Boston to the Morgan Library in New York, would simply not exist were it not for the benefactions of their eponymous donors. Thanks to their generous, public-spirited example, they have become household names and we, the rank-and-file, the beneficiaries of their largesse.

Within the American Jewish community, the collectors of rare Jewish books, manuscripts and objets d’art are not nearly as well known as they might be. They tend to keep to themselves, their holdings accessible to the cognoscenti and a coterie of consultants. Only when they make a splash do the rest of us know their names. How many American Jews were aware of the Valmadonna Trust Library before Sotheby’s put its spectacular holdings of Hebrew books and manuscripts on display? Or of Judy and Michael Steinhardt’s dazzling collection of Judaica before, it, too, was placed on the auction block?

How many of us were familiar with the Shapell Manuscript Foundation before its remarkable treasure trove of letters and broadsides, lithographs and photographs relating to Lincoln and the Jews went on view at the New-York Historical Society and, concomitantly, was published in a lush coffee table book, “Lincoln and the Jews: A History,” co-authored by historian Jonathan D. Sarna and Benjamin Shapell?

I confess: I wasn’t among them. Not until I received an invitation to the opening of the exhibition at the New-York Historical Society did I first learn of the Shapell Manuscript Foundation, much of which attends to American Jewish history, my chosen field, and whose injunction to “explore history in its original form” fires my own work. I suppose you could say I’ve been walking around with my head in a barrel. Then again, maybe not. When I, somewhat sheepishly, shared my chagrin with the curator of Jewish art at a renowned library of rare books and manuscripts, she dismissed it out of hand. “Why should you feel that way? Private collections are not common knowledge, after all.”

She’s right — but up to a point. Perhaps they should be. At the risk of being labeled a Pollyanna, I can’t help wonder how enriching it would be if more of our Jewish cultural patrimony was widely and publicly shared rather than kept under wraps, let alone consigned to auction houses when their days are numbered. Wouldn’t it redound to the collector to know that his or her prized possessions energize the imagination of students, generate scholarship, lend themselves to display, and nourish the commonweal?

An earlier generation of collectors certainly thought so. Consider the example of Harry G. Friedman who, in the course of his lifetime, which spanned 1881 through 1965, gifted the Metropolitan Museum of Art with 800 objects and the Jewish Museum with some 6,000 items. An astute investor with a keen eye for the visually arresting and culturally meaningful artifact — a cardboard advertisement for Fischer Russian Caravan tea; a Kiddish cup from Connecticut and a challah plate from New Jersey; an etrog container from Israel and a velvet tefillin bag from Russia — Friedman frequented antique shops and secondhand stores, but not for personal gain or pleasure.

He was a man on a mission: to “rescue from oblivion” anything that had “even some remote historical Judaic interest,” or so explained Maurice Hexter, a close friend, in a moving eulogy. Harry G. Friedman’s “aim was to provide wider accessibility to all objects of the rich past rather than have these beauties monopolized by individuals who had large assets.”

These days, Friedman’s name and example live on in the Harry G. Friedman Society, whose members, a lively mix of Judaica enthusiasts, meet on a regular basis to discuss the latest scholarly discoveries as well as their own finds. And if Chaim Steinberger, a retired businessman with an abiding interest in modern Jewish history and the author of a forthcoming article about the storied collector, has anything to do with it, Harry G. Friedman will one day become as familiar a name as J.P. Morgan.

Meanwhile, the legacy of Rabbi I. Edward Kiev is kept alive at the George Washington University, my academic home, where his original collection of 18,000 books, printed ephemera, graphic arts and Judaica auction catalogues is ably stewarded by Brad Sabin Hill and avidly consulted by a latter-day generation of students, faculty and researchers. Rabbi Kiev, the chief librarian of the Hebrew Union College-Jewish Institute of Religion in New York, was saluted by the New York Times at the time of his death, in 1975, for having assembled one of the world’s major repositories of Judaica and Hebraica. While developing the seminary’s holdings, he drew on his “encyclopedic knowledge” to fashion a private library of his own, which his family generously donated to the university a number of years ago. “I see this collection,” said Dr. Ari Kiev, the rabbi’s son, “as a way of perpetuating the meaning of my father’s life.”

Wouldn’t it be nice if contemporary collectors would follow in the footsteps of Harry G. Friedman and those of the family of I. Edward Kiev? Now that would be something to crow about.