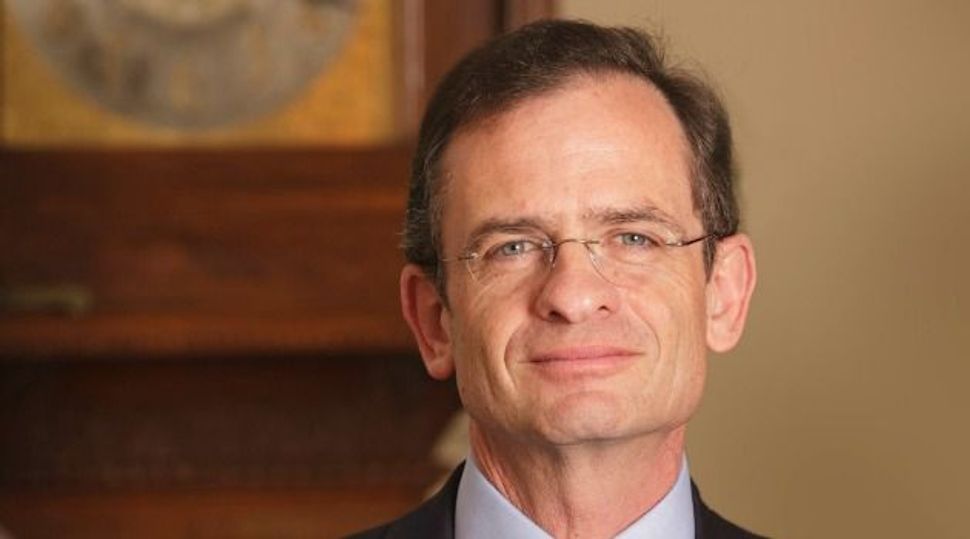 Visiting the Memorial de Caen museum in Normandy, France, in 1996, Daniel Weiss was captivated by eight photographs showing the public hanging of three partisans in Minsk, Belarus, on Oct. 26, 1941.

The two male victims’ identities were known, but the female was anonymous, and Weiss set out to learn who she was. By the following year, Weiss had co-authored an article in the journal Holocaust and Genocide Studies revealing that the 17-year-old’s identity — Masha Bruskina — was long known but suppressed because she was Jewish. In 2009, a new plaque was placed at the execution site with Bruskina’s name.

His research was off the beaten track, given that Weiss was then a professor of art history at Johns Hopkins University in Baltimore. In an interview with JTA, Weiss explained that he was motivated to ascertain the truth, just as when conducting research in his own field of expertise.

“I have wide-ranging interests,” said Weiss, now the president of Haverford College. “And when I saw that photograph, I was just drawn to it.”

The scope of Weiss’ career will expand significantly this summer when he leaves Haverford to become president of one of the country’s great cultural institutions, the Metropolitan Museum of Art in New York. As president, Weiss will be responsible for running much of the day-to-day operations of the third most-visited museum in the world, according to the London-based The Art Newspaper.

In 2013, the Met had $661 million in revenue, 2,547 employees and $3.3 billion in net assets. Besides its flagship building on Fifth Avenue in Manhattan, the museum includes the Cloisters Museum of medieval art uptown and next year will add a third site in midtown.

“It’s something like being the manager of the Yankees,” Weiss said of his new gig.

Those who know Weiss, 57, say he brings to the position a rare combination of art expertise, academic standing, business experience and leadership skills.

Raised in the New York City borough of Queens, Weiss possessed a commanding presence that was evident by age 5 or 6, when he organized the neighborhood boys in an army-like outfit and marched them in formation down the street, according to his mother.

Queens was also where Weiss saw his first masterpiece, Michelangelo’s sculpture “The Deposition,” at the 1964 World’s Fair. A moving sidewalk took spectators past the dramatically lit work — “an interesting combination of the celebration of Renaissance art and a tribute to modernity,” Weiss says.

Weiss went on to study art history at Johns Hopkins and earn his MBA at Yale. In 2005, he became the president of Lafayette College in Pennsylvania and, eight years later, took the same post at Haverford. He will depart after completing two school terms at the campus near Philadelphia.

On an afternoon in March, Haverford students entered the cafeteria for an event billed as “Donuts With Dan.” With a fire roaring nearby, the students encircled Weiss, their friendly banter with the ultimate authority on campus suggesting a sweet comfort.

“He’s very easygoing,” said Claire Dinh, a student council co-president who meets with Weiss weekly. “But if there’s something that needs to get addressed, he [does it] right away.”

For Weiss, a specialist in medieval art, the Met job brings his professional and geographic arcs full-circle. As a professor of art history, he brought his undergraduate students to the Met on field trips.

“It is one of the great cultural institutions in the world,” said Weiss, who calls himself culturally Jewish. “The opportunity to become part of an organization that has that kind of reach and that kind of capacity and that kind of talent – it’s a great place to be.”

The demands of running the institution may slow his latest intellectual endeavor: a biography of Michael O’Donnell, an American helicopter pilot shot down over Laos in 1970.

As with Bruskina, Weiss is delving into the life of a young person killed in wartime and deserving of acclaim. In his wallet, Weiss carries a poem composed by O’Donnell, and he reads it aloud for a visitor.

Weiss began exploring O’Donnell’s life after reading the untitled poem in a book. He located the friend to whom O’Donnell had sent his poem, then the soldier’s sister, and compiled every imaginable scrap of paper on the man.

The O’Donnell files are “an incredible, historical trove of documents that tell the story that the family has entrusted to me, and so I feel bound to do that — like for Masha — because it speaks to me,” Weiss said. “I guess I’m drawn to stories about courageous people who have sacrificed and whose stories aren’t otherwise told.”