Why Are There So Many Jewish Feminists? 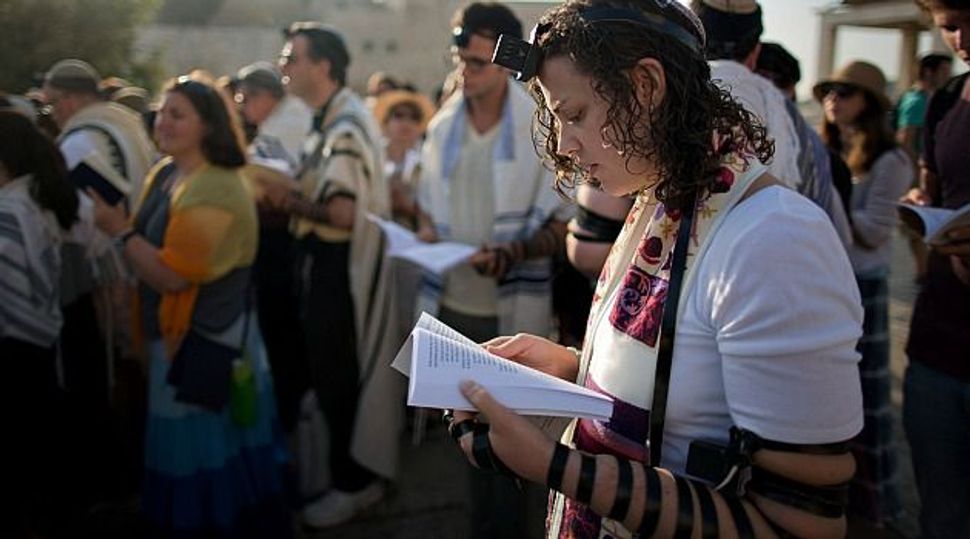 The Jewish Women’s Archive recently launched an online exhibit called Jewish Women and the Feminist Revolution, which uses a timeline, interviews and scans of historical artifacts to look at the contributions of Jewish feminists to Jewish and American history. (You can see it at here It’s annoyingly full of bells and whistles and zippy little floating boxes and animations, often at the expense of any real depth, but it did get me thinking: Why have so many leaders in the feminist movement been Jewish?

Relatedly: Why do so many women today believe in the tenets of feminism, yet resist calling themselves feminists? And what can we do to raise kids who believe in equal rights and equal responsibilities?

As Naomi Wolf pointed out in the Fall 2005 issue of Heeb, feminism and Judaism go together like Courtney Love and hitting people with microphones while screaming in a drug-addled, spittle-flecked, nipple-revealing manner. (Okay, she didn’t put it quite like that.) Wolf did say, “We have a political history going back to the socialist and labor movements, where women were organizers and rabble-rousers,” which is close.

Even earlier, back in the 17th century, Glückel of Hamelin was a mother of 14 who ran a factory and expanded her husband’s business internationally after his death. In the 19th century and beyond, the wives of talmudic scholars ran businesses to support their families while their husbands studied. The notion of an indolent Jewish princess lounging on pillows in her Jewess Jeans while eating bonbons and contemplating her upcoming rhinoplasty is a relatively new one. We’ve always been working women.

Furthermore, our oral tradition always has encouraged argument and debate. We’re a verbal people. An article in New York magazine last month hypothesized about whether there actually is a genetic basis for Jewish intelligence. I think it’s more likely that we’ve simply worked our (curvy) butts off. As outsiders (or as people who’ve perceived ourselves as outsiders), we’ve stressed education and intellectual achievement as the means to success. And maybe Jewish women, who’ve always been or felt like The Other, have felt they had less to lose by stirring things up. What, we’re gonna risk our chance to go on the hayride with Biff if we don’t act dippy and helpless? — Biff was never going to ask us on the hayride anyway! What, if we do that we’ll be seen as pushy? — We’re already seen as pushy! Finally, our people’s tradition may have made us particularly attuned to injustice, in our own homes as well as in the larger world. Perhaps for all those reasons, we Jewish women have been particularly well represented in the leadership of the feminist movement.

Like many third-wave feminists, though, I get annoyed at many Generation Y women. Lots of us do take the gains won for us by our predecessors for granted. Younger women are less likely to be pro-choice than women over 50 (perhaps because only the latter can remember a time of young women bleeding to death in bathtubs after back-alley abortions). For the first time in decades, more new moms are leaving the workplace; labor-force participation of moms with kids under age 1 recently dropped to 55%, which is the first slide since the Census Bureau began tracking these numbers in 1976. You could argue that feminism has done its job; women truly have choices now, and more are choosing to stay home. Or you could wonder whether young women are backing off the struggle for equality.

Nowadays I think about Betty Friedan’s 1963 book, “The Feminine Mystique,” and its portrait of frustrated housewives failing to find fulfillment through home life alone. And truly, sometimes I think we’re returning to that world. The media love to talk about Mommy Wars and tension between working mothers and stay-at-home mothers, but what I see is a world of women isolated and feeling like freaks, just as they did back in Friedan’s day. Yes, more women are staying home, but they see it as a reaction to feminism rather than as a benefit of feminism. And I read the parenting message boards, with their defensive, depressed stories from moms feeling trapped at home all day with kids, freaking out that they’re not stimulating their children’s brains every minute, taking swipes at working women. And I hear my friends who work talking about the guilt they feel, whether they have to work for economic reasons or to keep their brains will from shriveling like Karl Rove’s heart. And women on both sides still don’t see that their problems aren’t theirs alone.

We haven’t internalized, as our predecessors tried to teach us, that the personal is political. We’re not alone in our desperate attempts to balance work and personal time and relationships and the struggle to keep the dust bunnies from becoming so large that they eat the cat. By focusing on The Mommy Wars and the straw man of “choosing to work” and “choosing to stay home,” we ignore the fact that other countries have humane family-leave policies and good universal child care. “Opting out” becomes a class issue (someone is still supporting those stay-at-home lady lawyers and executives); women who work because they need money are simply left out of the equation.

The JWA’s online collection features a copy of the original magazine layout of Alix Kates Shulman’s seminal (ovarian?) “A Marriage Agreement” from 1970. This document suggested that men and women should share the tasks of raising kids and keeping house. Shocking! Today, at least, though that snarky little Caitlin Flanagan may misrepresent what Shulman’s article said, many of its principles are now taken for granted. Men know that they should do more around the house. Some, like my Quicken-using, brisket-making husband, even do. Yet change has been awfully incremental.

Bottom line, those feminists had some bad hair and some embarrassing music and some reductive, doctrinaire ideas. But we owe them a huge debt. (And you didn’t have to be a feminist to have had bad hair in the ’70s.) Today, though, younger women don’t see that feminism speaks to them. Boring issues like childcare and health care and even choice don’t resonate. Teens and 20-somethings believe in a nebulous concept of equal rights; they revel in the hip-twitchy, man-bewitch-y Jessica Simpson cartoon portrayal of empowerment. They think, “I can do anything! But I’m not a feminist, because I shave my legs and wear lipstick!” (O, little sisters, feel my legs and admire my Chanel Glossimer.) And even young women who do identify as feminists tend to choose body image as their big issue. It’s sexy. Wider change often isn’t.

So, how will I raise my girls to emulate Lisa Simpson instead of Jessica? How will my husband and I counteract a consumerist, spiritually bankrupt culture that seems to tell girls their value is in how they look as much as in what they do?

I dunno! I’m figuring this out as we go along! And we only have so much control. I won’t be able to stave off their awareness of Barbie and Bratz dolls indefinitely. But we can talk about jobs, and the personal and economic fulfillment Mommy gets through work. We can talk about gender, and listen to “Free to Be… You and Me,” and buy Raphael a toy electric mixer for his birthday, and have play dates with Henry and his toy trains. We can make it clear to our girls that we love them for their brains, humor and kindness as well as for their fetching curls. We can point out women police officers and firefighters. We can be sure they see Mommy get out the toolbox to put together the beeping multipart epilepsy-inducing flashing monstrosity that is the high-tech bouncy seat; we can make sure they get to hold the dustpan while Daddy sweeps the kitchen floor. And most of all, we can teach our girls self-respect and the value of standing up when they see injustice. And then we’ll send them out into a half-changed world, and hope they continue to make it better for their daughters.

Marjorie Ingall was the East Village Mamele for the Forward.

Why Are There So Many Jewish Feminists?