Aunt Linda had stocked up on kosher food to last for the duration of the Sabbath. But when Saturday night came around, there was no more kosher food left and I was hungry.

On Saturday evening, we couldn’t find an open kosher restaurant, so I suggested that Aunt Linda, my elder brother Israel and I drive to Stop & Shop to look for kosher frozen pizza. It was the winter break of 2003, and Israel and I were leaving for a trip to Florida the next morning.

I scanned all the aisles, but I couldn’t find anything that had an O.U. marked on it, which meant that the food had been certified kosher by the Orthodox Union. I was the only one who kept kosher: Israel, who was then 19, had left our ultra-Orthodox family in Monsey, New York, a year earlier and moved in with our father’s nonobservant sister in Bellmore, New York, on Long Island. I still lived at home.

Our search for food had been going on for close to two hours. We were all frustrated. I wished there were a pill that would substitute for a meal, like the manna in the Torah: God wanted to show the Jews how great He was, so He filled the desert with bread and meat. Exodus 16:12: “Then you will know that I am the Lord your God.” My rabbis had taught me that you could ask God for anything –– pizza, ice cream, candy –– and it would literally drop from the sky. But nothing was falling from the sky on Long Island.

My aunt asked me if the food had to be kosher. “I don’t know,” I said, wishing there were no such thing as kosher or nonkosher.

My aunt pressed me again: “Does it have to be kosher or not?”

I began to realize that I wanted something nonkosher, but I was too afraid to admit it. It wasn’t like I hadn’t broken religious rules before. When I turned 13 and switched to an Orthodox high school that was more modern than my yeshiva — where boys watched TV at home, read secular books and talked to girls — I began to wonder if God would really hurt me if I didn’t listen to Him. So I started to test Him. One morning at school, I moved my yarmulke, which was at the back of my head, a few inches closer to the front of my head. Then I started secretly listening to Howard Stern on the school bus; my rabbis had taught me that it was forbidden to listen to the radio. I was fascinated by the fact that Stern was a Jew. That got me thinking: If Howard Stern is Jewish — and he practically sinned every day with the topics I heard him talk about — why hadn’t God killed him yet?

Which was why, when Aunt Linda began questioning the laws of eating kosher, my defense was meek. “Why is it kosher?” she yelled. “Because there’s a rabbi standing over the food, blessing it while it’s being made? Why don’t I just bless the food?”

“My rabbi taught me that women aren’t allowed to bless the food,” I said. My aunt walked away, annoyed.

Then I had an idea. “Well, maybe I could eat something if I don’t know that it’s not kosher,” I said. I repeated what I’d learned in Talmud class: If a Jew buys a kosher hamburger, say, at an airport, and leaves the table to wash his hands and make a blessing, and someone switches his burger with a nonkosher one while he’s gone, it’s okay if he eats that burger.

That logic excited my aunt. She told me that she’d go into a pizza shop and buy the food for me and I wouldn’t have any idea that the food was not kosher. I had second thoughts, but I was hungry, so I agreed.

We drove to Stella’s Pizzeria, on Merrick Road. Aunt Linda asked me what I wanted. I told her a mushroom slice. Aunt Linda and Israel went inside as I sat in the back of the car, waiting for God to blow it up, or to blow up the pizza shop, or both. In my 15-year-old mind every rabbi I’d ever had in yeshiva was shouting at me that I was sinning. I was disappointing my parents and the community.

My heart raced as I watched Aunt Linda pay and waited for God to strike her: He’d take an arm off, or sever her head, or her body would just disappear in front of me. I was scared for my brother, too. Just being in the store with my aunt made him an accessory to my downfall as a kosher Jew. My stomach was in knots, and I couldn’t tell if I was hungry anymore.

When Aunt Linda and Israel got back into the car, I was too nervous to look at them or the box of pizza, which Israel held on his lap. I could already see the news headline: “Orthodox Jew Buys Nonkosher Slice of Pizza and Is Immediately Killed on the Way Home.” Then, I thought, you will know that I am the Lord your God. Then you will know.

Back home, Israel placed the pizza box on the dining room table. I asked Israel if he’d take out my slice, and he said: “No. I don’t want to get involved.” My aunt told us we were both nuts, and put my mushroom slice on a plate.

I picked up my slice and took the first bite. Aunt Linda asked me how it was. I told her it was pretty good. But I wasn’t honest. It tasted incredible, better than any kosher pizza I had ever tasted: tasty tomato sauce, thin crust, fresh mozzarella cheese and a heavy dose of mushrooms. But I didn’t want to come off as cocky, just in case God was playing a trick on me.

I finished the slice, and thought, please forgive me, God. Just this once. I’ll study more, pray harder and do mitzvahs. It’s just a stupid slice of pizza.

The next day, Israel and I went to Florida. We spent full days at Universal Studios, riding roller coasters and playing at the arcades. I traded in my yarmulke for a baseball cap. I had nonkosher pizza for nearly every meal.

More than a decade later, I’ve made a full break from the religious fold, but my fears haven’t disappeared completely. When I grew up, I was taught that if I disobeyed any of God’s commandments He’d most likely kill me. The feeling that God is out to get me has persisted; I wonder if it will ever go away. I already know what my epitaph will read: “Dead. But still worried.” 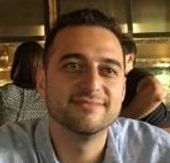