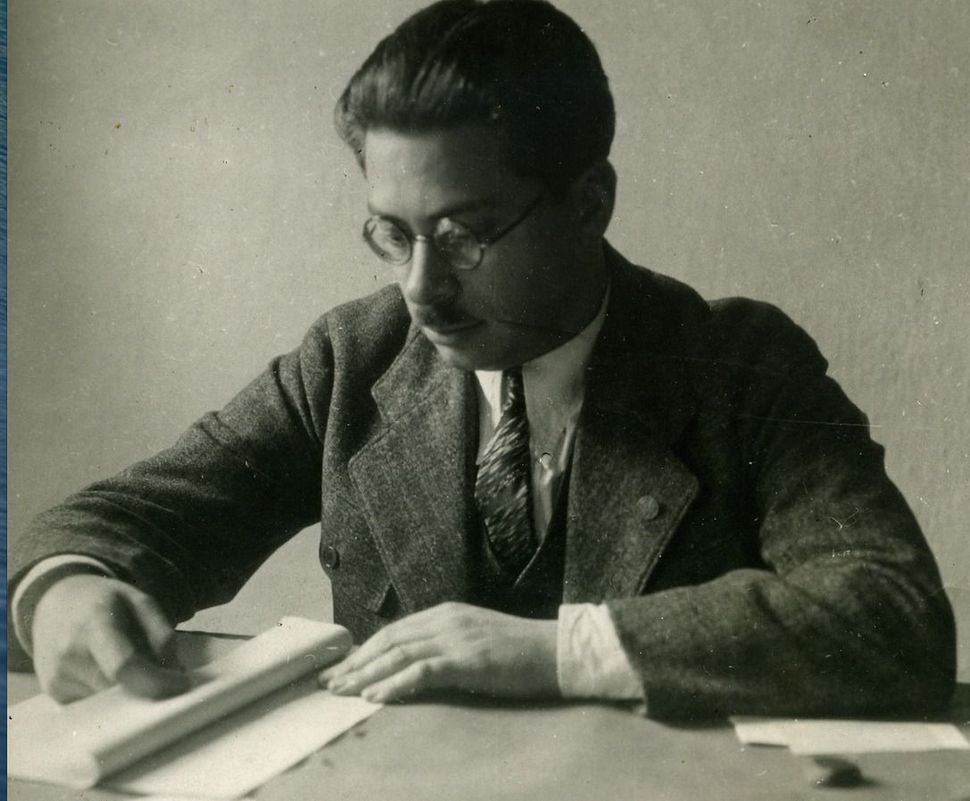 Founding Father:Max Weinreich was a driving force behind YIVO. Image by Forward Association

As it stands today, the YIVO Institute for Jewish Research is the brick-and-mortar memory of East European Jewry. Photographs, letters, theater placards, diaries, institutional records, and rabbinical responsa are just some of the documents in its collection. Measurable in archival feet and inches, catalogued by numbers and letters, its walls contain the record of Ashkenazi civilization. A new book, “YIVO and the Making of Modern Jewish Culture” by Cecile Esther Kuznitz, offers a cogent and beautifully-researched account of this institution’s beginnings between the World Wars: the act of collecting that was at its core, and the intellectual commitment to reframing Jewish culture that nourished the vision of its founders.

In its earliest rendition, YIVO (an acronym for the Yiddish words Yidisher Visnshaftlekher Institut, or Yiddish Scientific Institute) was not an archive alone. As its founders conceived it, YIVO’s mandate was to create the tools to perpetuate life in Yiddish. About 11 million East European Jews claimed Yiddish as their native tongue after World War I. But many of them would learn the languages of their host countries — mostly Polish or Russian — to pursue their education and professions. Yiddish was rapidly falling away.

Founded in 1925, YIVO presided over a kind of Yiddish-language ecosystem in Poland. With its own cultural and scholarly goals, it created symbiotic relationships with other institutions, like the Yiddish-language school system and teacher seminaries, while it also fashioned new spheres of activity where people could speak Yiddish as naturally as they breathed. With time, YIVO published books, curated exhibits and hosted classes. There was even talk of a Yiddish university.

YIVO’s approach to Yiddish also reflected the Minorities Treaties of 1919 that promised the protection and even financial support of ethnic minorities living in the newly independent states of post-World War I Eastern and Central Europe. For Yiddishists, it seemed like this was their moment.

While Zionists advocated migration to Israel and socialists believed Yiddish was a temporary instrument of propaganda, Yiddishists wondered, “Why not remain in Poland but live in Yiddish?” For their critics, such thinking was a form of “do-ikayt,” Jewish “hereness,” or inertia. For champions of Yiddish, it was a deliberate and precise vision: the guiding principle of Diaspora nationalism, an ideology that promised to sustain the closest version of the satisfying lives they already had.

Decidedly above politics, YIVO’s founders understood themselves to be in a close and reciprocal relationship with a broad base of supporters. When he first imagined the institution in 1925, Nahum Shtif, an impoverished linguist who toiled in the reading rooms of German state libraries, first believed it would be forced to rely on a wealthy American donor. Perhaps, he thought, a German institution would invite a Yiddish institute such as the one he imagined to share its resources. But Shtif was disappointed on both of these fronts.

YIVO was grassroots, and spontaneously so. Its initial financing came in the form of worn envelopes with zlotys and groshen pooled by small shtetl communities or individuals. Think of it as Kickstarter, circa 1925. Many who sent money would never know what it meant to scan the index of a book or thumb through a card catalogue. By 1933, however, the institute had raised enough funds to move into its permanent headquarters on 18 Wilwulski St. in Vilna. It chose the city instead of the more cosmopolitan Warsaw or Berlin because of the close contact it allowed with supporters who were instinctively hungry for its presence in their cultural lives.

YIVO’s most important relationship to “the folk” was facilitated by collectors, or zamlers. So scarce were sources for the study of East European Jewish life that before analytic research could be done a collection needed to be assembled and catalogued. With time, virtually every division of the institute enlisted the aid of volunteer zamlers: They sent in vocabulary for the Terminological Commission, current publications for the Bibliographic Center, historic documents for the Historical Section, and archives and data for the Psychological-Pedagogical and Economic-Statistical Sections. At a 1928 meeting, Max Weinreich, one of YIVO’s founders and already a scholar of international renown, noted: “Daily we receive shipments for all branches of the institute from various friends from all over.”

Zamlers, who had little face-to-face contact with YIVO workers, addressed them with a visceral and personal fondness in their letters. Kuznitz quotes a young correspondent who sent in folktales for the Ethnographic Commission and signed his letter, “From me, your best friend and colleague, Tuvye Yosef, pupil in the fifth grade.” “Here we are surrounded with a circle of colleagues who poke and rummage everywhere and in every corner,” another letter reported on the camaraderie among zamlers in Grodno.

The educated elite of YIVO and common Yiddish speakers were mutually reliant. Those involved in YIVO understood that the spokenness of Yiddish alone would not save it, that the language needed a radiating scholarly center. Moreover, YIVO’s scholars who might have written in languages that commanded larger numbers of readers — say in Polish, like the Jewish historian Majer Balaban — derived a kind of sublime and unnamable pleasure from the exchange of ideas in their native tongue. This might have had more to do with sentiment than with reason, but reason did not carry the day in 1925.

In her reconstruction of YIVO’s first years (from 1925 to 1939), Kuznitz’s book is a virtual “who’s who?” of the Yiddish scholarly world. The institute’s founders included Russian-Jewish historian Simon Dubnow, already an elder statesman of the field, and Emanual Ringelblum who, during World War II, went on to lead a team of historians to record and then bury the horrors of the Warsaw Ghetto in milk cans. Zalmen Reyzen, known best for his “Encyclopedia of Modern Yiddish Literature,” a project of unprecedented scope, also served as an editor of YIVO’s landmark periodicals, YIVO Bleter and Yidish filologye, each issue of these packed with riches essential even today to anyone researching the topics they cover.

YIVO’s scholarly reach extended far beyond Yiddish language and linguistics to areas like East European Jewish history, whose study was formed by YIVO historians like Elias Tcherikower, Raphael Mahler and Jacob Shatzky. They formulated its questions, indicated its most vital sources, and represented them to the larger scholarly world. And, yes, all in Yiddish. The Yiddish language put them into a conversation with one another and allowed a fluid flow of ideas between their writing and their mostly-Yiddish primary sources. Relevant documents that were in other East European languages were translated into Yiddish in order to establish Yiddish as YIVO’s primary linguistic arena. In all this and more, their intellectual output was monumental.

These same scholars blessed YIVO with what seems like a boundless appetite for administrative duties. Kuznitz’s research is particularly sensitive to the institute’s surviving documents that tell this part of the story. They reveal that YIVO’s executive answered inquiries with a patient and cordial formality, solicited funds, kept detailed financial records and, when necessary, learned how to keep afloat on the brink of bankruptcy.

By 1933 they had made Vilna the center of the Yiddish world. Vilna had already brimmed with old world rabbinic pedigree, but YIVO solidified its vitality as a secular cultural center of the present and future. “I gasped with astonished pleasure at its uncluttered spaciousness,” wrote the American historian Lucy S. Dawidowicz about her first impression of YIVO’s new facility, when she spent a year in YIVO’s aspirantur training program in 1938. She compared it to the New York Public Library and notes that “each seat [in the reading room] had its own built-in tubular fluorescent lamp.” Could there be higher praise for an institution all of 13 years old?

While YIVO is clearly an “against the odds story,” Kuznitz is not in the thrall of a heroic tale. Moreover, she does not include details about YIVO’s destruction during the war or the murder of East European Jewry, which is to say, most of YIVO’s constituency, including teachers and researchers. Nor do we hear about the dramatic salvage and retrieval of some of YIVO’s collection. This story is for a different day. Instead, Kuznitz’s narrative tracks the institution’s gradual rise, generated by a steady accumulation of on-faith gestures, acts of ingenuity, and an insistence on doing things as its founders thought they must be done.