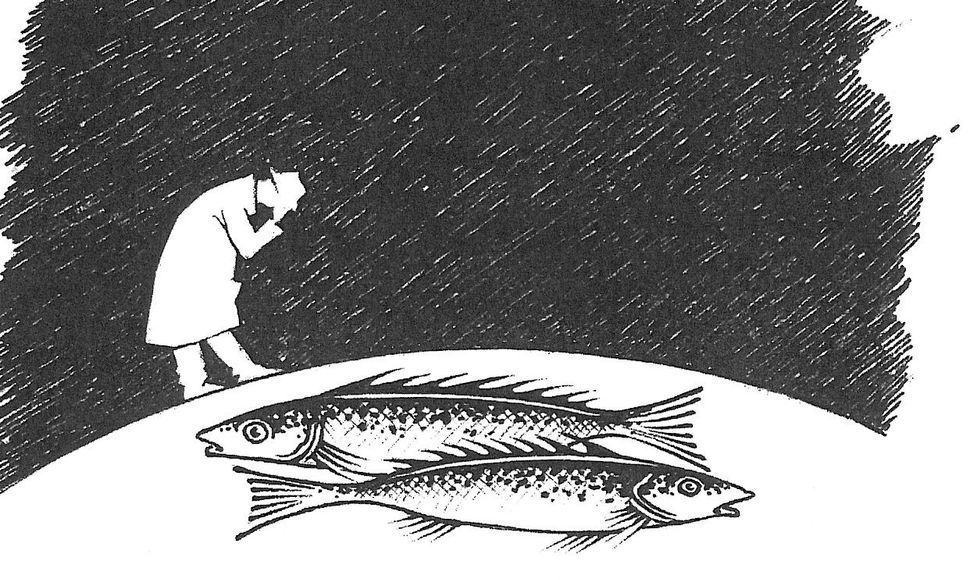 The poet Yisroel Shtern (1894-1942) was reluctant to publish his own work, once writing about the “over-proliferation of books on this planet.” Nonetheless, in a 1929 dictionary of Yiddish writers, Zalmen Reyzen called him “one of the most important young Yiddish poets in Poland today, though for a full appreciation of his poetry… we must await its collection in book form.”

A resident of the Warsaw Ghetto, Shtern was martyred in 1942, though the exact nature of his death is unknown. While a partial selection of his work appeared in 1955, only in 2014, thanks to electronic cataloging, digitized media, the Internet and, most of all, the indefatigable labors of scholars around the world, did a true collection of Shtern’s work appear. “Yisroel Shtern: Collected Poems Warsaw 1919 – 1939” includes 71 poems and 11 arresting black-and-white drawings by Sharyn Madder. Its sensitivity, care and beauty provide a fitting legacy for this tortured, devout figure.

Born into poverty in the town of Ostrolenka, on the border of Congress Poland and Lithuania, around Shavuot in 1894, Shtern studied to be a rabbi in the yeshivas of Lomza and Slobodka, among other places. When World War I began, Shtern was in Vienna and was interned in a prison camp because of his Russian citizenship. Later he returned to Warsaw, eking out a living with unclear means of support. For weeks at a time he would disappear, reappearing later with a completed poem or essay. “All that was known,” we are told in Yitzkhok Niborski’s learned introduction, “was that he lived in extreme poverty, often going hungry.”

Shtern was bent over and chronically ill, and published his poems infrequently and unenthusiastically — writing for himself, not for the world. In one of his poems he records his rule, wish, or perhaps desire that his work be locked away for good. If he ever did allow someone into that locked space, he would show them only a “hidden door.”

His contemporaries saw him as an ailing, depressive thinker — a frum, penniless dreamer. In an article published in 1956 in the literary journal Goldene Keyt, the high-water mark of Yiddish modernism edited by Avrom Sutzkever, Rokhl Auerbach recounts a story from Shtern’s time in the Warsaw Ghetto, when he dropped into the soup kitchen and asked her if the food was kosher.

“We don’t have any meat and don’t have any milk either,” she responded with surprise. “What could be treif about it?” (Later, when the soup kitchen acquired horse bones for use in the soup, she had to inform him that the food was now “glatt treif.”) Such a meeting of deep ideals and naïveté was characteristic of Shtern.

Shtern’s work is chiefly concerned with universal motifs of death and destruction. Moons hang themselves on telegraph wires. Night hides itself away. God himself slams the door without a goodbye, on the way out of a patient’s hospital room. “Black nights pour onto the ground like coal. Suddenly / they glow with a bright flame – a human being’s inside.” Despite his punctilious religious observance, his most famous poems do not take place in a Jewish milieu, not in a synagogue and not in a house of study, but in the hospital, where identities are erased: “We’re the world’s stones,” say the patients in one poem. “We nap under white blankets / like streets under white snow.”

Shtern’s religious voyages of the imagination are accompanied by a preoccupation with illness and healing, death and life in the sick house. In addition to his classic long poem, “Spring in the Hospital,” he wrote pieces titled “The Sick” (“You are the great seekers!”), and “Song of the Asylums,” where the poet addresses the asylum inmates: “Your days are empty holes / Your luck is mis-sewn buttons.”

What takes place in Shtern’s hospital, however, is not a narrative of sickness and cure in the first person, though the poet was also chronically ill. His depiction is a general one, a Kabbalah of illness.

In this milieu, time stands nearly still. The sick experience transformations, there is recuperation and death, yet the atmosphere remains. The timelessness outlines a possible universe where illness and disability redeem the world’s pain. “Is it a wonder, that the ill are pure and gentle / looking into the distance, seeing what no one else sees / lying late at night, smiling into the darkness / happily smoothing their beds, since they’ve solved a puzzle?”

Why did such hospitals in interwar Europe figure in Shtern’s work? According to Sunny Yudkoff, whose doctoral thesis treats this question, that period saw an increasing number of facilities for tuberculosis patients and the widespread belief that the fever propelled creativity. Perhaps — and this is my speculation — the spread of these facilities was also a reaction to the world’s disorder, and the resultant psychosocial stress.

The redemption that Shtern sees in the hospital is more than a single shaft of light in the midst of his dark world. His work is full of death and despair — but altogether illuminated by a strange, pious, quiet beauty that the reader suddenly sees all around after closing the book.

Yitzkhok Niborski’s introduction to this collection is scholarly, intellectual and precise, emphasizing the biographical over the stylistic aspects of the writer, though the latter is not overlooked. Understanding Shtern’s universal poetry in the framework of his strict observance remains a task for future critics.

But an even more serious question, which should not be ignored, is who will read this volume? It is eye-catchingly produced, with the spare, black-and-white illustrations, online translations and other accompanying material. I worry, however, that this is not enough; I have the sinking feeling that the dark poetry of Shtern’s is too gloomy even for today’s Yiddish studies experts. But who knows? The publishers of this collection, above all editor Andrew Firestone, deserve our gratitude, and — why not? — a thank-you note from the next world, from lips reciting poetry in an unknown ghetto grave.

Zackary Sholem Berger is a poet and translator in Baltimore working in English, Yiddish and Hebrew. This piece originally appeared in the Yiddish Forward in slightly different form.