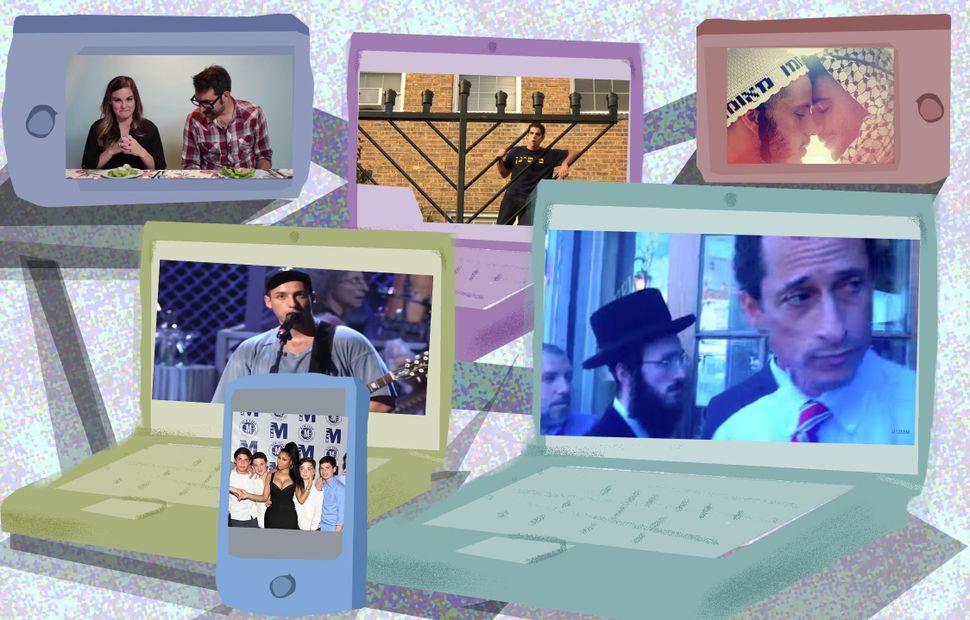 Adam Sandler first performed his now-ubiquitous anti-alienation anthem on the “Saturday Night Live” sketch, “Weekend Update,” in 1994, a full decade before YouTube’s 2006 launch. But the song is one of those pre-Internet cultural objects given new life in cyberspace. Count up the views on various versions online and the total tops 5,000,000. Has anybody not heard it at this point?

There are plenty of University of Michigan-specific references in this Jewish American Prince/Princess-themed parody of Kid Cudi’s 2009 hit “Pursuit of Happiness.” But there are also lyrics about “Jewish bling,” BMWs, Birthright trips, and bagels that resonate beyond Ann Arbor city limits. “We didn’t really mean any harm to anyone. It was just supposed to be a fun little project,” one of the video’s stars told a campus TV channel. “Pursuit” has now been viewed over 689,000 times.

Hillary Rodham Clinton was in the White House Situation Room with the president and other advisors on the night Osama bin Laden was killed. When the Orthodox Brooklyn newspaper the Tzeitung ran a photo of the event, though, the secretary of state was replaced by a conspicuous, blurry splotch. After a blogger pointed out HRC’s disappearance, the paper issued an apology — for running afoul of White House anti photo-manipulation policy. On the subject of erasing women, however, the paper was resolute. “The readership of the Tzeitung believe that women should be appreciated for who they are and what they do, not for what they look like, and the Jewish laws of modesty are an expression of respect for women, not the opposite,” it said, in a statement. The incident was covered by the New York Times, the Guardian, the New Yorker, CNN, TIME, Bustle and Reason, among many other outlets.

Anthony Weiner Shouts Down a Voter, 2013

Weiner’s career in Congress ended after he sent one of the most infamous tweets of all time: an up-close photo of his [insert your favorite euphemism for male genitalia here]. This fact all but guaranteed that his comeback run for mayor of New York would light up the Internet. And it did, thanks to a random, yarmulke-wearing guy who walked up to the candidate in a Brooklyn bakery and said, “You have a nerve to even walk around in public.” Weiner replied, “You’re my judge? What rabbi taught you that?” which sparked a finger-pointing, faces-inches-apart shouting match straight out of a David Mamet play. Spoiler alert: Weiner lost the race.

BuzzFeed grew into an $850 million juggernaut by creating frothy, highly shareable content. And, in this case, you can see why. Watching goyim eat kugel, matzo ball soup, and chopped liver is exactly the kind of lighthearted, hilarious clip you want to send to your friends. It has clocked more than 4,700,000 views.

Was Madonna’s Instagram of two almost-kissing men — one Israeli, one Palestinian — a sincere celebration of conflict-transcending love? Or merely a new-media experiment from a seasoned provocateur? In either case, the Material Girl was tapping into a rich stream of viral content usually marked with the hashtag “#Jewsandarabsrefusetobeenemies.” Madonna added “#rebelhearts” instead (a reference to her latest album, “Rebel Heart”).

By now, there’s been enough viral bar and bat mitzvah-related content to inspire a doctoral dissertation or two. And we can add a chapter on the countless posts, tweets, photos and videos about Nicki Minaj’s performance at a swanky celebration at Manhattan’s Pierre Hotel. So far, 486,000 people have “liked” Minaj’s Instagram pic of the rapper/singer standing with the man of the hour. Her caption: “With my new boy toy at his Bar Mitzvah. Hi Matt! Mazel Tov!”