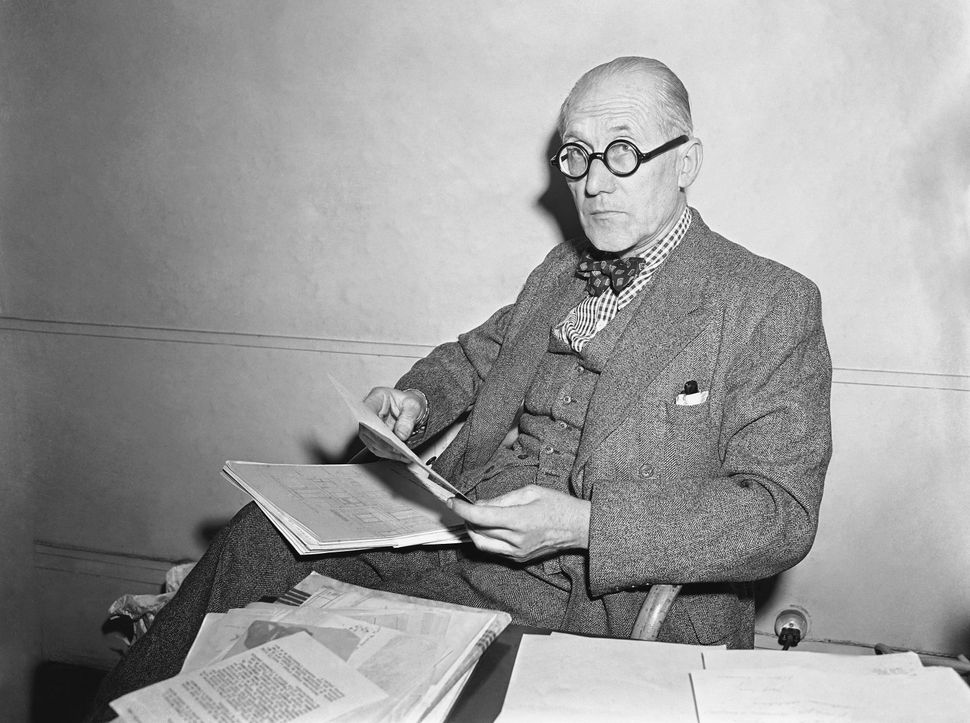 Le Corbusier — the Swiss-French master of modernist architecture — was a fascist sympathizer who had an office in Vichy during the Second World War and displayed anti-Semitism in his private correspondence. But an exhibition currently running at the Centre Pompidou in Paris, “Le Corbusier: Mesures de l’homme,” won’t tell you any of this.

The revelations about Le Corbusier’s political beliefs have come to light in books published this year — 50 years after his death — including “Le Corbusier, un fascisme français” by Xavier de Jarcy and François Chaslin’s “Un Corbusier.” These studies of archived material sparked a national debate in France over the architect’s legacy and exposed the connection between Le Corbusier, anti-Semitism, fascism and the Vichy regime.

During the 1920s Le Corbusier, along with his friend, the doctor Pierre Winter, became tied up with Le Faisceau, a short-lived fascist party with sympathies for Mussolini, and later the Parti fasciste révolutionnaire. With Winter, in the 1930s, Le Corbusier created the architectural journals “Plans” and “Prélude.” It was in these journals, de Jarcy uncovered, that Le Corbusier wrote pieces in support of Nazi anti-Semitism and contributed other “hateful editorials.”

His private correspondence from the period demonstrated support for Italian fascism and Nazism. “Hitler can crown his life with a great work: the planned layout of Europe,” he wrote to his mother in October 1940. Le Corbusier also made overtures to Mussolini. In 1934, Le Corbusier was invited to Rome by Mussolini to lecture, and that same year he attempted to meet the Italian dictator in order to get the job of designing Pontinia, a new town built on drained marshland. Two years later, and three months after the Italian conquest of Addis Ababa, the architect wrote to Mussolini offering his vision for a future planned city in Ethiopia.

And then comes Vichy. Between 1940 and 1942, Le Corbusier sought work in this rump puppet state run by the loathsome Maréchal Philippe Pétain, the cowardly Lion of Verdun. He kept an office in Vichy, and drew up plans there for the regenerations of Algiers — a city he described as “the leprous sore which had sullied the gulf and the slopes of the Sael” — that were ultimately rejected. His Unité d’habitation in Marseille was later seen as “as a perfect expression of the Fascist program” by vichyistes.

Need it be said that a man with such close ties to fascism had none-too-savory views about Jews? As early as 1910, he wrote to a friend to discuss installing “smoking rooms for fat Jews.” In August 1940, in correspondence with his mother, Le Corbusier wrote, “money, Jews (partly responsible), Freemasonry, all will feel just law.” He wrote of 1943, which came during the period of mass deportation of Jews from France to the extermination camps of the East, as “a year in which nothing special happened.”

“Le Corbusier: Mesures de l’homme” does not touch on any of this. It chooses to present the architect’s development and evolution within the artistic and architectural context of the age. Le Corbusier, the exhibit claims (in a purple and near-incomprehensible language that only exists, and indeed thrives, in art galleries), “drew on the organic laws of human perception and cognition to define the principles of a multi-faceted creativity at the origins of modernism.”

This included a design principle Le Corbusier named the Modulor, a system of measurement on the scale of the average man that he became oddly obsessed with after he conceived it in 1943. This Monsieur Tout-le-monde, or Everyman, with a height of 183 cm, or 226cm with his arm in the air, was presented by Le Corbusier as a matter of philosophical, scientific and historical fact, since he claimed it to be based upon classical systems. The Modulor would be used in the conception of his greatest work, the Unité d’habitation— perhaps the finest piece of modernist architecture built in Europe in the 20th century — as well as the planned city of Chandigarh in northern India.

What the exhibition should say, but doesn’t, is that the Modulor was born 1943, in a period in which two ideologies dominated Europe with ideas related to the perfectibility of man and the standardization and rationalization of the human form: communism and fascism; homo Sovieticus and the Aryan race. Modernism had been rejected by the Nazi regime as degenerate, but its principles echoed through many of their grand design projects, including the colossal beach resort at Prora. The connection between totalitarianism and an architectural form that seeks to shape man rather than be shaped by man’s needs is inescapable.

Given Le Corbusier’s fascist sympathies, this seems like a rather important concept and connection to leave out. With all we know about the architect, to try and explain his work, and especially the Modulor, without considering both the political and historical context in which he operated, as well as his own ideological sympathies, is fundamentally dishonest and a total obfuscation. It makes the exhibition a grand lie.

“Le Corbusier: Mesures de l’homme” believes itself to be innovative to the extent that modernist architectural principles are rarely considered with the human dimension in mind. The exhibition, therefore, is an attempt to humanize and personalize the work of a man considered detached and theoretically-minded. If the curators have managed to achieve this goal — and that much is disputable — it is only by excluding elements of his biography they must have deemed problematic, that would undermine the image of Le Corbusier they are trying to shape of him as paternalistic and humanistic.

Everything that is difficult has therefore been erased, and for shame, since the curators have barred the patron from an opportunity to understand Le Corbusier’s work in full. Without an actual examination of the relationship between Le Corbusier’s architectural and political ideas, his Modulor and his vichyisme, this exhibition is more or less worthless.