Sketching Life With a Rare Disease 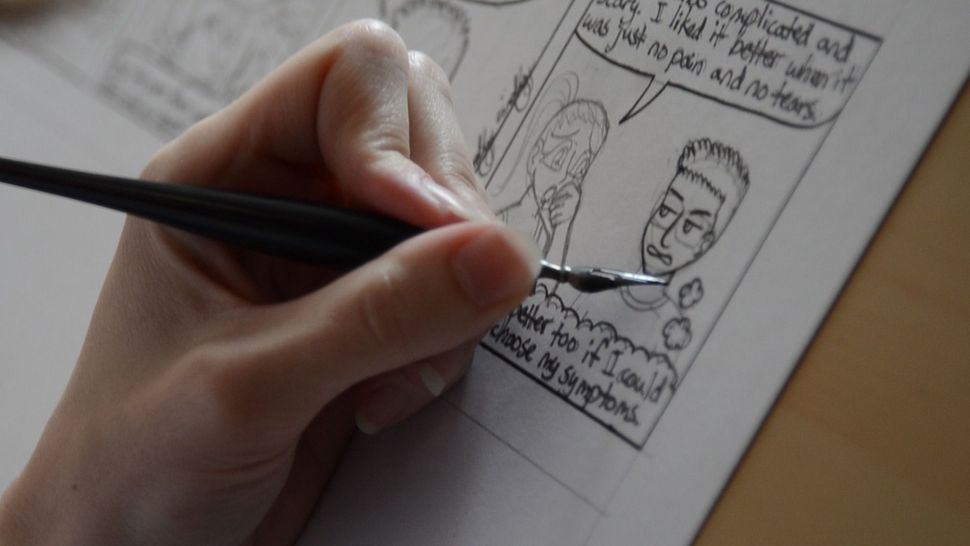 Touch of Art and Humor: The cartoons about life with familial dysautonomia reach beyond the FD community. Image by Thea Glassman

Mindy Indy sits in her apartment, head bent over a large piece of sketch paper, carefully outlining a young boy’s glasses with her ink pen. She’s already penciled out the scene — two teens sitting on a porch, as the boy tries in earnest to explain the symptoms he experiences from familial dysautonomia, a Jewish genetic disease that affects the autonomic and sensory nervous system. His companion, a girl with a ponytail, doesn’t seem to quite get it, and Indy labors over his reaction, trying to make sure his gritted teeth looks equal parts frustrated and bemused.

It takes the Manhattan-based cartoonist a few hours to create the four panel sketch, “No Tears: Life With FD,” a comic exploring the daily life challenges of those afflicted with familial dysautonomia. Indy, who had no prior knowledge of the disease before she got this weekly gig, is now a fixture in the community — making appearances at FD Day, pen and paper in hand. “I sketch whatever the kids and teens want, like their favorite characters,” she said. “Sometimes they’ll tell me how much they love the comics and how they share it all over social media.”

The series, written by David Brenner, executive director of the Dysautonomia Foundation, has been published weekly since January 2013 and was born — fittingly — at a comic book convention. Brenner, who frequents such conventions with his son Michael, an FD patient and avid comic book reader, realized just how far a touch of humor could go for the community.

“Their disease is so rare, they feel so isolated,” Brenner explained. “We thought, wouldn’t it be nice if there was a comic that they could relate to?” The concept was simple. Brenner would tell bite-sized stories from the patient’s perspective and, in turn, he hoped that the comics would allow patients to see themselves portrayed in a more positive light. 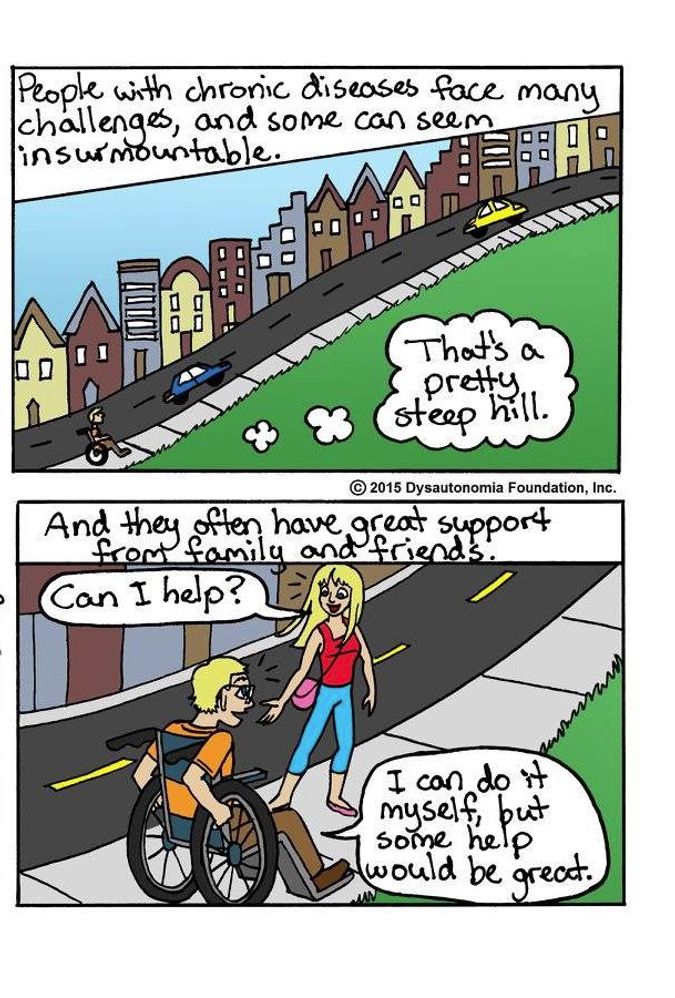 “When people see themselves or that disease in print it’s always frightening stuff,” he said. “It’s always talking about how severe this disease is, how challenging it is. They start to think about their own mortality.” There is currently no cure for FD — a neurogenetic disorder with a whole host of symptoms, including cardiac arrhythmias, lung infections, swallowing problems and a shortened lifespan. Out of an estimated 325 living cases in the world, 99% are Ashkenazi Jews.

Brenner was tasked with the unique mission of creating art that both recognized the severity of the disease and poked gentle fun at it. “There are some things that are comical and amusing about the disease,” he said. “The way people relate to sick people, when they’re a little bit awkward.” The response, he said, was overwhelmingly positive.

A quick look at Dysautonomia Foundation’s Facebook page shows an influx of comments from patients relating the comics to their own doctor appointments, interpersonal interactions and affirmations. And they’re not all FD patients. Brenner appears pleasantly surprised when he notes how far his comics have reached. “What we found was that our disease, which dealt with the problems people face with chronic and rare illnesses, was a much more universal topic,” he said. “People with all sorts of related illnesses began to like and look at our Facebook page.”

“At first coming up with ideas for the comic was really easy,” Brenner said. “Then it became a challenge. I really had to look closely at what people in the FD community were doing — what kind of problems, what kind of successes. And then I had to boil it down into three or four frames.”

When all else fails, he turns to his own family. “Sometimes my son sees himself in the comics,” Brenner says with a slow smile. “And then he wants a royalty.”

Thea Glassman is a Forward Summer Fellow. Contact her at [email protected].

Sketching Life With a Rare Disease