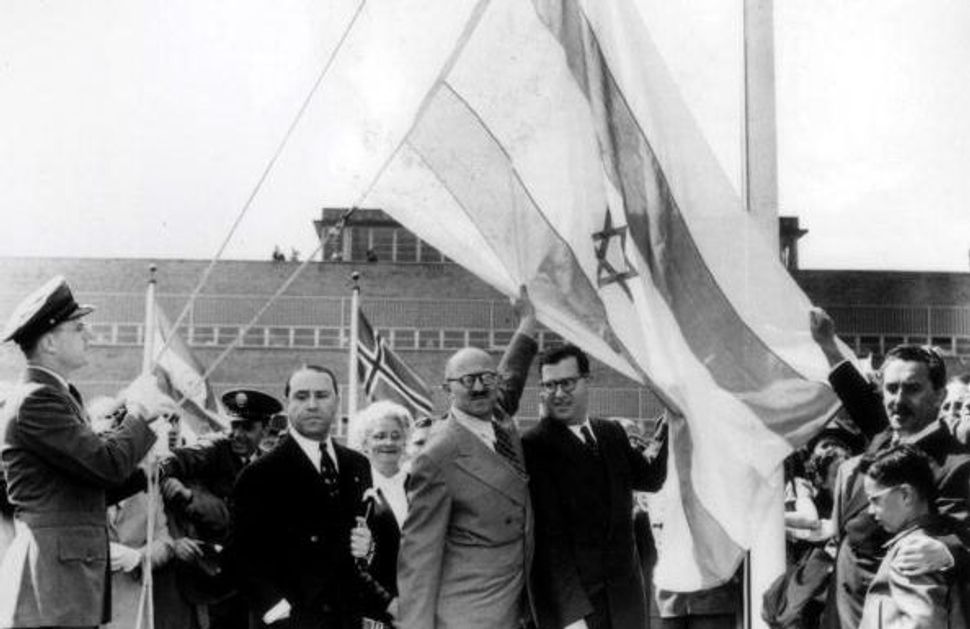 Most of the time we pay it little mind, but now and again it surfaces with a vengeance and takes center stage. At once artifact and symbol, decorative motif and rallying cry, it flutters in the wind, is waved up and down and is attended to with all manner of ceremony. I’m referring, of course, to that piece of cloth known as a flag.

As virtually everyone knows by now, the long-simmering contretemps over the Confederate flag recently came to a boil in South Carolina and was resolved by removing the flag from the public square. Those of us who closely followed the story came away with a renewed appreciation for the power of symbols.

Newly intrigued by the phenomenon of flag waving, I began to wonder whether there were any comparable moments within modern American Jewish history when the presence of a flag prompted a powerful emotional response, either in the form of a salute or in a show of defiance. Did anyone raise an eyebrow or make noise at a board meeting when the American flag was first hoisted in the synagogue sanctuary, a development some historians date to the Spanish-American War and still others to World War I? And what of the first Zionist flag, the familiar blue-and-white striped entity with the Jewish star in the center that we now recognize as the national flag of the State of Israel? When did it first make the rounds within American Jewish circles, and under what circumstances, favorable or confrontational?

On the positive side of the ledger, I’ve come across a reference to the sighting of a blue-and-white striped “Flag of Judah” at a Columbus Day Parade in Boston as early as 1892, several years in advance of the blue and white’s debut at the First Zionist Congress. Held aloft by the members of the B’nai Zion Educational Society, it was accompanied by an American flag as it made its way down the city’s thoroughfares. In the years that followed, the twinned presence of the Stars and Stripes and the Magen David became a familiar sight, a visual testament to what historian Jonathan Sarna has called the “cult of synthesis.” The two flags increasingly adorned synagogue sanctuaries across the country, where they stood tall on opposite ends of the pulpit. The red, white and blue and the blue and white also took pride of place on the face of bar mitzvah invitations of the interwar years, where they flanked the name, and sometimes even a photograph, of the bar mitzvah boy himself.

Not every American synagogue welcomed the Zionist and then later the Israeli national flag. As late as the mid-1950s, the official policy of the Central Conference of American Rabbis (CCAR) held that, in its capacity as the symbol of a foreign, sovereign state, the blue and white would be “quite out of place in an American synagogue.” Were an Israeli dignitary to visit, that would be another matter entirely; if that happened, flying the Israeli flag would be a mark of respect as well as an exercise in diplomacy. Otherwise, its presence was off-limits within Reform Jewish circles. That practice was overturned more than 20 years later, in the 1970s, when the CCAR, expanding the meaning of the Israel national flag, ruled that the latter could be — but by no means had to be — displayed in the synagogue sanctuary as a “symbol of Jews and Judaism throughout the world.”

And there the matter rested, at least until our own day, when, amid growing disapproval of the current Israeli government’s policies, some American Jews have made it known that the Israeli flag is no longer welcome in their precincts. How this will play out remains to be seen. 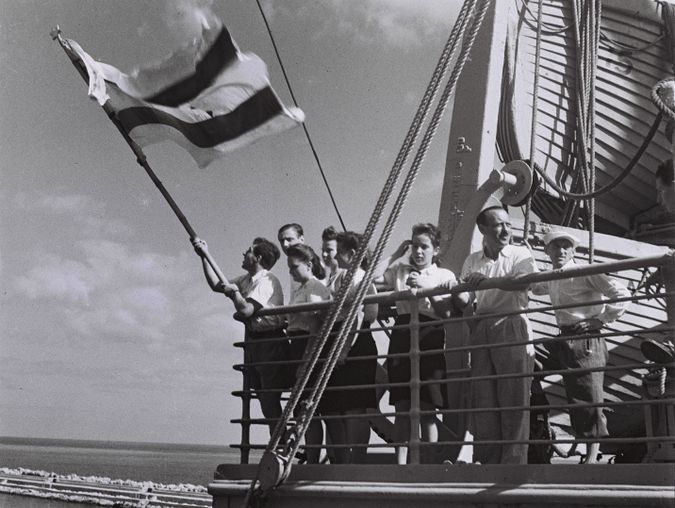 Long May They Wave: Jewish immigrants fly what would become the Israeli flag as they arrive in 1945 in Haifa. Image by Getty Images

In the meantime, there’s another bone of contention vis-à-vis the Jewish flag that’s worth noting: its origins. Who first came up with the idea of a blue-and-white striped symbol? And when? In the course of researching this column, I came across a fascinating public exchange within the pages of Jewish Social Studies of the 1940s between Alex Bein, who would go on to write what had long been the definitive biography of Theodor Herzl, and Dora Askowith, a member of the famously accomplished and actively Zionist Boston Jewish family, on the very “first Zionist flag.” Askowith, who taught history at Hunter College for 45 years, claimed that the earliest “prototype” had been the handiwork of her father, Jacob Baruch Askowith, who designed it in 1891. His flag hung proudly in Boston’s Zion Hall and was often “unfurled” at its annual Hanukkah celebrations. A year later, a slightly smaller version was made by two of Askowith’s sisters who, along with the other, all female members of the B’noth Zion Society, waved it publicly while on a parade organized by their brother, Elias Askowith. It, too, subsequently hung in Zion Hall.

Bein had a different creation story in mind. Determined to set the record straight, he claimed that David Wolffsohn, Herzl’s successor as president of the Zionist Congress, had been the first to come up with the idea of a blue-and-white flag. “One of the many problems with which I had to deal,” Wolffsohn wrote in his reminiscences, from which Bein quoted at length, “was that of deciding with which flag we should drape the hall. The question troubled me considerably. We would obviously have to create a flag, since we had none…. Suddenly, I got a brainwave: We already had a flag — the blue and white of the tallith…. We had but to unfurl it before the eyes of the Jewish people and the world at large!” Based on this text, Bein concluded, “Thus, it would appear that Wolffsohn arrived independently at the same idea as had inspired Miss Askowith’s father some five years previously.”

Does it matter who was on first, first? No, not really. But it makes for productive speculation about the relationship between flag waving and civic well-being.