What ‘Wet Hot American Summer’ and Jon Stewart Have in Common 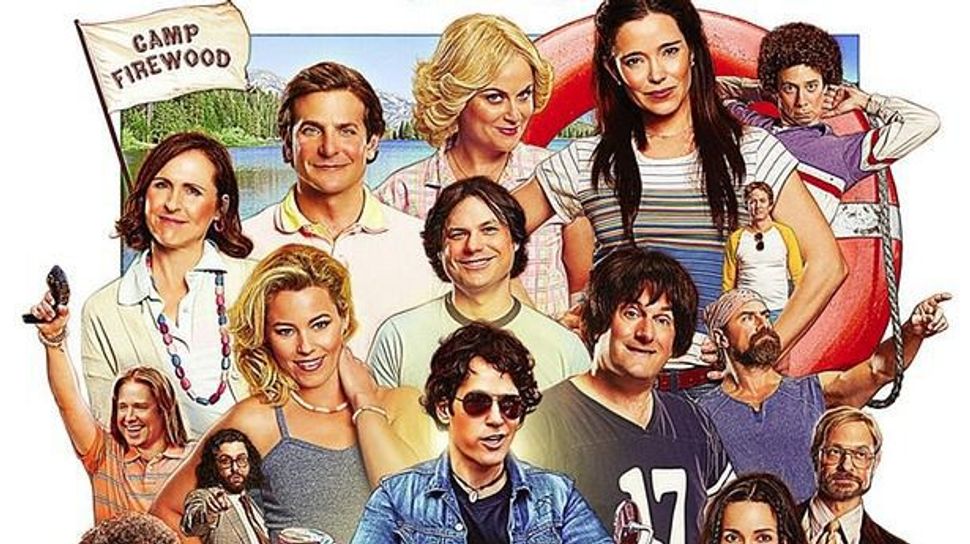 But that’s why it works so well!

Of course, the jokes are new, with gems like an incoherent “Starlight Express”-like musical, a token Israeli counselor who’s into threesomes and yurt-living, and a Reagan administration-led conspiracy to destroy Camp Firewood.

The prequel has retained, as I predicted, the original film’s requisite Jewishness. But the absurdity of Camp Firewood remains unwholesomely intact, giving a well-needed extra dose of silly nostalgia. And aside from some sloppy editing, which unfortunately leaves the first few episodes “badly listing” like a leaky ship, the sequel series shines. So, why do I find the series’ success at once triumphant and disturbing?

As usual, the culprit is context. This past week has been a doozy in Jewish comedy, with no shortage of welcome distractions from all that pesky ‘real work’ piling up on my desk. Besides the eight-episode “Wet Hot” resurrection, which I shamelessly devoured at an ungodly hour while my wife and dog slept, there’s also the hoopla surrounding another milestone of Jewish comedy: Jon Stewart’s exit from “The Daily Show.” Accompanying Stewart’s zai gezunt, is a steady barrage of clip-shows and articles to match. If you’re a hands-on procrastinator like me, you can even make your clip-show using “The Daily Show”’s very dangerous online clip archive, which (big shocker!) works much better than most serious research databases.

One is reborn as the other says l’hitraot. But, timing aside, these two shows have much more in common than you might think. They represent complementary aspects of Jewish humor. On the one hand, the silly-absurd realm of goofdom and, on the other, the semi-serious heart of Jewish comedy, guided by the principle which states that, as Saul Bellow wrote, “conquered people tend to be witty.” “Wet Hot,” of course, represents the first, Stewart the second.

Don’t get me wrong — both serve their purpose. But they do so in very different ways. “Wet Hot” works because it remains in stasis, suspended animation, a utopia (a non-place), where a certain idea of culture we hold onto stays young forever. These guys are stuck perpetually in a very well wrought 80s parody, this time adding pages from the Preppy Handbook. The Jewish humor is less politicized and more in tune with Seinfeld-esque minutiae of clothing, national stereotypes and broad mockery, all of which are hilariously, and unexpectedly bent in ways only David Wain could imagine.

“The Daily Show,” on the other hand, uses similar mockery to reveal unjust political maneuverings, oppression, diffusing its bite with absurdity of a similar spirit to that on display in “Wet Hot.” Both, I would argue, hearken back to a very specific mid-20th century yiddishkeit attitude; a time, as per the title of Alan Zweig’s 2013 documentary, “When Jews Were Funny.”

And they were funny! I mean, come on, this was when you had chubby bubbes and zaydes with thick Yiddish accents and even thicker glasses shaking their ample posteriors to cha-cha and mambo records, all while eating chopped liver until they went kerplot from arteriosclerosis. For an emblem of the age, look no further than cover art for Alan Sherman’s 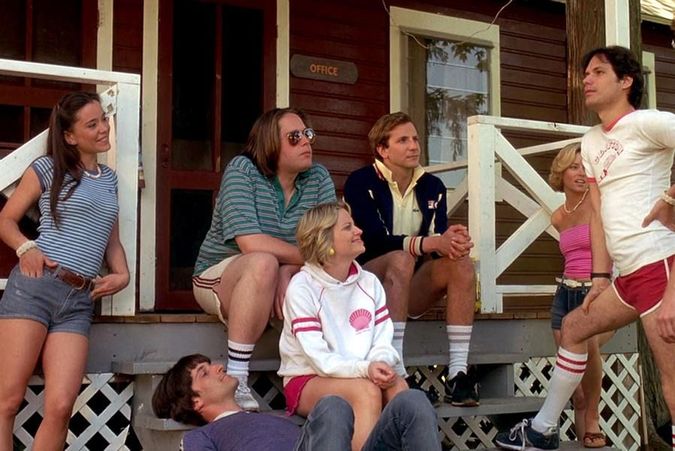 Wet Hot’s virtue this week is that it takes us back to this cherished place in time (which never existed) where this American Jewish ethos of the Borscht Belt seemed permanent. Stewart’s virtue is his ability to show the ethic lurking beneath the surface of all those oy-va-voy double-takes and eye-rolls; he has shown us that humor, self-deprecation, nebbishness and the like are all fronts for “telling it like it is.”

As a result, he uses the same basic tropes as those found in “Wet Hot” in order to trick us into looking at nuances instead of just accepting things as they are. He takes us to utopia and back to reality. He’ll be missed. But all is not lost! If anything, he’s taught us to look closer.

And, if we look a little closer at one of the last scenes in the new “Wet Hot,” we can find a unique, albeit tongue-in-cheek, revelation of a hidden, ethic behind the madness. In the final scene, an undercover reporter at Camp Firewood threatens to expose President Reagan (played brilliantly as a murderous jelly bean guzzler by Michael Showalter), and his attempt to destroy the camp, in a rock magazine. Reagan relents and turns back the army’s trucks. “I may be the most powerful person in the modern world,” he says, “but there’s one thing I’ve never been able to conquer. And that is freedom of press.”

With Stewart leaving, we shouldn’t mourn, but rather take a page from both him and the creators of “Wet Hot”; we should all do our part to expose, humorously and mercilessly, the absurdity currently threatening the sanity of our world.

What ‘Wet Hot American Summer’ and Jon Stewart Have in Common