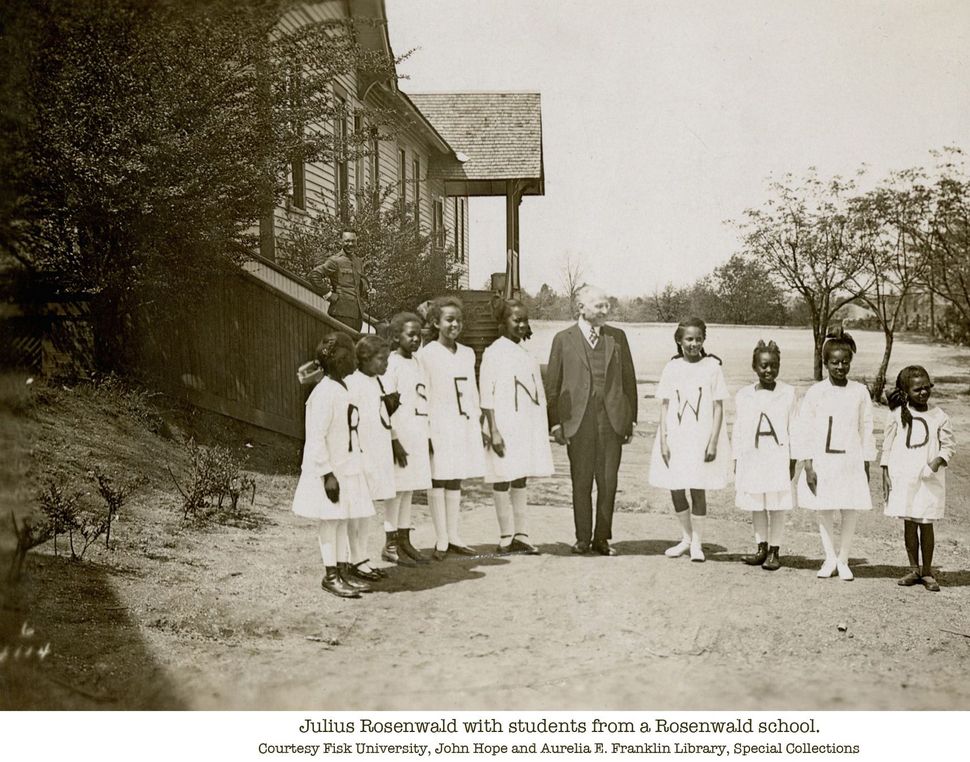 Image by Courtesy of Fisk University

“To me, Julius Rosenwald is the best antidote to Donald Trump,” says Aviva Kempner, who wrote, produced and directed the documentary “Rosenwald,” which opened in New York on August 14. “You see how pompous rich people can be, but Rosenwald is quite the contrary; he is one of the greatest examples for American Jews of tzedakah, tikkun olam, and repairing the world without fanfare — doing it just because he wants to make a difference.”

“Rosenwald” is a film about the longstanding camaraderie, shared struggles, and joint efforts of Jews and African Americans in the United States. And it comes out at a time when race relations and social inequities are very much at the forefront of American dialogue. Last month’s private premiere of the film at the Center for Jewish History in Manhattan took place on the same day that the South Carolina legislature took down the Confederate flag.

Kempner has made a career out of telling the tales of Jewish heroes such as Hank Greenberg and Molly Goldberg; in this latest documentary, she focuses on Julius Rosenwald, the Jewish businessman and philanthropist who, in the early 20th century, helped to make education accessible to blacks in the American South.

Kempner, a daughter of Holocaust survivors, grew up in tumultuous Detroit where years ago, during the war on poverty, her father was the head of a small business administration. “So I grew up hearing the story of, ‘We have to make a difference, we have to do things either through the government or through our own philanthropy to help peoples’ conditions,’” said Kempner. “The same need is even more so today.”

The film brings Rosenwald to life through animation, old film footage, typewritten letters and black-and-white photos, all accompanied by a soundtrack of piano, harmonica, gospel and blues music. Rosenwald, born in 1862 in Springfield, Illinois (also the birthplace of the NAACP), grew up across the street from Abraham Lincoln’s family home. He never made it to high school; instead, he went to work for his family’s clothing manufacturing business, which eventually became Sears, the Amazon of its day. After asking his friend Henry Goldman, of Goldman Sachs, for a loan to build a new Sears plant in 1906, Rosenwald saw his company go public, making Sears one of the first IPOs in American history.

He grew up to marry suffragette Augusta “Gussie” Nussbaum, and they both became true philanthropists, beginning as communal leaders in Jewish charities in Chicago, and then becoming involved in civil rights issues. Rosenwald was inspired in large part by African American writer and educator Booker T. Washington’s “Up From Slavery.” Washington’s writing and activism made clear to Rosenwald that there was a serious need for public schools in rural black communities.

“At one point, one out of every three African American schoolchildren in the South were attending a Rosenwald school,” Tanya Bowers, director for diversity at the National Trust for Historic Preservation, says in the documentary. Many of these schoolchildren had never even seen a Jewish person before.

Rosenwald’s schools were at once simple and iconic: The look, feel and architecture of the schoolhouses were standardized. The high-ceilinged rooms were filled with light, and on the walls were photos of Abraham Lincoln, Booker T. Washington and, eventually, of Rosenwald himself.

“A child who had gotten A’s would be marched from one church to the other,” Maya Angelou, who died in 2014, says in the film. “People took such pride in the children.”

Angelou, a prominent voice throughout the documentary, also draws parallels between the Jewish and African-American experience, describing how the Russian pogroms in the shtetls of Eastern Europe created an environment of fear for Jews that was jarringly similar to the way in which the Ku Klux Klan intimidated black communities in the States. (The Rosenwald schools, for one, did not escape arson and other hate crimes.)

“The history between blacks and Jews is just like Rosenwald said: What happened to us in Eastern Europe during the pogroms is happening to the blacks,” Kempner told the Forward. “I hope that people walk out of the film proud of that strong connection, and I hope we keep feeling those connections. I hope they get motivated to do something, whether in education or elsewhere. My goal in making films is first to entertain, then to educate, and then to motivate people into action.”

When Kempner began making “Rosenwald” 12 years ago, there was no way to anticipate that it would come out at a time when the issues of Black Lives Matter would be so prominent. “After police brutality cases, after the horrendous story in Charleston,” she says, “I’m proud that the story of this partnership between blacks and Jews is part of the history of trying to counter the horrendous affects of Jim Crow.”

“We can all be little Julius Rosenwalds,” she added. “You don’t have to be very, very wealthy to do the kinds of things he did.”

“Rosenwald” opens in New York at the Landmark Sunshine Cinema on August 14. For screen times and dates in other cities, check rosenwaldfilm.org