He’s Saying Hashem, But It Sounds Like Hare Krishna 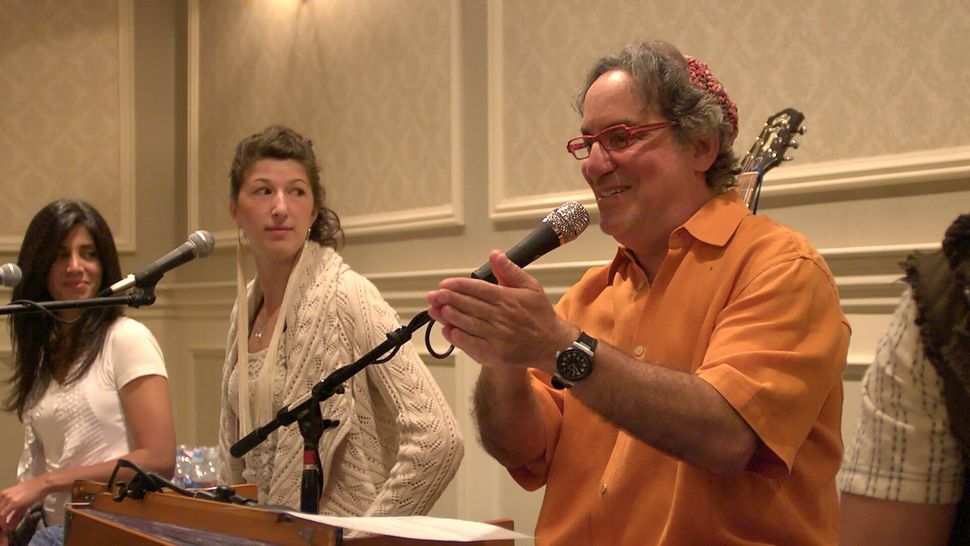 Image by Courtesy of Andrew Hahn

Picture this: a rabbi who is also a martial artist leads a style of ancient Indian chanting in Hebrew. A knit yarmulke rests upon his flowing gray hair, and during Jewish mystical chants, he plays a harmonium — which looks like a cross between a keyboard and accordion — or sometimes just his guitar. He sits on a pillow behind a microphone, stationed center in a row of backup musicians, chanting along or beating drums. Sometimes the music is mellow and arresting, other times ecstatic. His name is Andrew Hahn, but since around 2006, he’s officially gone by Kirtan Rabbi.

Kirtan is Sanskrit for “praise” or “eulogy.” It’s a form of call-and-response chanting whereby Hindus, Sikhs and some Buddhist sects call out the names of different deities. Think “Hare Krishna, Hare Rama, Rama Rama, Hare Hare.” By repeating mantras again and again, kirtan practitioners enter a meditative state. For devout Hindus, Sikhs or Buddhists, it’s religious, but even for those unaffiliated with such groups, the kirtan can have a spiritual dimension

Hahn, 57, isn’t the first Jew to lead kirtan. Krishna Das, born Jeffrey Kagel, from Long Island, is among the most prominent of American kirtan artists. Since traveling to India in 1970, Krishna Das has released 13 kirtan albums, integrating Western elements with ancient Hindu chanting. Other Jewish kirtan artists include Jai Uttal and the late Shyamdas. As spiritual leader Ram Dass, born a Jewish Richard Alpert, puts it, many in the kirtan scene are “Jewish on their parents’ side.”

But Hahn is different. His kirtan is Jewish all around. He uses Hebrew instead of Sanskrit to call out the names not of Krishna, Rama or Sita, but of Hashem. Rabbi Hahn, sometimes called Reb Drew, integrates foreign tradition into Jewish practice. Even Krishna Das once told the New York Times that kirtan doesn’t require an allegiance to any deity or religion.

In Hahn’s Manhattan office — with its cluttered desk and fully stocked bookshelves, nestled within the Clal headquarters, an organization for Jewish learning and leadership — he describes growing up as a “classical Reform Jew” in Pittsburgh. Like many of those in the post-World War II generation, Hahn says that his experience in Jewish practice and services “left us something to desire. Many of us went different ways.” He dropped out of Hebrew school and went on to study guitar, as well as philosophy, literature and languages. He eventually ended up in Germany, where he says his Jewish heritage began to feel more meaningful.

After receiving his doctorate in Jewish thought from the Jewish Theological Seminary and his rabbinic ordination from the Hebrew Union College-Jewish Institute of Religion, Hahn studied under Rabbi Zalman Schachter-Shalomi, the founder of the Jewish Renewal Movement, in Colorado. And that’s where some friends re-introduced Hahn to kirtan music made by Westerners, which he had only vaguely heard about back in New York.

“I was sort of a yeshiva bocher,” says Hahn. Initially upon hearing the recordings, he thought to himself, “Why are we listening to this music? We’re Jewish people.” But on a rainy day in his Boulder apartment, Hahn listened to Krishna Das’s “Breath of the Heart” album. “I put it on, and it just made me happy,” he says, and immediately thought it would work well with Hebrew. “I wasn’t setting out to start a new kind of prayer,” says Hahn, “I wasn’t setting out to be the Kirtan Rabbi.”

Around the same time Hahn began playing around with Hindu-style chanting to “kirtanize” the songs he knew from shul, he also began teaching tai chi, “mixing and matching meditation,” he says. Hahn developed a movement meditation program he called “Tai Chi Kavannah: a Bodyfulness Meditation” (“kavannah” means “intention” or “the heart’s direction” in Hebrew), aimed at helping Jews to think and pray with their whole being.

“My tai chi and my Daoist meditation practice are the essence of everything I’m doing in kirtan,” says Hahn. “I really think it’s important that the person [leading kirtan or meditation] has a personal practice.”

Hahn’s foray into meditational practices eventually led him to the Integral Yoga Institute in downtown Manhattan. For three years, he led Hebrew kirtan once a month at the yoga studio, and later at festivals, like Bhakti Fest, across the country. “It gave me a lot of nachas,” says Hahn, “to be at a yoga festival on the West Coast, and [Jewish] people come up to me and say, ‘This is the first time in 30 years that I feel connected to this tradition.’”

Hahn fell into what he calls a “two track program.” While performing in the yoga scene, he also led kirtans at shuls. These events brought in large crowds, half of whom weren’t even regulars, Hahn recalls.

“On the one hand, I work within my tradition in the Jewish world,” says Hahn, “trying to bring in some of the energy, what I’ve learned from Indian practice and technology of kirtan.” But in the yoga world, chanting in Hebrew, as opposed to Sanskrit, is less obvious. Many in the yoga community are non-practicing Jews who find spirituality elsewhere — such as Hindu or Buddhist philosophy — and are sometimes reluctant to dip back into Jewish tradition. Others who were more religiously conservative accused Hahn of trying to change Judaism or to turn Jews into Hindus.

But Hahn says Hebrew kirtan only adds yet another spiritual component to Judaism. Hahn compares kirtan to “ecstatic Kabbalah”: “You get a kind of release into God and letting go of yourself and getting out of your head. Kirtan makes meditation easy.”

Hahn says recently he’s been thinking a lot about Jewish meditation, musing over the commonalities between Jewish and Eastern practices. He calls the world a “global village,” where we have access to the teachings of other traditions. “It’s a smorgasbord to choose from.” That’s why if Jews don’t find what they’re looking for in Judaism, they go elsewhere. “Having access to other traditions forces us to innovate.”

“We speak sometimes of Hin-Jews or Bu-Jews,” says Hahn, “but we live in a time where everyone is hyphenated unless you’re really isolated. We’ve always been hyphenated Jews. We sing Adon Olam to a Prussian marching tune.” Hebrew kirtan is another product of the integration of outside influences into Judaism.

Hahn’s kirtans are cross-generational, attracting both millennials and baby boomers, who even bring their kids. His first album “Kirtan Rabbi Live!” was recorded at one such kirtan. But his other two albums, “Achat Sha’alti (one thing I seek)” — recorded in the studio, with liturgical undertones — and “Nondual,” which came out this past December, are each very distinct from one another.

Hahn likes helping people connect with Judaism in a way they haven’t before. He’s even coming to see kirtan as a new kind of Jewish prayer, but doesn’t intend it to replace traditional Jewish practices. “My work is to make this practice absorbable,” he says. “It’s great to go somewhere where everyone just loves what you do, for example at a Jewish renewal retreat, there’s no question. My real work is to go places where they’re suspicious and careful, both in the yoga world and the Jewish world.”

He’s Saying Hashem, But It Sounds Like Hare Krishna