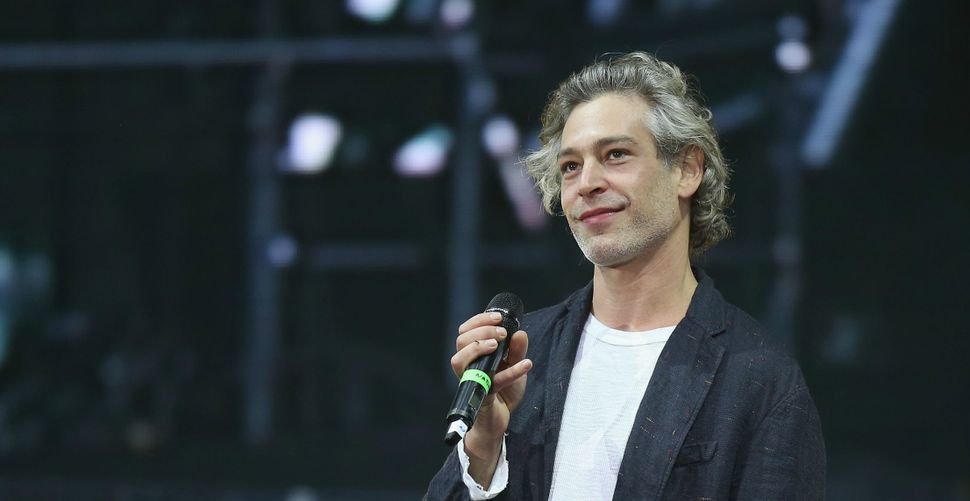 (JTA) — A Spanish music festival’s recent decision to rescind its invitation to the American reggae singer Matisyahu, after he declined to endorse a Palestinian state, brought international attention to a phenomenon that many European Jews have been feeling for years: that they are being targeted for Israel’s actions.

Matisyahu, who is Jewish but not Israeli, was the only performer to be asked his views of Palestinian statehood by organizers of the Rototom Sunsplash festival near Barcelona from Aug. 15 to 22. The cancellation of his gig triggered a wave of condemnations, including by Spain’s government and the European Jewish Congress.

To quell the storm, organizers of the festival reinvited Matisyahu — over the weekend he performed his hit song “Jerusalem” there — and apologized for what they said was a “mistake” made under pressure and threats from anti-Israel activists.

But some who track anti-Semitic sentiments and incidents in Europe see the Matisyahu affair as emblematic of widespread conflation between Jew and Israeli on a continent where Israel serves as a pretext for anti-Jewish acts.

Recent examples of the conflation include Hitler salutes by Belgian soccer fans at a match last month in Charleroi between a local team and Beitar Jerusalem; Bosnian soccer fans in April chanting anti-Semitic slogans, including “kill the Jews,” at an impromptu pro-Palestinian rally they held in Vienna; and in Britain, singer-songwriter Alison Chabloz signing a blog post this month in which she questioned the existence of the gas chambers with the phrase “#FreePalestine.”

“The borderline of what is acceptable behavior toward Jews is shifting in Europe, and the people moving it are using Israel as one of their main vehicles,” said Manfred Gerstenfeld, an Israeli scholar whose work has focused on European anti-Semitism.

Earlier this year Jonathan Sacks, Britain’s former chief rabbi, said European Jews are facing a choice: “Live in Europe and criticize Israel or be silent — or leave Europe.” He pointed a finger at the Boycott, Divestment and Sanctions movement, which aims to put political and economic pressure on Israel.

For its part, the BDS movement has been adamant in rejecting accusations that it is the modern face of anti-Semitism. It was, however, a pro-BDS group in Valencia, Spain, that lobbied for and celebrated Matisyahu’s ejection from the festival.

One of the movement’s most outspoken advocates, Ali Abuminah, who co-founded the website Electronic Intifada, defended rescinding Matisyahu’s invitation, insisting it was connected to his support for Israel and his performance at an event sponsored by the American Israel Public Affairs Committee.

Across Europe, BDS activists have consistently pressured festival organizers, performers and commercial entities to disassociate themselves from Israel and its supporters. Activists send petitions, hold protest rallies at events featuring those who back, or choose to visit, the Jewish state.

However, an inspection of the Rototom lineup reveals that non-Jewish performers whose actions were contrary to the BDS movement’s goal of isolating Israel were subjected to less scrutiny. The Jamaican singer Popcaan, for example, performed at Rototom a little over a month after giving his first concert in Israel. Malaka Youth, also a reggae band, played in Israel last year. And one of the festival’s biggest draws, Barrington Levy, an Afro-Caribbean singer from Jamaica, has performed twice in Israel.

To its critics, the alleged discrimination against Matisyahu was a way of making Europe an uncomfortable place to be Jewish.

Outside the music industry, the conflation of Jew and Israel last year engendered mob violence and exclusion that had not been seen in Western Europe since World War II. (The current wave of violence against Jews there began in 2000, coinciding with the second Palestinian uprising, and has worsened in recent years, particularly in the wake of Israel’s war last summer in Gaza.)

In Belgium last year, a physician refused to treat a 90-year-old woman with a broken rib because of her Jewish-sounding last name, telling her son, “Send her to Gaza for a few hours, then she’ll get rid of the pain.”

Also last summer in Belgium, the owner of a clothing shop in Antwerp refused to service a local Jew “in protest” of Israel’s actions during its most recent war in Gaza. Meanwhile, a cafe in Liege displayed a sign that read “no Jews allowed” in Turkish, and a French version swapped “Jews” for “Zionists.”

In France, meanwhile, authorities imposed a ban on anti-Israel demonstrations after several rallies deteriorated into attacks on synagogues. At least nine Jewish houses of worship in France were attacked during the war in Gaza. (A record 7,000 Jews left France, Europe’s largest Jewish community, for Israel last year.) And in the Netherlands, the home of Dutch Chief Rabbi Binyomin Jacobs was vandalized for the fifth time in recent years.

European governments and leaders are often accused of looking the other way to avoid rocking the boat or alienating large Muslim voting blocs. The lawmaker set to head Britain’s Labor Party, Jeremy Corbyn, has endorsed the militant Islamic groups Hamas and Hezbollah, as well as Dyab Abou Jahjah, founder of the Arab European League, which has published caricatures of Anne Frank in bed with Adolf Hitler and Holocaust denials on its website.

In the Netherlands, the withholding of the publication of a government-commissioned study on anti-Semitism among Muslims, who were found to be more susceptible to the prejudice against Jews than others, has provoked outrage from Jewish groups and others, notably rightist parties.

Some politicians, however, are confronting the problem head on, including French Prime Minister Manuel Valls, who has said repeatedly that “anti-Zionism is the portal that leads to anti-Semitism.” France is also the only country in Europe where BDS has been outlawed, by a 2003 amendment introduced by a Jewish lawmaker.

But the actions of those trying to curb the new anti-Semitism are still a negligible force, according to Gerstenfeld, a former chair of the Jerusalem Center for Public Affairs.

The views in some Arab and Muslim immigrant communities in Western Europe, among whom studies show that anti-Semitism is more prevalent than in the general population, “is emboldening ethnic Europeans to give expression to the age-old anti-Semitism in their culture, which for a time became taboo after the Holocaust as a result of guilt,” Gerstenfeld said.

“But now,” he said, “the two forms of anti-Semitism, the old and the new, are feeding each other as they push the borderline of acceptability toward a zone of discomfort.”