The Mizrahi Thorn in the Side of Israeli Left 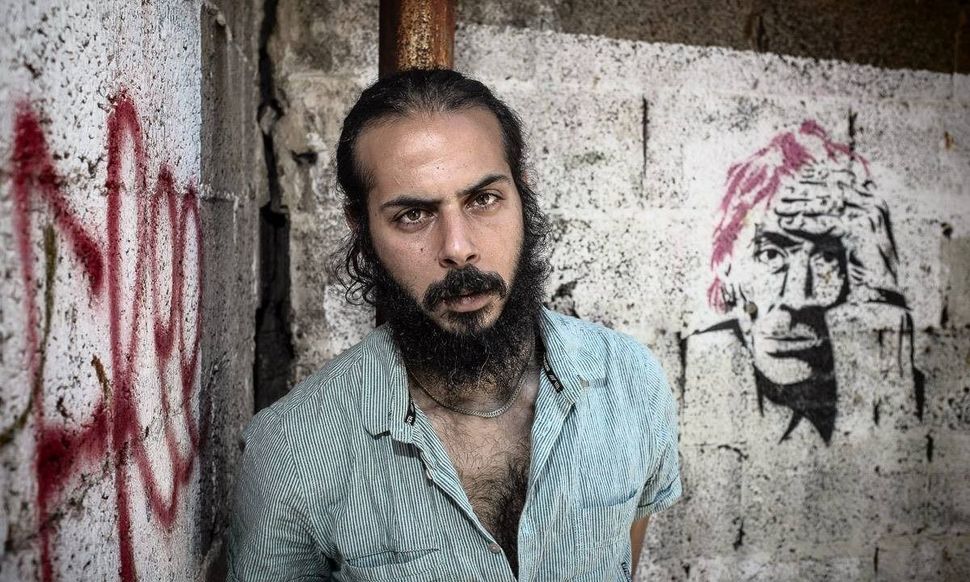 Roy Hasan has been described as the Israeli Eminem. The subversive, indignant, radical 32-year-old Mizrahi poet from a housing project outside Haifa received the prestigious Bernstein Prize and an award of 50,000 NIS from the Israeli Publishers Association this past July.

His provocative poem “If There’ll Be Peace, All the Arsim Will Come” sheds light on the complex dynamic in Israel between the white Jewish left and Mizrahim, Jews of Middle Eastern descent. The poem calls out Ashkenazim — Jews of European origins — for “hypocrisy, hegemony, and all around ass-hole-itude,” as it has been described by the radio station TLV1.

“In order to fully understand [the poem] you need to have grown up here or live the reality of Israeli society,” Hasan told me in an email exchange.

The poem focuses on local, everyday Israel through Hasan’s point of view. He criticizes privileged “socialists” who participate in capitalism, and leftist atheists who scorn religious Judaism, but ostensibly respect Islam.

“I just love those / sensitive Jews who demonstrate against the Occupation / and go home to their / Arab house in Yaffo / which they call Yaffa / with a melancholy glance of / shared fate over hummus / at Abu something-or-other / licking their lips with every / wipe of the pita and / murmuring about ending the Occupation, / dreaming of two states for two nations / because—walla—/ (they fumble for the Arabic) / Occupation Occupation / (or nakba nakba): / next to them but not with them / they’re Arabs after all. / An Arab friend said about them once / that they’ll never make peace / because if there’ll be peace / all the arsim will come.”

Mizrahim, or “Arab Jews” as many call themselves, already comprise more than half the Israeli population. “Peace will mean that all the Arabs will come, and then the country will be full of arsim,” Hasan said, explaining the last stanza.

To understand the poem is to comprehend the meaning of “ars” (plural: “arsim”) and its fraught significance in Israeli society and politics. “Ars” is a widely known derogatory and racist term in Hebrew slang often used to describe young Mizrahim of low socioeconomic status. Derived from Arabic, “ars” originally meant “pimp,” “shepherd,” or “bad guy.” In English, it’s comparable to “thug.” The female counterpart is “frecha” (plural: “frechot”), a term borrowed from a Moroccan first name popular in the 1950s and ’60s.

“I would say there’s ‘arsophobia,’” said Henriette Dahan Kalev, a professor of politics and gender at Ben Gurion University. “Ars” is a politically loaded word, but now many Mizrahim are reclaiming it, she explained. “It’s like reclaiming the word ‘queer’ in English.”

Dahan said that creative protest like Hasan’s has always been on the margins of the main discourse in Israel, overshadowed by the Israeli-Palestinian conflict or inter-party politics in the Knesset.

“As someone who holds radical leftist views I am constantly facing an internal struggle,” said Hasan, “and I know that until a different kind of left is created here, one that understands the complexities and the ethnic Israeli-Arab diversity and can allow people from the bottom rungs of society to reach the top, I will never have a real political home.”

As Hasan’s translator Ron Makleff points out, his poem addresses the fact that the Ashkenazi left has continually failed to win a majority in the Knesset and bring about change.

But the poem also calls into question the place of Mizrahi identity in terms of the conflict itself, explained Makleff, a historian at UC Berkeley. With many Mizrahim willing to call themselves “Arab Jews,” he said, “the binary of national identities in the Israeli-Palestinian conflict becomes more complex.”

Especially for a non-Hebrew speaking audience, the poem bluntly broaches complexities that are crucial to understanding Israel today, said Makleff. While our grandparents’ generation brought the idea that “we are all just Israeli,” a few generations in, that idea is falling apart, he said.

“I think the poem’s importance is in its criticism of how the secular Ashkenazi left is simultaneously hypersensitive to Palestinian historical grievances against the Israeli state, but dismissive of the religious, cultural, and historical grievances of Mizrahi Jews against the Israeli state,” said Makleff. “The poem juxtaposes those two aspects of old-school Ashkenazi leftism in a way which, to me, reveals just how deeply implicated that Ashkenazi left is in creating an unequal, occupying, intolerant Israel.”

The key term in the poem is “my Arab friend,” Miriam Herschlag, an editor at The Times of Israel, told TLV1 radio. “The claim is that we are too Arab for you, we make you uncomfortable because the Arabs are your enemy.” But Hershlag, who compared Hasan to Eminem, found the poem “deliberately ugly.”

The expression of anger and frustration over social discrimination has taken various forms in the past several decades. For an American audience, Dahan suggested that Hasan’s poem may be reminiscent of racial tensions between between white and black — a fact of history in both the United States and Israel. While once violent, protest in Israel has become more articulate, said Dahan: In the ’70s it was the Black Panther movement, in the ’90s it was academic, while today it’s artistic. “Just think of R&B and rap music, they want to express their rage,” said Dahan. “This is what Hasan is doing.”

Ars Poetica is one such group that gives voice to young Mizrahi poets. The group has a reputation for producing politically charged work and challenging the status quo. “The New Elites,” a three-part documentary by Ron Cahlili, Adi Arbel and Ori Saly, is another creative work that questions why “arsim” and “frechot” describe Mizrahim instead of Ashkenazim, and looks at how the Mizrahi identity has evolved and recently gained more mainstream acceptance.

Hasan said his best friend since childhood is Ashkenazi. A few days after the poem was published, his friend’s father told Hasan, “I agree with everything but also admit that I do some of the things you mention in the poem.”

Even TLV1 radio presenter Noah Efron felt Hasan’s poem spoke directly to and about him. “As a political being, I want to figure out a way to find some common cause with Hasan and his people,” said Efron.

The poem was shared thousands of times on social media. Some people loved it, others hated it, said Hasan. “Personally I am very happy when my poems get an emotional reaction from the readers,” he told me. “As long as they cause some people to connect and feel touched or others to get angry and hate me, then I’m happy.”

The Mizrahi Thorn in the Side of Israeli Left