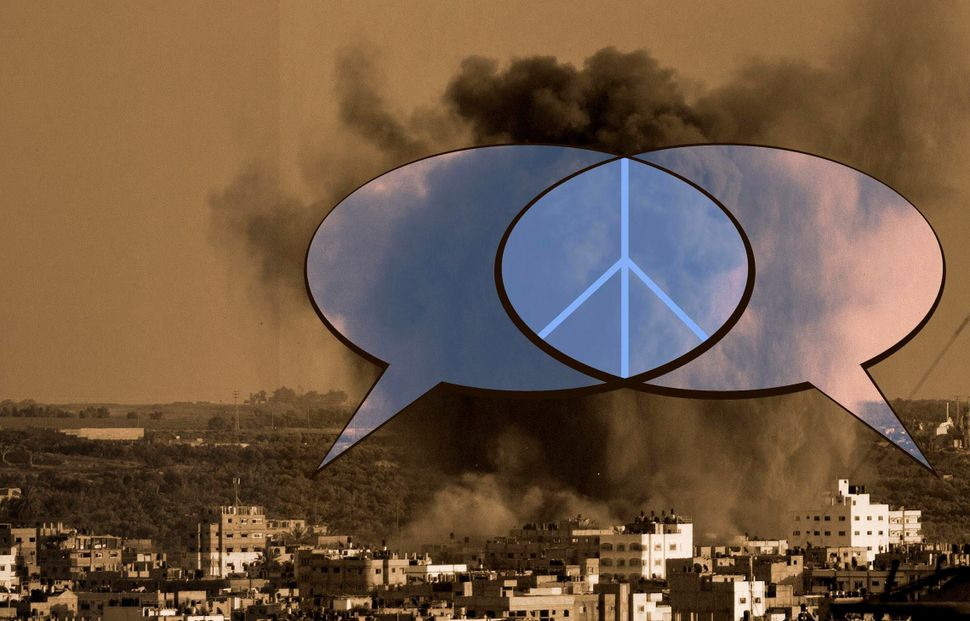 The last time I was in Israel was at the time of one more war in Gaza. People looked anxiously at the sky, scared of the falling debris of Hamas’s mortars. Those who lived closer to the border with Gaza took their deck chairs out to the hills and rooftops every evening. While drinking beer and eating snacks, they watched the rockets fall on Gaza and burn the houses. As if that was not enough, the newscasts added to the grimness by talking again and again about Iranian nukes that were going to fall on Israeli heads.

It was impossible to imagine that when I settled in Israel, in the ’70s, we went to Gaza to shop, and to Tehran for vacations. I also have a story about Tehran, but now I want to tell you about Gaza. The Gaza Strip was wonderful then, open and quite hospitable. Now it lies in ruins, but back then it was a lively and vibrant Mediterranean town that was just 13 miles from my home in Ashkelon, where I was then living. We went there to buy fruit and fish. We took our cars to be repaired there — it was a lot cheaper than in Israel. A Gazan dentist, Samir, took care of my teeth. Samir was a graduate of a Soviet medical school; we often chatted in Russian. We enjoyed bargaining on the souq, the Arab bazaar. From the fishermen’s boats we bought freshly caught yellow goatfish, striped red mullets and other small but tasty fish and fried them in oil on the spot.

Later, I returned to Gaza as a uniformed Israeli serviceman. I served in the military governor’s office there. One of my duties was to accompany buses with science teachers from the Muslim Brotherhood’s schools. We took them for advanced training at the Ben Gurion University in Be’er Sheva. Years later I saw many of the names of my students in the news among the Hamas fighters killed by the Israeli attacks.

In my free time I would take off my uniform and walk to the bazaar to sit in the cozy little café houses by the Mediterranean coast. Once, at the souq, I met Misha, a Jewish merchant, who came to Israel in the early ’70s from Czernowitz, Ukraine. Misha had a small cafe and consignment shop in Be’er Sheva, and he traveled often to Gaza, where he sold cured fish. He also had business there that was not completely legal.

Surprisingly, Misha didn’t understand a word of Arabic, and very little Hebrew. Misha’s mother tongue was Yiddish. At that time, many Palestinians spoke Yiddish. This is why, only with his mameloshn, Misha felt at home in Gaza.

In 1948, after the formation of the State of Israel, a large number of Palestinian refugees from Tel Aviv-Jaffa settled in the Gaza Strip. Many understood Yiddish; it was the main common language of trade and communication with their Jewish neighbors. In the first Hebrew city, the market spoke neither Hebrew, nor Arabic, nor even the Israeli broken pidgin Arabic that one can hear today on Rothschild Avenue in Tel Aviv. I went with Misha into cafés and shops, into restaurants and stores — and the locals all spoke to me in Yiddish. Many older Arabs back then knew Yiddish better than I do. Turns out that there were not dozens, but hundreds, maybe thousands of “Yiddishists” in Gaza.

Nobody in Israel had ever mentioned this to me. Later, I learned that many people knew, but didn’t like to talk about it. Such facts don’t fit into the common myths, for Israelis and Palestinians alike. I learned that some Gazans spoke in Yiddish to the Israeli soldiers when they entered after the victorious 1967 war. In those days many in the Israeli military still knew Yiddish, but the locals could not find a common language with them. The soldiers related this to the compilers of a seminal military history, but I heard that the editor decided not to include this story so as to not violate the myth that Yiddish had been left behind in the Diaspora.

In the mid-’80s, Gaza became a dangerous place. Hamas was created, and started its activity with the executions of drug dealers. They also killed a few Israeli dealers, who were disguised as greengrocers, traders and meat salesmen. However, Misha kept his businesses in Gaza — legal and otherwise — as if nothing had happened. One night, after a day of work, we were sitting at a table in front of his store by an empty market in Be’er Sheva. I asked him if he was afraid. Misha was never a talkative person and he did not like idle questions. So he stared at me.

“You know, I’ve lived through the Nazi occupation in Galicia,” he said, turning from a small brazier, where he grilled us kebabs for dinner. “I pretended to be a Ukrainian lumberjack. With my goyish appearance, you know, I could get away with it, but if I had opened my mouth and spoken, the Yiddish accent would immediately have betrayed me. So I pretended to be mute. Only a few locals, who were in the timber business with my father and grandfather, knew who I was. All of them spoke Yiddish. This was the common market language over there. Many Poles, Ukrainians, Gypsies, Ruthenians, Romanians, Swabs, Gutzuls and other folks knew Yiddish. I was sure then, as I am sure today, that the one who speaks Yiddish — he couldn’t be my enemy.”