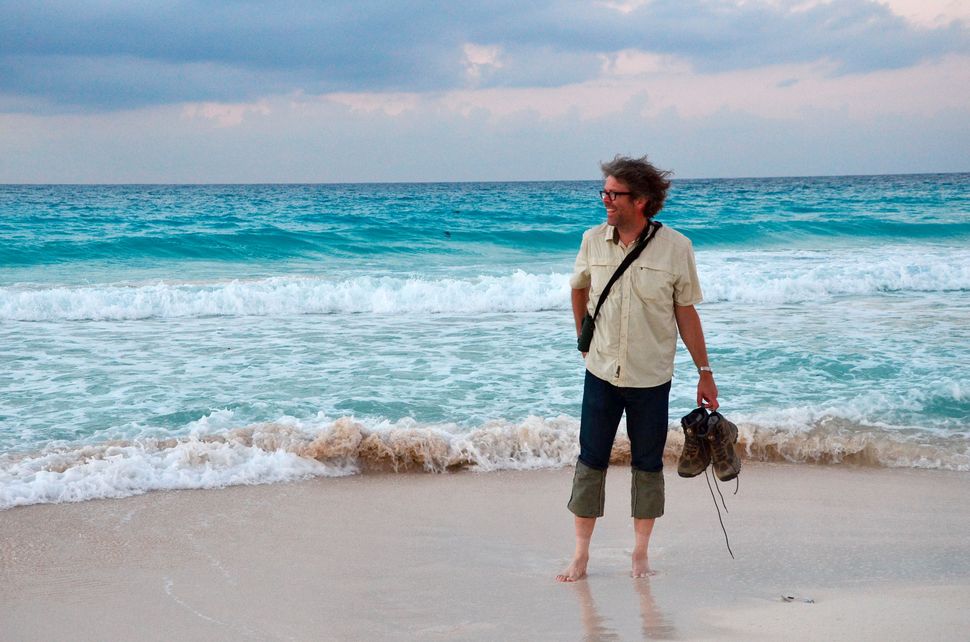 In 1969, after having written two earnestly serious novels that scrutinized the morality of his times in stately elegant prose, Philip Roth wrote “Portnoy’s Complaint.” A bawdy riff on sex and the impossibility of living up to the expectations of overbearing mothers, it reads like a repudiation of his previous work. By turns desperate and rageful, always hilarious, it scandalized Jews everywhere with its implication that imprisoned within every nice Jewish boy lurked a bad one who wanted more than anything to break out and publicly embarrass the tribe. One sensed that by inhabiting the character of Portnoy, Roth was liberating himself of the moral responsibility he’d previously attached to the act of writing fiction, setting free his work, if not himself.

On the evidence of his new novel, it appears that, like Portnoy, Jonathan Franzen, the most notable purveyor of “morally serious fiction” of his own generation, no longer wants to be a good boy. Though it’s called “Purity,” the book is primarily about defilement.

Superficially, “Purity” is another large social novel in the mode that Franzen perfected in his previous novels “The Corrections” and “Freedom.” The prose is transparent, plaintive in the way we’ve come to expect from contemporary realist fiction. The story covers great spans of time — entire lives — and leaps periodically around the globe. It’s massively long, and constructed as a series of interlocking novellas that bounce between a round-robin cast of characters, each of whom plays a crucial role in the lives of the others.

Thus we meet Purity “Pip” Tyler, an aimless millennial struggling to balance her protective love for her single mother with her desire to learn who her father is. Pip leads us to Andreas Wolf, an East German dissident who has reinvented himself as a Julian Assange-like cyber warrior hiding out in the jungles of Bolivia. Andreas, in turn, leads us to Tom Aberant, an ethically inviolate journalist who runs a start-up called Denver Independent, and to his Pulitzer Prize-winning girlfriend, Leila Helou.

We are presented with an array of topical motifs that lend a patina of currency and importance to the lives of these characters: student loan debt, Internet info leaks, the housing crisis, the embattlement of long-form investigative journalism, transnational corporations and global agri-business, and, most consistently and crucially, the gender debates that have been in ascendance recently among a certain left-leaning sector of the population.

What’s different this time is that Franzen’s heart doesn’t seem to be as invested as it once was in rendering the fabric of our social moment into believable fictional form. There’s something almost purposefully artificial about the reality he has created. Instead of allowing the depth of his characters to carry the story, he has constructed a rickety, convoluted plot involving Pip’s search for her father and the secrets she discovers along the way (an homage to “Great Expectations,” as Franzen explicitly points out at numerous points throughout the book). Whole scenes are dedicated to teasing out exposition through dialogue. At times the prose is bafflingly — and uncharacteristically — clunky, as though Franzen were only intermittently interested in controlling the tone and style of his sentences, or in flexing them toward social and emotional insight. The themes and symbols and literary gestures, though perfectly appropriate, expertly placed and exploited, are imposed on the story in ways that are opposed to how, in his earlier work, Franzen would have striven to naturalize them within a convincingly evoked realistic tapestry.

And yet, certain portions of “Purity” — especially the long section halfway through in which Tom attempts to sort through his guilt and resentment and love and hatred for his ex-wife, and also the passages evoking Andreas’s childhood in East Berlin, struggling for a way to separate himself from his emotionally omnivorous mother — contain the most powerful writing of Franzen’s career. In these pages there’s a violence of the soul, an anarchic anger and self-destroying pain, as well as a bottomless sadness. Though they don’t diagnose society’s foibles the way much of Franzen’s work does, they’re psychologically, emotionally, often sexually entrenched in a way that simultaneously attracts and repulses the reader, a way that feels ruefully, wretchedly true. They pulse with the stuff that great fiction is made of and constitute a brave, revealing exploration of the inner lives of their characters.

But also, they sit disjunctively with the rest of the book, in ways that lead the reader to wonder: What’s happened here?

It’s tempting to project Jonathan Franzen’s often flat-footed attempts to explain himself to the world onto one’s reading of his novels. The public drama of his self-doubt, his propensity for hand-wringing and for parsing his aesthetic intentions and worrying over their implications (in both the marketplace and the critical conversation), for making statements about both his life and our culture that expose uncanny overlaps between his preoccupations and those of his characters — these all lend themselves to a dangerous conflation of the man and the art. Noting, for instance, that large swaths of “Purity” consist of jeremiads against the Internet and the way it aims to “‘liberate’ humanity from the tasks — making things, learning things, remembering things — that had previously given meaning to life and thus had constituted life,” one can’t help but be reminded of Franzen’s periodic attempts, in interviews, essays and at least one commencement speech, to logically reason with a culture of trolls, flame wars, emoticons and (often knee-jerk Franzen-mocking) memes.

This urge must be resisted, of course, if one is to see the work clearly, but boy does Franzen make it difficult for the fair-minded reader to do so.

Recently he’s made a number of public statements along the lines of “The further you are into your career… the work gets ever harder and more desperate.”

One of the motifs Franzen returns to again and again in “Purity” is the concept of Moral Hazard, an economics term referring to what happens when monetary or power differentials are so great between two parties that one takes the risk while the other sees the gain (for example, too-big-to-fail banks handing out subprime mortgages). Is it possible that he’s become trapped in his own kind of Moral Hazard, wherein the expectation that he write social books about the important topics of the age is holding hostage the books he now feels most compelled to write? Is it possible that he feels guilty for yearning to betray the mission he laid out for himself 20 years ago in his Harper’s manifesto, “Perchance To Dream” — more fittingly retitled “Why Bother?” — in his first book of essays? That he feels the need to wrap his dark and violent, morally neutral story about male resentment and the psycho-sexual link between mothers and lovers in a big morally sanitizing book about the American tendency to strive for purity implies this may be so.

One wants to reach out to him and say: “Stop worrying about what the haters are going to say. Screw ’em.” They’re going to say those things anyway. Meanwhile, take a tip from Roth and liberate yourself from their expectations.