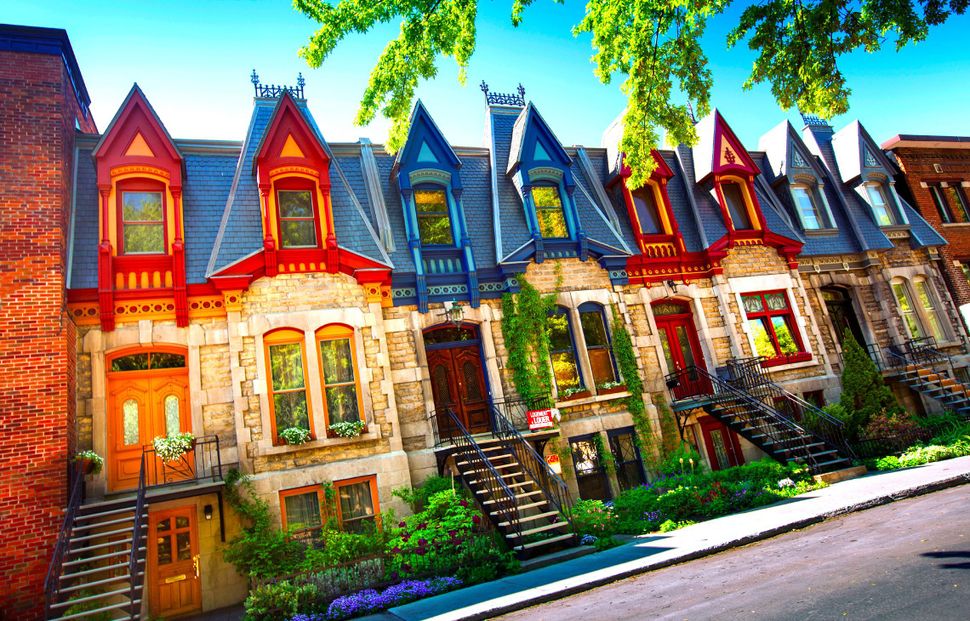 Before that momentous event, our paths had never crossed. (Full disclosure: since then, we have become attached at the hip — or the byline.)

I grew up in a secular, if proudly Sephardic, environment. My neighborhood, Notre-Dame-de-Grace, fondly known as NDG, is a mish-mash of all kinds of people: Jews, francophones, Jewish francophones, etc.

Sigal, on the other hand, grew up Orthodox in Cote-Saint-Luc, a Montreal suburb so insularly Jewish that it’s nicknamed Cote-Saint-Jew.

Her debut novel, “The Mystics of Mile End,” tells the story of a dysfunctional family’s dangerous obsession with Kabbalah and the Tree of Life. Set in the iconic Mile End neighborhood (think of a Williamsburg-like hipster-meets-Hasid situation) the story is told from multiple perspectives: 11-year-old boy Lev Meyer, his college student sister Samara, their father David, and finally, the neighborhood itself.

It’s a tale of Jewish Montreal — or at least, a Jewish Montreal. Not quite like mine, but instantly recognizable. And so, through the book, I rediscovered my native city and my community.

I sat down with Sigal to talk about her novel, our very different Jewish Montreal experiences and, of course, her bagel preference.

We both grew up Jewish in Montreal. My NDG upbringing was secular-ish. What was your experience like?

It was a bit weird and confusing in that I went to an Orthodox school but my upbringing wasn’t exactly Orthodox. At school I was expected to know the Torah and Talmud inside out, but as a girl I was also expected to stay away from Jewish mystical texts. Meanwhile, at home, I had a Kafka-and-Nietzsche-loving professor dad who happened to specialize in Kabbalah and saw nothing wrong with initiating me into that world. 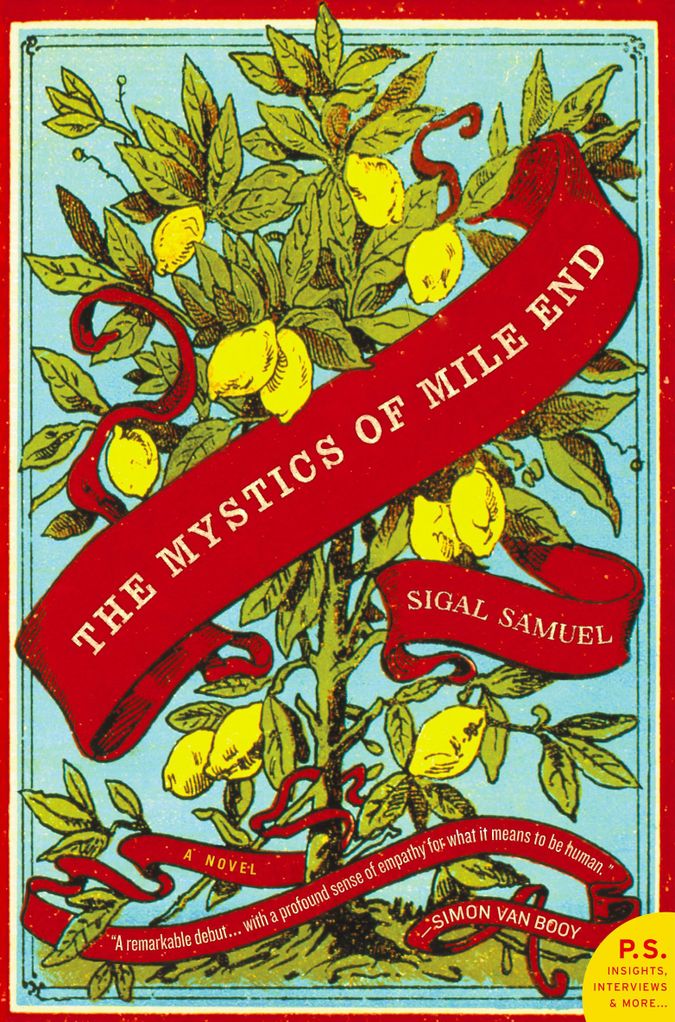 “The Mystics of Mile End” is set in the Mile End neighborhood, yet you grew up in Cote-Saint-Luc. How did you go about channeling the neighborhood?

My process wasn’t so much channeling as it was a kind of mild stalking. I spent a lot of time wandering around Mile End, sneaking into its various Hasidic yeshivas, chatting with Hasidic kids who seemed somewhat perplexed to be addressed by a young woman who, despite wearing jeans and a tank top, knew all of their Jewish lingo. It was not creepy, I swear.

Do you think you could have written this book without the access given to you by your upbringing?

No, on two levels. If I had not been raised Orthodox, I would have worried about exoticizing the Orthodox characters I was writing. As it was, I felt like I was writing about the world I come from and still have a lot of fondness for. I guess on a more literary level, I would never have been able to imbue this novel with so many allusions to Jewish texts — from the ancient to the very contemporary — if I didn’t come from that world.

As a Montrealer, you know I have to bring up language. Most of the characters are English-speaking, but you also wrote a French character. Why?

Even though there are plenty of anglophone Jews who manage to go through an entire lifetime in Montreal without meaningful interaction with francophones, I felt strongly that there should be a character whose first language is French. Every character in this book is in some way on the margins — theologically, linguistically or otherwise — so it makes sense that a character like David would be in a relationship with his French-speaking grad student Valerie.

Like me, you are Sephardic. But your characters aren’t — how come?

First, I think that’s interesting that that’s the assumption. When choosing the last name for the family, I was careful to choose a name that could just as easily be Sephardic. That said, many of the characters are clearly Ashkenazi and that’s because I grew up in a very Ashkenazi-dominated environment. It wasn’t until later that Cote-Saint-Luc became heavily Moroccan, and that, as part of my own personal development, I realized I was even allowed to write about Sephardic Jews.

Who is your favorite character?

My favorite character is Lev, who we first meet in the novel as a precocious 11-year-old boy. He’s winningly naïve in that way that some nerdy Jewish kids can be. But my favorite character to write was actually David. I think that’s because in my heart I am a 50-year-old curmudgeonly professor-man. 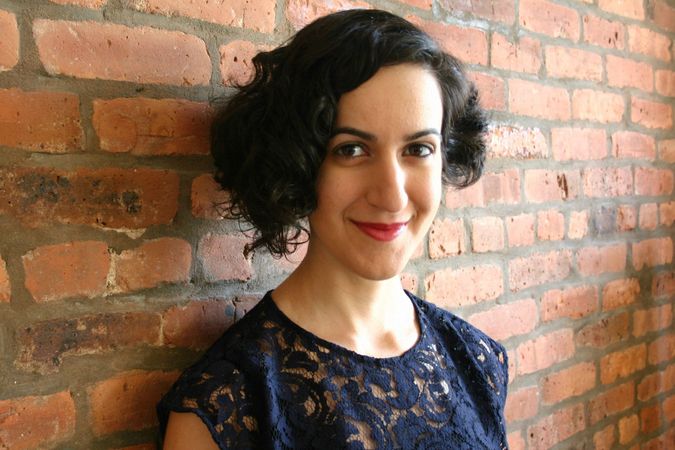 Do you see this as Jewish fiction, or fiction that happens to be Jewish?

One thing that surprised me — or, not really surprised me, but that I was glad to hear — when the book came out in Canada a few months ago, was that people found it “universal.” Readers coming from a Catholic background confessed that they were initially worried they wouldn’t relate to a novel about Jewish mysticism, but ended up finding it totally relatable. It makes me think of this Zadie Smith line that warns about trying to write some “universal neutral,” which is really usually just code for white, WASP-y culture. At first, a lot of writers think they have to aim for that, and I definitely did, but later I realized that the best or maybe only way to get to the universal is through the particular.

Does the novel reflect your own family story?

Weirdly enough, it does, but I didn’t find that out until I finished writing the book. At that point, I went back to Montreal to visit my grandmother, who is an Indian Jew, and she said, “It’s so funny that you wrote a book about Kabbalah.” And I said, “Why?” And she said, “Didn’t you know that your great-great-grandfather was a famous Kabbalist in Bombay?”

What are some of your inspirations?

In terms of Jewish literature, I’m influenced by everything from the Talmud, to S.Y. Agnon, to Nicole Krauss. I’m also weirdly influenced by bits of pop culture, like “Arrested Development,” which I’ve always thought is strangely Talmudic. It’s all about this endless series of callbacks and allusions. “The Mystics of Mile End” is full of that too. There’ll be a hint laid down on page 20 that you’ll only realize was a hint when you get to page 200 — that kind of thing.

What, no “Gilmore Girls”?

Well, you know that show has profoundly shaped my soul. So it must have found its way into the book somehow.

If Lev and Samara were to choose a favorite place in Montreal, what would it be?

Samara would probably end up at that Sunday dance-rave ritual on Mount Royal known as the Tam Tams, trying to whip herself into some sort of ecstatic frenzy. Lev would almost certainly be holed up in Cheskie’s bakery, stuffing chocolate rugelach after chocolate rugelach into his mouth.

He’d be hiding in the Birks reading room of McGill’s Religious Studies building. That library is like something out of “Beauty and the Beast.”

There was that one winter day that I spent walking up and down Hutchison street like a crazy person trying to figure out exactly which house the Meyer family would live in. I finally found the perfect one. I think my hands turned blue.

The Mystics of Mile End is out now with HarperCollins. The Brooklyn launch is at Park Slope Community Bookstore on October 15 at 7pm. The Upper West Side launch is at Book Culture on Columbus on October 19 at 7pm. Both events are free and open to the public. For more information, visit sigalsamuel