Yiddish Breathes New Life Into ‘Death of a Salesman’ 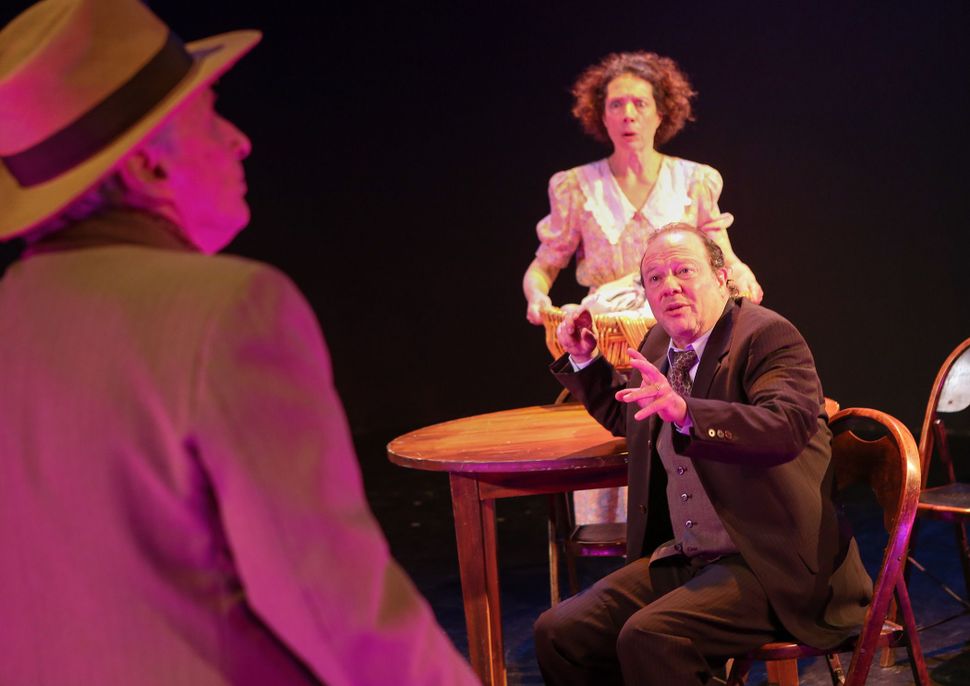 Is “Death of a Salesman” a Jewish play? Is Willy Loman, its main character, Jewish? The question has been asked almost since “Salesman” was first produced, in 1949. Loman’s precarious life was the fate of many Jews in the 20th century, and playwright Arthur Miller — whose centenary is being celebrated this month — was the son and grandson of Jewish immigrants. He even based the play on his own uncle, a boastful salesman who struggled to make a living. Yet there is no sign in the script that the Lomans are Jews. If Willy once had Jewish roots, they are long gone.

Now a new production of “Death of a Salesman” asks a further question. If Willy Loman was Jewish, did he speak Yiddish? The obvious answer, considering that the play was written and performed in English, is no. But it’s not that simple. Shortly after the premiere of “Salesman” on Broadway, a translation was made by the actor Joseph Buloff, who performed it with his wife, Luba Kadison, first in Argentina and then, with Miller’s blessing, at the Parkway Theatre in Brooklyn. Now that version, titled “Toyt fun a seylsman,” is being produced by the New Yiddish Rep under the direction of Moshe Yassur, starring Avi Hoffman as Willy. Perhaps, if you grant that Willy Loman really is a Jewish character, he would have been a Yiddish speaking one as well.

Like the New Yiddish Rep’s 2013 production of Samuel Beckett’s “Waiting for Godot,” the use of Yiddish raises new questions about the play, and offers new interpretative possibilities. Superficially there are many similarities between the two productions. Both are landmark pieces of 20th-century theater, and both have murky, albeit potentially Jewish contexts. Although Beckett’s play takes place in an existential void, the author’s participation in the French Resistance, and his writing of the play in the aftermath of the Second World War, gives its post-apocalyptic atmosphere a post-war resonance. Making its characters speak Yiddish only intensified that effect — Vladimir and Estragon are survivors of some sort, and in Shane Baker’s Yiddish translation they were certainly Jewish ones.

So too, although the characters in “Death of a Salesman” are thoroughly deracinated, critics have long identified them as Jews. Literary critic Leslie Fiedler called Willy Loman “crypto-Jewish” and in 2005, on the occasion of a revival of the play in London, David Mamet wrote that Loman is “unmistakably a Jew” and that the play “is a Jewish play.” As theater critic George Ross wrote in Commentary upon seeing the 1951 Yiddish production, “What one feels most strikingly is that this Yiddish play is really the original, and the Broadway production was merely Arthur Miller’s translation into English.” Yiddish, one imagines, would turn Willy Loman and his family from crypto-Jews into real Jews.

Yet strangely — almost absurdly — that isn’t the case. However one wants to parse Willy Loman’s imagined background, in the original version he is detached from any sort of ethnic community. As Miller himself put it in an essay published in honor of the play’s 50th anniversary, in 1999, if the Lomans are Jewish they are “light-years away from religion or a community that might have fostered Jewish identity.” To my mind, the Lomans could just as well be second or third generation descendants of Irish or Italian immigrants, or no immigrants at all. The important thing isn’t what identity they might once have had — it’s that by the time we get to know them, any remnant of it has vanished.

The Yiddish production, it turns out, does almost nothing to alleviate this absence. Indeed, unlike “Godot,” the use of Yiddish here doesn’t add much to the play. This isn’t to say that it isn’t an excellent production — it is. Although the cast is uniformly outstanding, attention must be paid to Hoffman as Willy, Suzanne Toren as his long-suffering wife Linda, and Daniel Kahn as his son Biff, with whom he has a stormy and tortured relationship. Although there have been many celebrated productions of “Salesman” over the decades, with actors from Dustin Hoffman to Philip Seymour Hoffman filling the lead role, it is hard to imagine more dynamic or moving performances.

Other aspects of the staging are equally impressive. Unlike the original two-tiered set, this production is stripped down so that the only furniture is a table and chairs. Yet thanks to innovative blocking, the minimal arrangement serves just as well as a more elaborate one might have. And while the lack of props might make a sometimes confusing play even more so — throughout the play Willy drifts in and out of fantasy, speaking to characters who appear on stage but whom only he can see — its status as a classic work of 20th-century American drama makes this a minor concern. But this production, excellent as it is, would have been just as good in English.

Or maybe not. The New Yiddish Rep, as with its production of “Godot,” has done more with “Toyt fun a seylsman” than just create a cultural curiosity. It has, even at this late date, expanded the boundaries of Yiddish itself. But rather than infusing “Salesman” with Jewishness, as Yiddish did for “Godot,” here the play takes the Jewishness out of Yiddish.

For most Yiddish enthusiasts, the language is inextricably bound up with the Jewish parts of our lives. This makes sense; Jewish life has a more intense quality to it in Yiddish than it does in English. But for most of us, this is only one aspect of our selves. The culture we live in is predominantly not Jewish, our friends include many non-Jews, and our jobs (the present case excluded) often have little to do with Judaism. No matter how much we embrace Yiddish, it is only a part of the whole.

Yet Yiddish aspired to be more than that. For the centuries in which it was the lingua franca of Ashkenazi Jews, Yiddish was the language of the street, the market and the home. Later, Yiddishists envisioned expanding its reach further, keeping pace with the modern world. It would be the language of the law firm and the doctor’s office, the restaurant and cafe, the concert hall and the theater, even the football field and boxing ring. It would be a language you could go to university in, and study anything at all.

That never happened, quite. Perhaps the closest it came was in the Soviet Union, where Communist policy separated Yiddish as a national language from its roots in Judaism — a tragic and misguided vision that ended in tears. And these days, no one is likely to revive that dream. But this production of “Death of a Salesman” gives us a glimpse of what such a Yiddish existence might have been like in America. Unlike most Yiddish cultural events, this play comes with almost none of the usual trappings. There are no mentions of the shtetl or references to the Holocaust; no folk songs or klezmer music, and certainly no religion. Consider how far Judaism remains from this play: when death strikes, no one says Kaddish. Even as Yiddish speakers, these characters are more assimilated than many of the most assimilated Jews today.

Which isn’t to say that the Yiddish-speaking world “Seylsman” depicts is entirely hypothetical. Like Miller’s original, it takes place in a recognizable time and place. In its depression-era period, there were Yiddish-speaking, Willy Loman-ish travelling salesman, who went up and down the East Coast selling to Jewish and non-Jewish clientele alike. The production further accentuates the historical moment with its use of English. From the title on down, the script makes liberal use of English words and even slips completely into English from time to time — a historically accurate representation of American Yiddish vernacular. Similarly, English draws ethnic lines between characters; in one of the most striking departures from Miller’s text, we hear Willy teaching his non-Jewish mistress how to thank him in Yiddish for stockings. The Lomans aren’t particularly Jewish, but Yiddish does make them a people apart.

Yet even if the world of “Seylsman” could have existed in some sliver of time, the play is clearly not meant to represent a realistic circumstance. True, the two Loman sons, Happy and Biff, throw a few more English phrases into their conversation than their parents do. But this degree of Yiddish-speaking continuity, where a second or third generation would speak among themselves primarily in Yiddish, was practically unheard of outside of committed Yiddishist families, which the Lomans certainly are not. Even the introduction of ethnicity in an otherwise de-ethnicized play doesn’t contradict its overall “everyman” tenor. The Lomans may belong to their own language group, but otherwise nothing distinguishes them from the rest of society.

“Toyt fun a seylsman” thus presents a kind of alternate history, where one could be an alienated, assimilated Jew, and still speak Yiddish. It’s a strange and unrealistic prospect, and witnessing it on stage is a weird experience. But it is also a refreshing one. This is Yiddish that just is, with no justifications, explanations or apologies. It’s a fascinating thought experiment — and also great theater.

Ezra Glinter is the deputy culture editor of the Forward. Contact him at [email protected] or on Twitter, @EzraG

Yiddish Breathes New Life Into ‘Death of a Salesman’