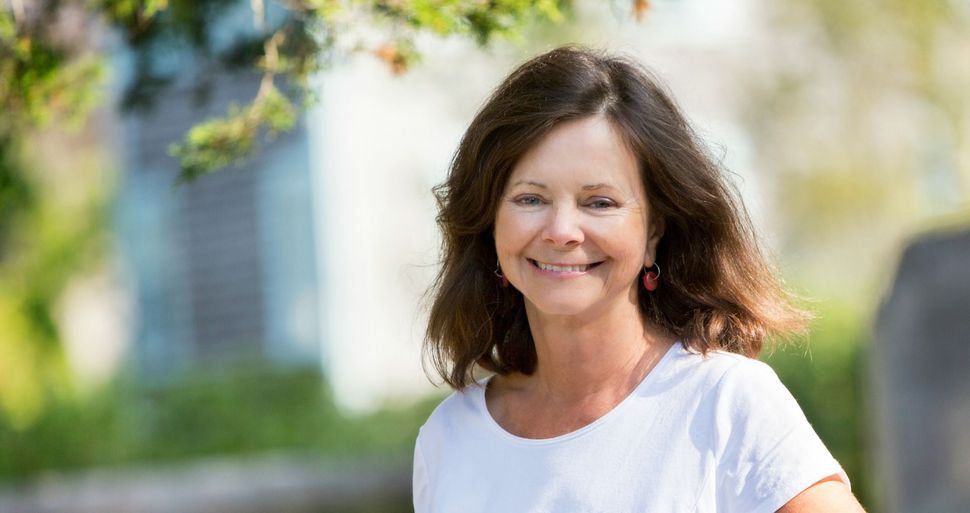 I first learned who Geraldine Brooks was when her 2005 novel “March” won the Pulitzer Prize for fiction. My mother had gone to journalism school with Brooks, and the novel was about the absent father in one of her favorite books, Louisa May Alcott’s “Little Women.” Those two connections were enough to make Brooks a household name in my family.

“March,” at risk of being characterized by its association with Alcott’s distinctly domestic novel, might have seemed like a strange book for Brooks to write. After graduating from Columbia Journalism School in 1983 she spent years covering political and military crises, especially in the Middle East. In fact, the novel drew on some of those experiences, following its protagonist through the Civil War.

Brooks’s new novel, “The Secret Chord,” also has been influenced by her work as a journalist. A chronicle of the life of the biblical King David, narrated by his prophet Natan, the novel takes a frank, sometimes gruesome, look at the militarism and statecraft that supported David’s long and storied reign. Its roots, however, are in a joyful place; Brooks writes in her acknowledgments that she was inspired to take on David’s story after her eldest son took up the harp at 9 and then, at his bar mitzvah, used it to perform Leonard Cohen’s “Hallelujah.”

Brooks and I met after she was about to come off a radio interview. It was a pleasure to meet her, after knowing her name for so long.

In the acknowledgments of the book, you write that your interest in this subject came from your son, who took up the harp and then played “Hallelujah” at his bar mitzvah. Can you tell me more about that?

I was just really surprised that he chose the harp, because you don’t think of small boys as being attracted to that particular instrument. I was expecting electric guitar or drums or something noisy. It turns out it’s a wonderful instrument to learn music, because you can’t make a bad sound on it, even if you’re playing it really badly, so you get a lot of positive feedback. When a 9-year-old was turning thirteen and he wanted to play something that related to the Jewish service, “Hallelujah” seemed like a great choice.

Does he still play?

Yes, he does. He’s 19 now, and he took it off to college with him. He actually played at my launch at Temple Israel in Boston the night before last. It was lovely, because when I was able to introduce him, everybody went “Aww,” so that was nice.

Do you have a favorite version of “Hallelujah,” aside from the one your son plays?

I love K.D. Lang, although she leaves out one of my favorite verses — “I remember when I moved in you, the Holy Ghost was moving too.” And I don’t think she sings the “[I’ll] stand before the lord of song,” so hers is not as complete, but she’s got such a rich voice. I think she was the first person I heard singing it.

Well, I think what’s so attractive about David is that he encompasses so much. Not many people have that extensive a skill set, that you can be a poet and a musician and a military tactician and a politician, so this is a pretty extraordinary combination of abilities in one man. And, you know, he is a very capacious character. Everything happens to him — every joy that you can imagine, every good experience, and then every bad experience, every miserable suffering that you can imagine, befalls him as well. So I don’t think it’s strange that he’s provided such inspiration to other artists through the years. I just did a search on all the visual art representations of him, and they’re so various, and so exquisite, from the Old Masters’ paintings to contemporary art.

Do you have a favorite?

Oh, I have so many favorite ones. There’s an Australian artist called Arthur Boyd who has done a series about David and Shaul, and they’re very tender paintings — abstract expressionist, I guess you would call them — and I think that it captures the pain of Shaul’s mental illness and the tenderness between the two of them. And the artist had a father who was mentally ill, so I think that he’s working on his own issues. Oh, I want to say one other artwork — I think Bernini’s “David” — is splendid, the action and the tension in his face at the moment of — of slinging. It’s really brilliant.

Your descriptions of David’s voice and the power of his music are so moving. Were there artists you listened to while you were writing who helped you imagine what the music might be like?

It’s very hard to imagine what early Hebrew music was like. We don’t even know if they had the same scales that we use, so not specifically. I use music a lot as I write, because I think that when you’re listening to beautifully organized music it is inspiring in terms of using your own tools in a musical way to create good sentences. But I can’t think of any particular David-related — there’s a really absolutely gorgeous opera aria for a countertenor by Handel, “O Brave Jonathan” — so beautiful.

Your background is in journalism and you’ve done a lot in that field. I’m curious about how you see your work as your journalist and your work as a novelist influencing each other.

I don’t think I could write the novels I write if I hadn’t had those years, particularly covering conflicts, and I would say especially in the Middle East for this book. Being in religious theocracies gives you a lot of insight, particularly into the position of women and how they have to navigate their lives in very precarious circumstances in societies where they’re not supposed to have much of a public role, and yet they have a lot of influence that is behind the scenes. I got to meet Ayatollah Khomeini’s widow, and I learned from getting to know her and getting to know the other women in his family that she had an enormous influence. A lot of the elite knew that, but most Iranians wouldn’t be able to tell you her name. Her name was Khadijeh, but it was never mentioned publicly. So it is this kind of complete private power versus public power. So, I’m drawing on my experience covering the lives of women in the Islamic Middle East. And then I also draw, unfortunately, on some battlefield experiences, because even though the weapons in the wars that I bore witness to were different weapons, the effect on the human body is much the same. And the first battlefield I ever saw was on the Faw Peninsula in Iraq, where the Iraqis had managed to win a few hundred yards of desert back from the Iranians. They took some journalists to look at the great victory and it was just this desert — really, really hot desert — strewn with teenagers’ bodies in various stages of decomposition. You never forget something like that.

Had you been to Israel before researching this book?

I was there for the first intifada, in ’87, and then pretty constantly for the next six or seven years as a correspondent. And then I went back with my 10-year-old son to do research for this novel.

Did being there with him give you any insight you might have missed otherwise?

Oh, totally. I like to take kids on research trips because they see things with un-jaded eyes, and they ask good questions, and things you might assume they don’t assume. In this case the most fun was when we were exploring the caves around EIn Gedi where David hid out from Shaul, and he would be running up these steep hillsides and I would be panting up after him, and I thought, “Yeah, I bet Shaul felt exactly like this with the fleet-footed youth always eluding him.”

This is the first book in which you’ve done work with anything biblical in origin. Was that scary to take on, or did it feel quite natural?

It was very seductive, actually, to have such a fantastic scaffolding to build an imaginative edifice on. But I didn’t realize what I was getting into, and I didn’t realize how I would have to completely reinvent a way of research. And a lot of it was experiential, like going and doing things like David might have done. Not the adultery and murder — but the sheepherding and, you know, the riding mules and being in the desert in the goatherd tent and eating the foods of the period and getting the smells and the sounds right. We had a long day’s ride on a camel, which was a sore ass for no good reason because then I found out they didn’t have camels.

Your novels tend to center on sort of a kernel from history, whether it’s David in this, or the Sarajevo Haggadah in “People of the Book,” or the first Native American to graduate from Harvard in “Caleb’s Crossing.” I’m curious about what draws you to the kernels that you find.

I love what Mark Twain said: Fiction must be plausible, truth needn’t be, so I’m always looking for these things that are true. If you made them up they wouldn’t be interesting.