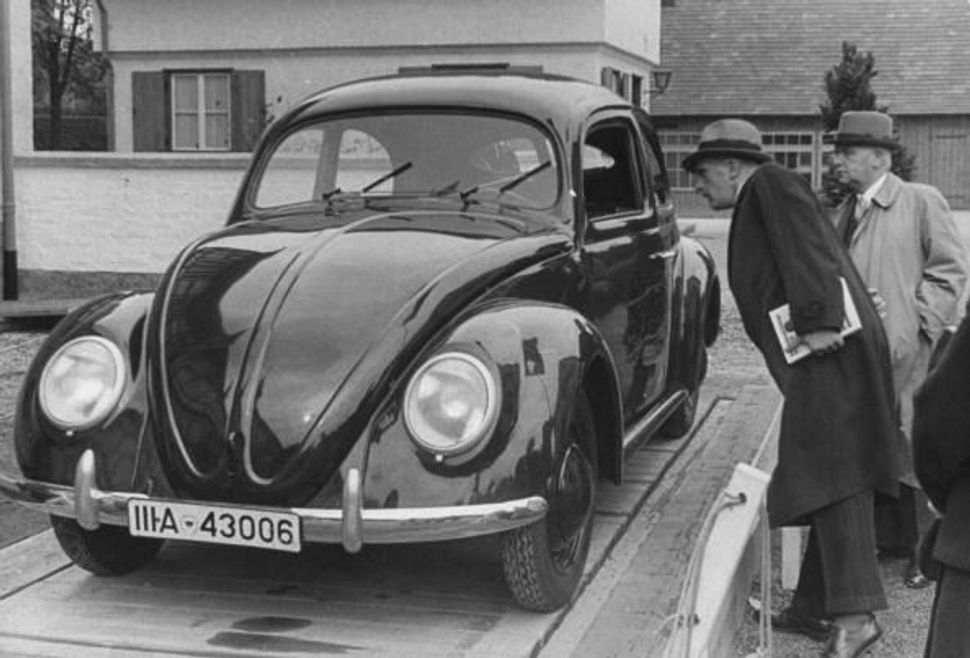 We Jews may be the elephants of religion — if not of politics. We have long, long memories (to wit, we are still fighting over Israel after thousands of years), though those memories may be attenuating through assimilation. I thought of that recently during the Volkswagen emissions scandal. I had never known a Jew who owned a Volkswagen, and for good reason: The Volkswagen was the Nazis’ car. And even though the war is 60 years past, and even though no one at Volkswagen AG today had anything to do with Adolf Hitler (crooks, yes; Nazis, no), I still can’t think of a Jewish friend of mine who would drive a Volkswagen. But when my younger daughter wanted a Volkswagen a few years back, this silent boycott never even crossed my mind. She got it, she drove it, and I can guarantee she never thought of death camps or slave labor conscripts.

In my family, when I was growing up, it was different. Everyone held grudges. If no Jew would buy a Volkswagen, I never knew a Jew who bought a Ford, either, certainly none of my parents’ friends or our relatives. My father was a Chrysler man — actually a Plymouth man, because he couldn’t afford a Chrysler — and when his stock rose he bought a Pontiac, and when it rose higher still, Buicks. We wouldn’t even visit a Ford showroom, and I didn’t have the slightest idea why, until I figured out that Henry Ford had been a vicious anti-Semite and we Jews weren’t going to give him business, even if he was long dead and his sins didn’t devolve onto his son. To be honest, I wouldn’t buy a Ford now, either, not because I harbor any animus toward the company, but because that old Jewish memory is so deep in my blood, I couldn’t extirpate it, even if I wanted to. See what I mean about elephants?

I never saw a Jew with tattoos, either, at least not when I was growing up. Or, to be perfectly accurate, I never saw a Jew with the kind of tats you see nowadays. I am sure that there is some religious proscription against them — something about not adorning one’s body to improve God’s handiwork or about avoiding vanity. But that’s not why, I think, Jews didn’t have tattoos. It is because of the tattoos we did see and what they ignited in our collective memories. I will never forget walking through Bloomingdale’s maybe 20 years ago and suddenly catching the tattoo on the wrist of a wizened little woman shopping there : the tattoo — those tiny blue-black numbers. To engrave one’s own body would only serve as a reminder of how the Nazis engraved our co-religionists, and I have a feeling that there is a new generation out there getting tattoos of butterflies and flowers and Chinese characters and semicolons and whatever, and their parents — my generation — are aghast and appalled, some of us possibly not even knowing why that instinct kicked in, or at least not knowing the deeper reason why, because it is a matter, again, of something close to blood memory. This clearly doesn’t afflict gentiles – or rock stars or skinheads or NBA players (non-Jewish ones).

In my house, growing up there were a whole lot of proscriptions, a whole lot of people and things consigned to what the gossip columnist Walter Winchell, a Jew, called a Drop Dead List: any of the Hearst Newspapers, because William Randolph Hearst was a Nazi apologist; Charles Lindbergh, ditto, Atlantic crossing or not; Welch’s grape products, because my parents mistakenly assumed that the company was affiliated in some way with John Birch Society leader Robert Welch; T.S. Eliot, even though I am quite sure neither one of my parents ever read a poem of his; Wagnerian operas; Richard Nixon, because he abetted Joseph McCarthy, and my parents were convinced that McCarthy was in cahoots with anti-Semites and that Roy Cohn was just his cover (and it turned out they were right about Nixon!); Black Muslims; Chanel perfume, because Chanel was a well-known anti-Semite (though, to be honest, my plebeian mother wouldn’t have worn Chanel if Coco had been an Orthodox Jew), and TV personality Arthur Godfrey, because he had once hosted a radio show at a Miami Beach hotel where Jews were restricted. When Godfrey peremptorily fired the young Italian singer Julius LaRosa, who had been a regular on his TV show, my parents acted as if LaRosa had been exiled by Hitler himself. To them, Godfrey’s presumed anti-Semitism made LaRosa, the outsider, an honorary Jew. And I grew up instinctively hating H.L. Mencken and Ezra Pound, even though back then I hadn’t the slightest idea who they were, only that they, apparently, weren’t too keen on Jews.

Of course, it worked the other way, too — not just vengeance for grievances, but also love for support. My parents spoke glowingly of Woodrow Wilson, who governed before they were born, because he appointed Brandeis to the Supreme Court. And Franklin D. Roosevelt — well, in my house he was sainted, not because he may have saved the country from the Depression or guided America through the war, but because he had so many Jews in his administration that anti-Semitic opponents derisively called him “Jewsevelt.” Even Adlai Stevenson was an object of genuflection, because he had the blessing of Eleanor Roosevelt, wife of the saint; because he was as bookish as a Jew, and because he, too, was surrounded by Jews. My parents kvelled over Stevenson so much that I grew up assuming he was Jewish.

I knew that my family wasn’t alone in expressing these sentiments. When they were sitting around with friends or relatives, I heard the same grumbles. And because these feelings were widespread, Jews suffered for them. One of the earliest anti-Semitic canards in this country is that Jews always saw things through a Jewish prism rather than an American one, that they were insufficiently American and that they neither understood nor embraced American values. Jews who wanted to dodge this sort of opprobrium were forced to do all sorts of things to prove that their loyalties rested with their country and not their religion. The Hollywood Blacklist, which was instituted by the film industry in 1947 against Communists, suspected Communists and so-called fellow travelers, provided a way for the Jewish moguls to demonstrate that they had no leftish leanings themselves and would purge their studios of anyone who did, even though many who did were fellow Jews. As Lillian Hellman put it, these moguls were like the Russian Jews who offered a bowl of soup to the Cossacks, hoping to disarm them. It didn’t work in either case.

But try as they did, it was as hard for Jews to exorcise their Jewishness, even under duress, as it was for them to appease the gentiles who detested them. As late novelist Hugh Nissenson once recounted, in a small, jokey parable, three students of different nationalities were asked to write an essay on elephants. The Englishman wrote “The Hunting of the Elephant”; the Frenchman, “The Love Life of the Elephant,” and the Jew wrote “The Elephant and My Jewish Problem.” We tend to see things through this scrim of sensibility often because of the duress under which we labored for so many years and the indignities we suffered for being Jewish. It has been a form of vigilance and protection.

Lots of reasons are adduced as to why Jews have survived when so many have tried to exterminate us. Here is another: that elephant memory of ours, that tenacious hold on our grudges, the thing that can make Jewish domestic life so difficult (one’s wife is likely to remember the one time you forgot to take out the garbage, five years ago), the thing that permits us to write off all those people who had expressed contempt for us, and the thing that won’t allow us to forget or forgive even the tiniest slight. My house was a fortress against forgetting. I think most Jews lived in that fortress.

But time passes. Jews assimilate. Blood thins. Fortresses crumble. And even the deepest memories fade. Nobody remembers Arthur Godfrey; T.S. Eliot and Ezra Pound are celebrated in college English classes; rich Jews wear Chanel; everybody has tattoos. And my daughter, my beloved daughter, drives a Volkswagen.

Neal Gabler is the author of “An Empire of Their Own: How the Jews Invented Hollywood.” He is currently at work on a biography of Sen. Edward Kennedy.