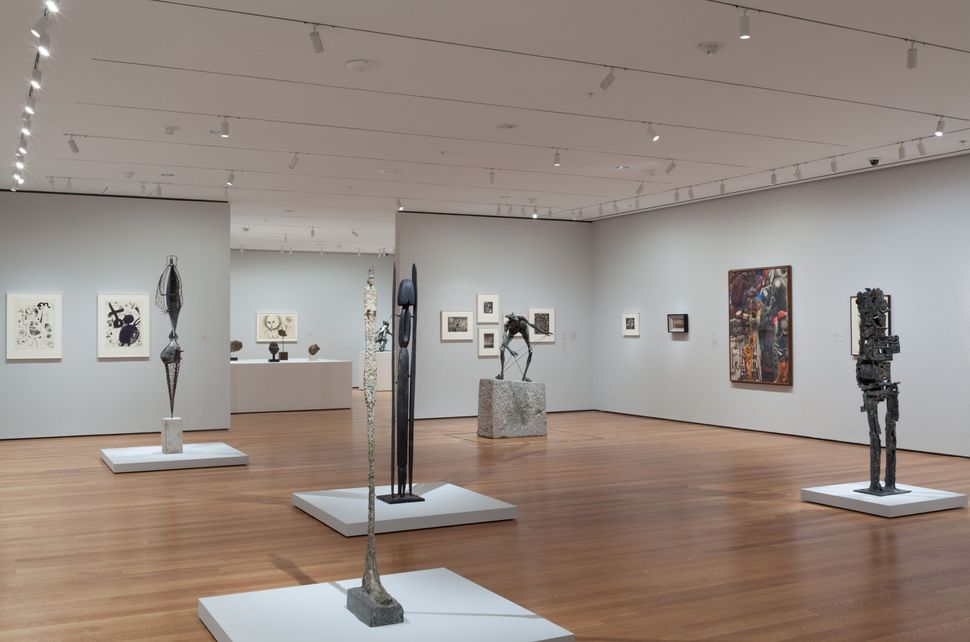 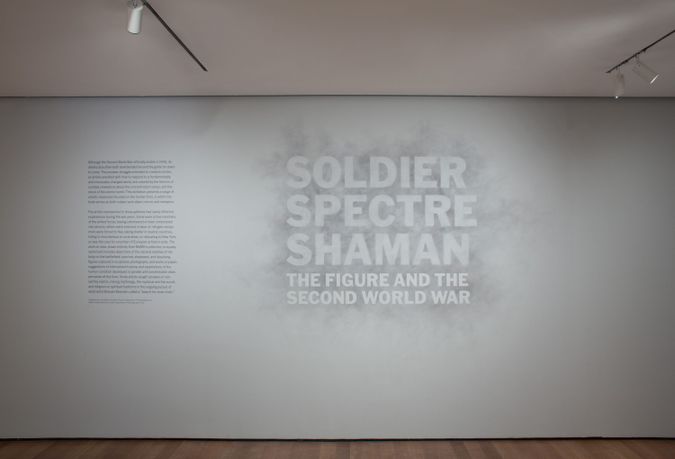 Image by Courtesy of the Museum of Modern Art

The first piece you see upon entering the new exhibit at the Museum of Modern Art, “Soldier, Spectre, Shaman: The Figure and the Second World War,” is a bronze sculpture situated alone in a brightly lit recess. In Maria Martins’s 1946 “The Impossible, III,” two cartoonish, squat bronze figures struggle to embrace. Human from the neck down, they sit naked, knee to knee, prevented from touching by the long spikes stretching out from the rims of the empty half-spheres they have in place of heads.

The sculpture — dreamlike, intimate and grotesque — establishes the tone for the rest of the exhibit, which spans from the prewar years to the mid-1950s, encompassing work from a variety of cultures. The works included, produced by artists responding to vastly different wartime experiences, tend to give shape to deeply personal experiences by presenting them through surreal, disorienting lenses. 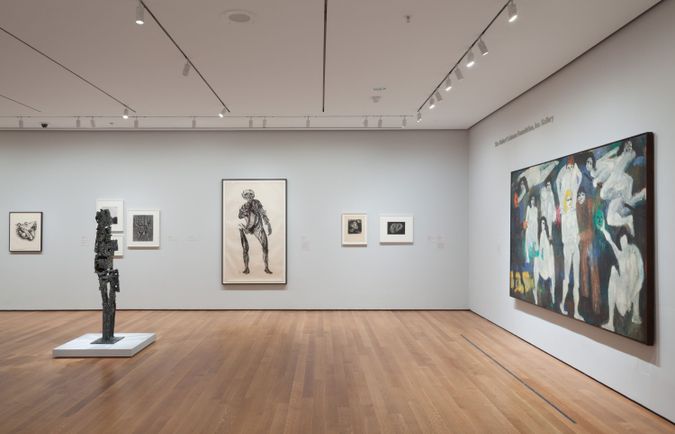 “You get this partially formed sort of primordial figure,” curator Sarah Suzuki said, speaking of Leonard Baskin’s “Hydrogen Man,” the American Jewish artist’s 1954 response to the test, in the same year, of the most powerful nuclear device ever detonated by the United States. It’s a full-scale woodprint of a warped, staggering human body whose transparent skin reveals the veins and arteries winding around his body. “I think it speaks to something that a lot of the artists in the exhibition are doing, which is using the figure as a means of working through this existential crisis that happens during and at the end of the Second World War.”

According to Suzuki, artists became preoccupied with using the human figure as “a mirror and metaphor” for working through experiences from the war. The instinct to analyze the impact of war through individual bodies was “really present in Paris at the end of the war, but present also in New York, in Tokyo,” Suzuki said. “Part of the idea for the exhibition was to bring some of those voices together in dialogue, when in the past we maybe would have looked at them as separate positions, but let them here come together.”

The show is drawn entirely from MoMA’s collection. “One of the things we were interested in was the history of the museum’s collecting,” Suzuki said. “A lot of these pieces have had an extended hibernation. It’s interesting to bring those things back that were seen as so critical at the moment they were made, that had such urgency, such agency, such power. To put them back on view and think about whether they’re still telling a story or if their power has dissipated over the years.” 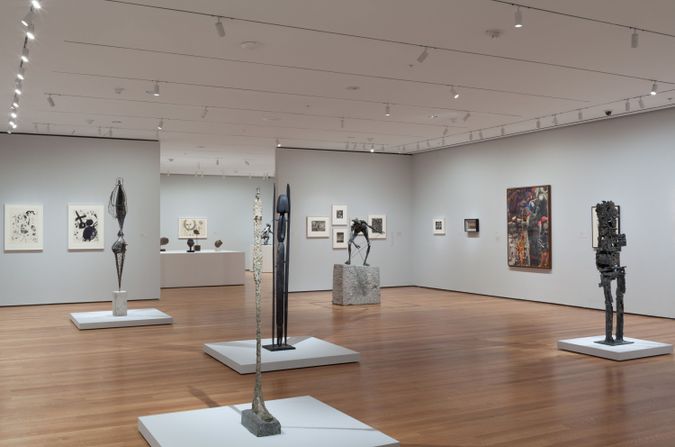 Victor Brauner’s “Talisman,” a featureless, skeletal figure made from tallow, embodies that urgency. Brauner, a Romanian Jew driven out of Paris when the Germans arrived, melted candles distributed by the Resistance to craft the figure. His use of the candles, intended to provide light while he was in hiding, speaks powerfully to the belief of wartime artists that continuing to create art was essential to survival.

“Talisman” is placed next to Edward Burra’s “Dance of the Hanged Men,” a large painting of hooded figures with mutated features. The figures take an almost sexual pleasure in hanging and brutalizing one another, showcasing one of the exhibit’s biggest strengths — demonstrating how war overwhelms societies while undermining individuals.

The intimacy of the exhibition allows the juxtaposition of pieces like Brauner’s and Burra’s to receive more focus and speak more powerfully than they would in a larger show. By representing the enormous crisis of the war at a more personal scale, the exhibit mirrors the content of the artworks it displays, making accessible through intense examinations of individual subject the atrocities too large to grasp.

“We’re trying to look at this kind of pervasive cultural anxiety at the end of the war,” Suzuki said. “Here was this incredible crisis as people were saying to each other: ‘What does it mean for civilization if one man can do this to another man?’ ‘What’s the point of me carving this thing when out in the world people are being carved?’ And the figure was one of the ways that artists were able to work through some of those ideas.”