Is ‘Lulu’ the Best Opera the Met Has Ever Staged? 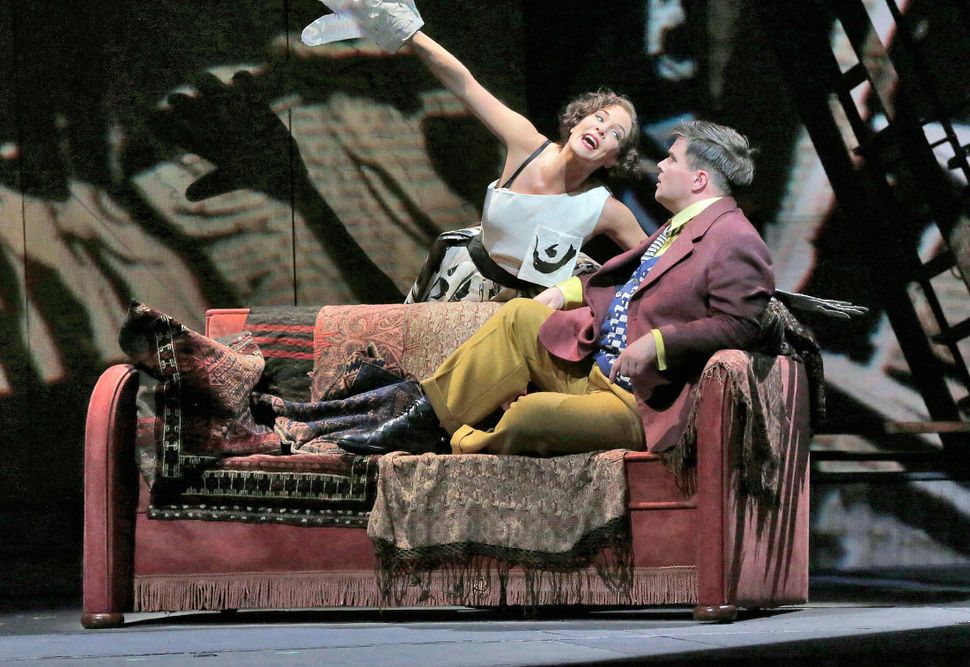 William Kentridge’s new production of Alban Berg’s atonal opera “Lulu” is sordid, seductive, sadistic, scandalous and, as one of the characters quips in German, full of schmutz. It might be the best new production the Met has seen since Kentridge’s daring 2010 take on Shostakovich’s “The Nose.” “Lulu,” based on “Spring Awakening” author Franz Wedekind’s two Lulu plays, is full to the brim with cholera, imprisonment, incest, murder, pedophilia, prostitution, rape, sexual slavery and syphilis; no wonder Wedekind called his second Lulu play, “Pandora’s Box.” And if diseases and all manner of sexual deviancy were not enough, Wedekind ended the play with its protagonist being savagely murdered by Jack the Ripper.

All this is only grist for the mill of the genius South African artist and director Kentridge, who has created an opera-on-meth roller coaster on the Metropolitan stage. His phantasmagoric drawings — recalling German Expressionists like George Grosz and Otto Dix — are projected onto the fabulous art deco sets by Sabine Theunissen, who also designed the sets for “The Nose.” The video projections show the characters’ faces animated through ink paintings; the artist’s hand — as if it is the hand of God — sometimes appears in the backdrop creating the images.

Two mimes, a man and a woman, create an alternate reality on the stage, sometimes mimicking the action, at other times victimized by the regime they inhabit. The woman (Joanna Dudley), who resembles Lulu, is a dancer and a pianist; the hunchbacked man (Andrea Fabi), who is dressed as a butler, serves the bloated millionaires who inhabit the Vienna, Paris and London settings of the play. Yet the numerous visual tactics that Kentridge utilizes do not overwhelm the opera but enrich it in multiple insightful ways.

The drawings appear on projected pages from dictionaries, and one of Lulu’s dresses by designer Greta Goiris is made of paper, yet this is not necessarily because it’s Kentridge’s preferred working material: Lulu’s third husband, Dr. Schön (Johan Reuter), owns a tabloid. Everything in this production has meaning; everything leads the audience to a sense of great revelation.

Attending a Kentridge opera might be the closest one can get to the experience the Russian impresario Sergei Diaghilev aimed for in ballet by combining sets and costumes by the likes of Picasso and Matisse, music by Stravinsky and Debussy, and choreography by Nijinsky, and so on. Kentridge aims for the same overload of the visual and auditory senses. On stage he combines video projections, drawings, animations, puppetry and pantomime. “Lulu” turns out to be the perfect opera for such an interplay of mediums, since the plot of the work itself involves characters whose roles relate to the creative arts: Lulu’s second husband is a painter; Dr. Schön is a newspaper editor and owner; his son, Alwa, is a composer.

The protagonist Lulu (performed by Marlis Petersen) is the proverbial black widow — each of her three husbands dies tragically. When the opera opens Kentridge’s chimerical drawings portray her as a beast, a boa constrictor and a tigress. Yet while she at first seems to be the villain, the opera humanizes her. At the age of 12, Lulu was seduced and corrupted by Dr. Schön — and, in a telling sign, his suit is a Granny Smith green, suggestive of jealousy, serpents and greed. There is also some intimation that she had been abused by Schigolch, a beggar who comes off of the street periodically to ask Lulu for money and to conduct other nefarious business on his behalf, and who might or might not be her father. Each of Lulu’s men renames her: Eve, Nelly, Mignon. Lulu plays multiple roles: She is an artist’s model, a dancer, a prostitute, a lover, a murderess, a wife and, finally, a muse. She is a stand-in for collective womanhood and the root of evil — accused, as only Eve could be, of original sin.

William Kentridge was born in South Africa to a family of German and Lithuanian-Jewish descent. This can explain his interest in the work of Alban Berg — who, though not Jewish himself, followed in the tradition of Austrian Jewish composers. With Hitler’s rise to power, atonal music was deemed “degenerate” and could no longer be performed in Germany; a similar fate greeted the art works of the German Expressionists, many of whose paintings were burned. Because the opera could not be performed in either Germany or Austria, it premiered in neutral Zurich in 1937. Kentridge alludes to the Nazi dislike of 12-tone music and German Expressionists by projecting drawings of prominent Nazis in Expressionist style at the beginning of the opera. He manages to create a similar effect to Michael Haneke’s 2009 film “The White Ribbon,” set in pre-Nazi Germany, which was superb at showing the forces that eventually led to the Holocaust: a prequel of sorts.

“Refuse the Hour,” Kentridge’s multimedia 2012 chamber opera, which came to the Brooklyn Academy of Music in October earlier this year as part of BAM’s annual avant-garde Next Wave Festival, explores his interest in another form of “civilized” control: the scientific effort to master time. It begins with a child recalling a story his grandfather told him about Perseus and the futile efforts of the Greeks to outwit fate. The work builds from Einstein’s theory of relativity and realization that efforts to synchronize train-station clocks across Europe would fall short of true precision, expanding into a broader inquiry into man’s ability to control time and the flow of history. Kentridge also refers to the efforts by European imperialists to impose synchronized time on African states, an act met with rebellion by local subjects who “refused the hour.”

Critics have noted that Kentridge’s anti-apartheid stance reflects the mixed political attitude that Jews in South Africa espoused; while some were staunchly anti-apartheid, others were more accommodating. Some of his films explore Jewish implication and involvement in apartheid; recurring and overtly Jewish characters Felix Teitelbaum and Soho Eckstein are physically reminiscent of Kentridge. Eckstein is an industrialist and therefore accommodationist to the apartheid regime.

“Lulu” and “Refuse the Hour” are interoperatic works; they share not only Kentridge as director but also the designer Theunissen, costumer Goiris, and Dudley (the female mime in “Lulu”). Like “Lulu,” “Refuse the Hour” combines multiple mediums: dance by Dada Masilo, original music by Philip Miller, video by Kentridge and his collaborator Catherine Meyburgh, mechanical sculptures in collaboration with Theunissen, Kentridge himself appearing on stage to narrate the work, and vocals by Ann Masina and Dudley.

“Refuse the Hour” is surely a powerful work, but “Lulu” is a masterpiece. Don’t be afraid of Berg’s atonality; allow Kentridge to take you on his hallucinatory animated magic-carpet ride and you will come out after a mere four hours with a vision of art that will make your need to understand Einstein and the laws of the universe pale before/bow to your appreciation of a genius at work in a complicated cosmos.

Is ‘Lulu’ the Best Opera the Met Has Ever Staged?