Painting the Commandments, All 613 of Them 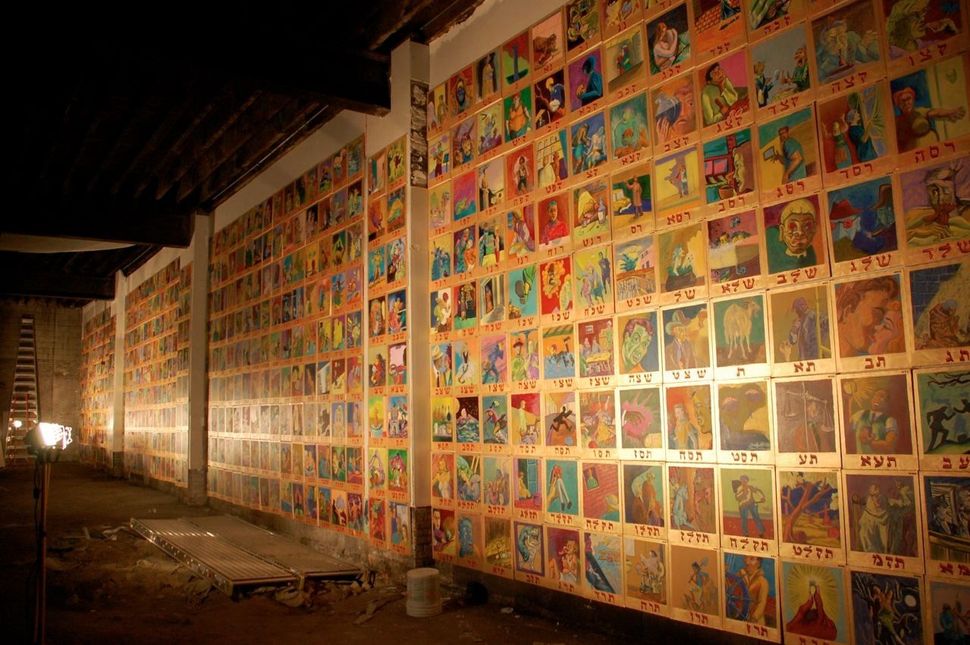 While Archie Rand was eating lunch at an Indian restaurant in Manhattan’s East Village in 2014, his agent told him and his wife that she’d landed a book deal to publish his series of 614 canvases — one per Old Testament commandment and an extra title painting. “I thought that some hippie in Saskatchewan had proposed mimeographing the text onto Xeroxed sheets of recycled Yoo-hoo labels,” said Rand, who serves as a professor of art at Brooklyn College.

Rand had reason to be skeptical. Back in 2006, when I viewed the works in Rand’s studio — two years before they hung very temporarily at a Brooklyn warehouse — I learned that it took Rand and two assistants three days just to prime the canvaseṣ

“It took a while for the impact of this to dawn on me before the three of us did a happy dance in the back of the restaurant,” Rand said of his publishing deal.

Writing in these pages in 2006, I was skeptical of the series’s chances of finding any sort of even temporary asylum in a museum. After all, the series demands roughly 2,000 square feet of exhibition space. “And beyond these problems, who has the time and patience to see 613 canvases? And who would pay for 613 color plates for a catalog?” I wrote. Rand agreed at the time, and told me, “You are basically cutting yourself off from any source of aesthetic applause or nutrition.”

Nearly a decade later, I’m about ready to eat my words, as I thumb through the book, which is roughly 650 pages and devotes a page to each of the paintingṣ And Rand tells me that the 614-canvas series is packed in boxes, but destined for exhibition in its entirety in 2017 at the Contemporary Jewish Museum, in San Francisco.

Rand chose to paint and number the series, which he sees as a single work, in the order in which the images and captions occurred to him rather than following any rabbinic numbering of the commandmentṣ For example, a man, whose dress loosely evokes a musketeer, sits on a tree branch with a saw, severing the very platform that is supporting him. The commandment? “Not to have relations with your mother,” from Leviticus 18:7.

Although testing the laws of gravity by sawing off the tree branch upon which one sits proves an ingenious metaphor for incest, Rand insists the works aren’t illustrations of the Bible. “A majority of the paintings have no articulated literal connection, but rather a subjective relativism that would be counterproductive to even try to explain,” he said.

Asked if the elongated timeline of the series, from studio to book and then to exhibit, left him wishing he’d had the opportunity to include more timely accessories — say, iPhones instead of the rotary phone in No. 475, “Not To Withhold Wages or Fail To Repay a Debt” — Rand says he wasn’t interested in the works being relevant.

“I didn’t pay much attention to the declarations of each commandment and treated them equally,” he said. What seem to be difficult passages “are just accidentally current and held no more significance for me than did carrying out the procedure of the red heifer,” he added. “After what ISIS just did to Palmyra, ‘destroying the city that has turned to idol worship [No. 33]’ is, at least right now, one of the most dicey passages in the book.”

Several of the works in the series also quote from art history. When I asked Rand about a couple that seemed to draw from Manet paintings — “The Spanish Singer” and “The Fife Player” – he said that he was thinking about art historians’ “deification” of Manet.

“Painters think differently than scholars,” he said, turning to fellow Jewish painter Barnett Newman for the famous one-liner, “Aesthetics is for the artist as ornithology is for the birdṣ”

Menachem Wecker is a freelance reporter based in Washington, D.C. He is a co-author of “Consider No Evil: Two Faith Traditions and the Problem of Academic Freedom in Religious Higher Education” (Cascade Books, 2014),

Painting the Commandments, All 613 of Them