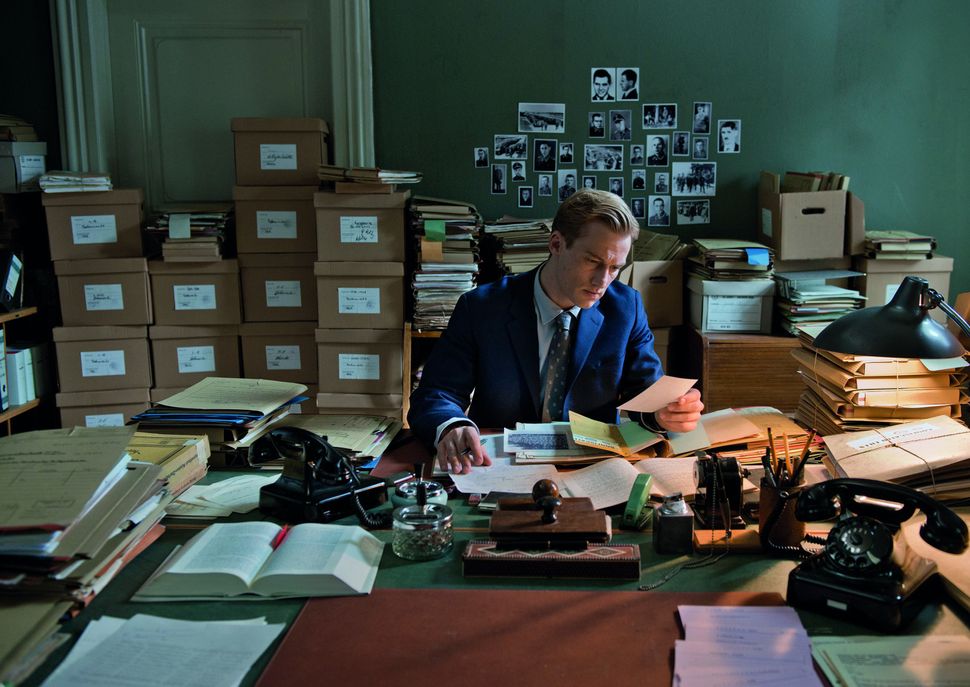 We’ve reached a pivotal cultural moment in Holocaust historiography and memoir, poised between the final thoughts of the last survivors and the attempts of their children — and, more recently, their grandchildren — to make sense of their legacy.

It’s a phenomenon with an equivalent in Germany, where the so-called Third Generation has been reckoning with the deeds of their grandparents and with their parents’ silence and shame. A symposium this past June in Laupheim, Germany, “The Third Generation: The War Grandchildren and History,” explored topics including the return of Jews to Germany, postwar literature and what one speaker called “the long shadow of our past.”

Germany’s entry this year in the Oscar category for best foreign film is “Labyrinth of Lies,” whose somewhat more decorous German title was “In the Labyrinth of Silence.” Focusing on the investigation leading to the 1963–65 Frankfurt Auschwitz trials, the film, like Bernhard Schlink’s “The Reader,” is about the varieties of wartime complicity and the tangled relationship between generations.

The film’s co-writer and director, Giulio Ricciarelli, born in Italy in 1965 but now working in Germany, is arguably a “war grandchild” — sufficiently distanced from events to suggest both the necessity and the difficulty of assigning blame to ordinary people ensnared in the murderous acts of a criminal regime.

The cultural parallel in America may be guilt over sins of omission: the recurring question of whether our government, our people, even American Jews did enough to rescue relatives, loved ones and others caught up in the European disaster. Two years ago, New York’s Museum of Jewish Heritage — A Living Memorial to the Holocaust explored this dilemma in an exhibition, “Against the Odds: American Jews and the Rescue of Europe’s Refugees, 1933–1941,” finding heroes who overcame the hurdles of indifference, anti-Semitism and bureaucracy.

This question of culpability echoes through recent memoirs and histories, often inspired by the discovery of family letters or other artifacts from Europe. Third-generation memoirists, as the famous German formulation insists, are innocent by birth date; they could not have changed history. But the family legacy haunts them.

Their response is to try to reclaim lost stories, a process made possible, but also complicated, by the passage of time.

The template for these quest narratives was established by Daniel Mendelsohn’s 2006 memoir, “The Lost: A Search for Six of Six Million.” Raised on family lore, intrigued by a trove of letters, provoked by the gaps in his knowledge, Mendelsohn embarked on a complicated journey — physical, literary, biblical and existential — to unravel the precise fate of his great-uncle, his great-aunt and their four children.

His reporting is meticulous. But so many decades later, with memories blurred and so many potential witnesses gone, some facts are impossible to establish. Beyond that, Mendelsohn emphasizes not just the limitations but also the artifice and even the moral failures implicit in storytelling.

Mourning his family, he writes: “There is so much that will always be impossible to know, but we do know that they were, once, themselves, specific, the subjects of their own lives and deaths, and not simply puppets to be manipulated for the purposes of a good story, for the memoirs and magical-realist novels and movies.”

In his 2013 history, “The Family: Three Journeys Into the Heart of the Twentieth Century,” David Laskin explores the differing fates of three branches of his family: the Americans who thrived, founding the brassiere company Maidenform and other businesses; the Israeli cousins who became Zionist pioneers, and the relatives who remained in Eastern Europe.

As emigration routes closed, Doba, a cousin in Vilna, Lithuania, wrote bitterly to her father, who stranded by war in New York: “Doesn’t the family there want us? Why do they remain indifferent in these hard times?” Laskin later reported that one relative did hire a lawyer to begin the immigration process, to no avail. As far as Laskin could determine, Doba died in the gas chambers of Sobibor.

Laskin ends his family epic on a note of humility: “In telling their story, I have made it my own…. It would be foolish to believe that I, that we, that our generation alone can see and say the truth. I know there are events we refuse to acknowledge, tragedies we steer clear of, facts we deny at our peril, fictions we entertain to deceive ourselves.”

Glenn Kurtz’s history, “Three Minutes in Poland: Discovering a Lost World in a 1938 Family Film,” is launched by his discovery of a home movie made by his grandfather, David Kurtz, on a holiday visit to his birthplace, Nasielsk, Poland, on the cusp of war. In an assiduous feat of reporting, the author undertakes to find out everything he can about that town, where most of the roughly 3,000 Jewish residents died in the Holocaust.

Filled with both banal and heartbreaking detail, the book, like the home movie, serves as a memorial to what was lost, but Kurtz declares, “No film, no memorial, and no recollection could restore, retrieve, recover, or revive this world.” For the few survivors, he writes, “The reality, the life and loss of their community, is inexpressible.”

Ineffability has always been a theme of Holocaust remembrance. The impulse to chronicle these lives, these deaths, remains tempered in these third-generation books by a sense of the elusiveness of both truth and understanding.

Sarah Wildman’s 2014 memoir ably straddled this paradox. Its title, “Paper Love: Searching for the Girl My Grandfather Left Behind,” foregrounds the importance of letters as both lifeline and reproach and the fragility of love in the face of war, exile and absence.

After the death of her beloved bon-vivant grandfather, Karl Wildman, the writer discovers that he had a more complex past than she ever realized, including a relationship with a woman, Valerie Scheftel, described by his widow as “your grandfather’s true love.”

Although Karl left Vienna without Scheftel, he never parted with her gorgeous letters, dating from 1938 to 1941 and expressing both love and, with increasing desperation, her need for rescue. But Karl, in America, was a financially strapped young doctor, and rescue requires not just determination but also cash. Like other memoirists, Wildman journeyed to Europe to piece together Scheftel’s story and to wrestle with her own place in the saga.

“We were shaped by the stories our grandparents had told us, or not told us. The stories were tactile and yet dusty, faded; they were real, and yet totally unfathomable…. We are the last to know and love survivors as who they are — as human, as flawed, as our family. What now do we do with that knowledge?”

Similarly, in a 2015 memoir, “A Fifty-Year Silence: Love, War, and a Ruined House in France,” Miranda Richmond Mouillot sets out to uncover a mystery about lost love — between her maternal grandparents, Anna and Armand. They met in Strasbourg, spent the early war years in France and eventually escaped to Switzerland. After living mostly apart, they married in 1944, only to separate, divorce and remain deeply estranged after the war.

Richmond Mouillot shares with other third-generation memoirists a mounting urgency: the conviction that, with the last survivors and the last witnesses dying, it may soon be too late to find any answers at all. Perhaps too delicate in her probing, too fearful of causing pain, she leaves us with her own uncertainty: “Maybe my grandparents loved each other, maybe they didn’t. Maybe both.” And her 97-year-old grandmother’s valedictory: “[I]t’s so long ago now. Who can remember?”

Julia M. Klein, a cultural reporter and critic in Philadelphia, is a Forward contributing book critic. Her great-uncle, Abraham, for whom her father was named, was among those killed in the Holocaust.