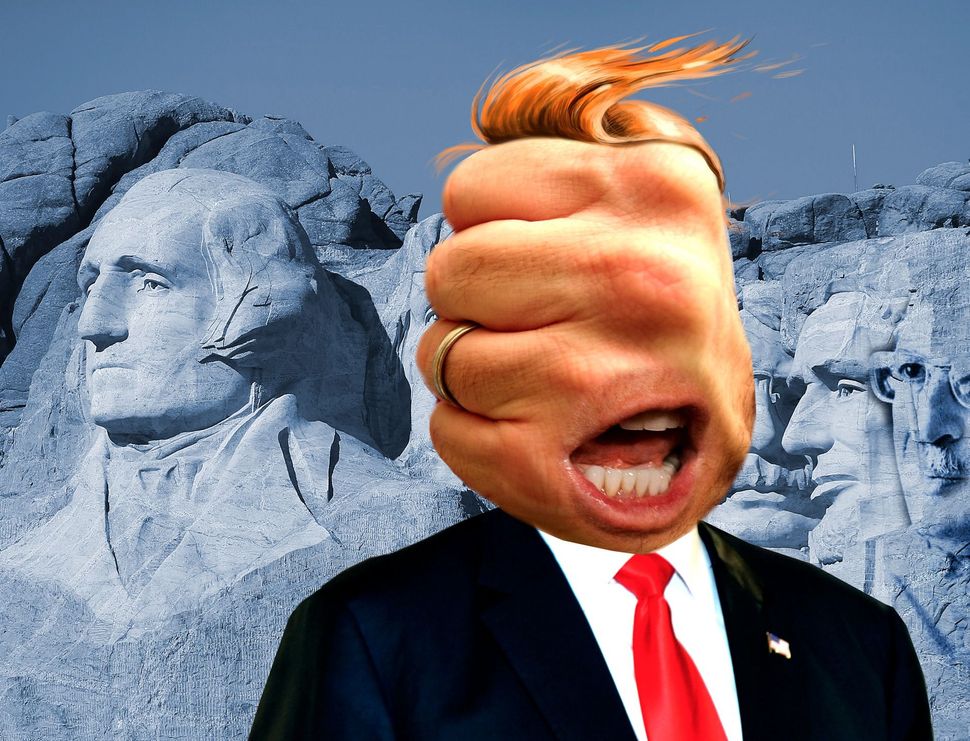 Reflecting on 2015, I was reminded of Bernard Malamud’s quote, “All men are Jews except they don’t know it.” Malamud later clarified that he was talking about “how history treats all men,” which is to say, badly. It is a deeply empathic observation, as it understands that suffering and humiliation are inextricably bound into the human condition, and it assumes a commonality beneath all our apparent differences, whether we recognize it or not. Basically, we are all screwed.

One of the long-standing virtues we Jews have is that we do know it, and as much as anything, this knowledge has informed our worldview generally and our politics specifically. Needless to say, Jews are among the most successful groups in America. Despite quotas that debarred us, we fought our way into law and medicine and business, to the point where Jewish dominance in these fields is now a humorous cliché. (To wit, a lawyer is a Jew who is afraid of blood.) But whereas most other successful groups earned their way out of the sort of liberalism and compassion that served as self-interest for poor Americans on the rise, we Jews never have. We continue to vote overwhelmingly Democratic, continue to donate to charities that benefit the powerless, continue to fight for the rights of others, rights that have long ago been afforded us. In short, in Malamud’s metaphoric sense, we continue to act as Jews even when we don’t have to.

So while it may be comforting to think that all men are Jews, the sad fact is that they do not know it: Malamud’s additional clause, more often than not, eclipses the idea that they are. In truth, not too many people want to think of themselves as Jews, which is to be stigmatized, humiliated and sometimes disempowered. And frankly, not too many people want to exercise the kind of generosity of spirit that has served as both Jewish exceptionalism and self-protection. If we Jews are good, it is because we know what it is like to be mistreated. And if we are vigilant, it is because we know what is like to be resented, envied and hated. We may be the chosen people, but this has often meant that we are chosen for extermination.

So, in a way, you could say that in America, most people would do anything not to be Jews — and they pretty much have. For all our trumpeting of American exceptionalism, this country was never especially kind or compassionate to the downtrodden. Its history is full of hate and savage brutality, and even we Jews often succeeded despite the country rather than because of it, which is not to say that America is any worse than most other countries, only to say that it is not anywhere near being as good as Americans think. As commentators have noted recently, the near-unanimous chorus of anger toward admitting Syrian refugees echoes the near-unanimous chorus against admitting Jewish refugees fleeing the Nazis 70 years ago. We can be a very cold-hearted bunch — ironically so. As Stephen Colbert put it, “My grandfather did not travel across 4,000 miles of the Atlantic Ocean to see this country overrun by immigrants.”

Still, through the years there has been a sheepishness over being — how shall I put this? — jerks. Oh, sure, there have always been large pockets of vainglorious ignoramuses, vociferous opponents of those most in need of compassion and assistance. But even when people felt this way, they also were loath to admit it too loudly, because they knew they might be upbraided for it, or because they knew it was wrong, or because, at some level, they instinctively knew that all men are Jews, including them, even if they are self-hating ones.

The lesson I take away from 2015 is that this is no longer true. In 2015 something snapped. We lost our last dram of shame. We got the spectacle of one of our two major parties — in its entirety — not only dumping on immigrants but also smearing them, not only detesting the poor and powerless but also declaring their major goal to deny them health insurance. And tens of millions cheered — cheered their own churlishness. Donald Trump’s candidacy first arose, and it has been maintained on rage against immigrants. Moreover, he is the first presidential candidate in my recollection who openly ridicules the poor as “losers.” (Mitt Romney at least did it behind closed doors.) But where Trump goes, every single Republican candidate, and nearly all the Republican electorate, follows. We might very well wind up in 2016 with a president whose platform is one of hate: not hate disguised as political ideology, just plain hate.

The prevailing political meme in America over the past decade has been polarization. We hear constantly that an ideological chasm separates Democrats from Republicans, liberals from conservatives. That is certainly true. But this year we discovered that America may not be just polarized. It may be cracked — cracked not so much ideologically, though it is, as morally and psychologically. The first permits us to make equivalencies; our differences are just a matter of politics. The second doesn’t. America has “come out.” It isn’t pretty, but it isn’t likely to be fixed, because to do so would require not fixing politics but repairing the human soul.

In 2015, then, we found out that Malamud’s metaphysical, metaphorical assertion that all men are Jews no longer holds, if it ever really did. Some men are Jews. Some have lost their capacity to feel, and in doing so have lost their decency. The fault line between the two is the one that runs across our country now and across us.

Neal Gabler is the author of “An Empire of Their Own: How the Jews Invented Hollywood” (Crown, 1998). He is currently at work on a biography of the later senator Edward Kennedy.