Why I Still Celebrate Christmas Without Guilt 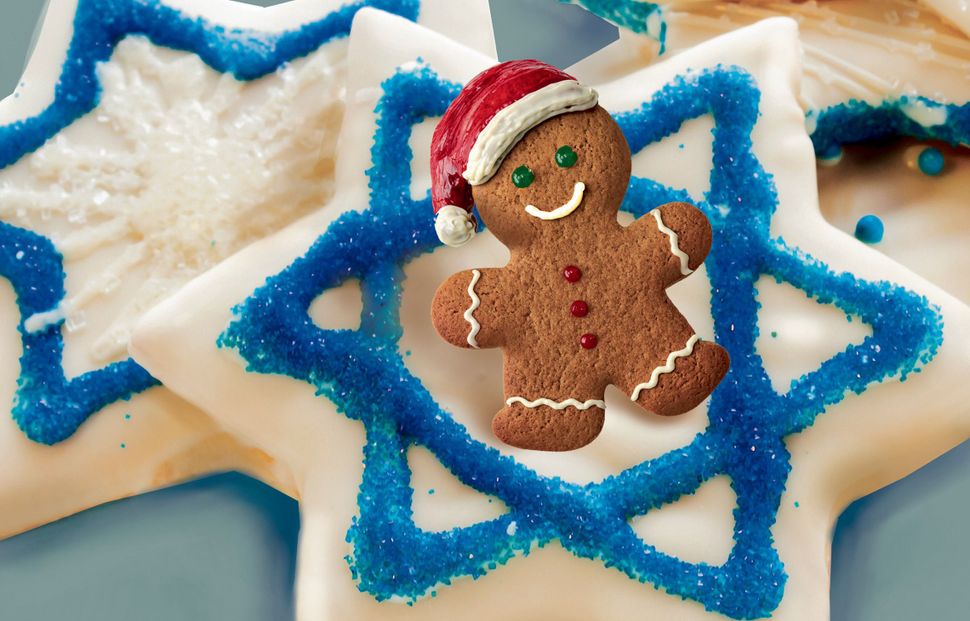 During the month of December, back when I was 12 and studying for my bat mitzvah, my mom and I would scour the house each Saturday morning before my tutor arrived, in order to locate and hide evidence of Christmas.

We had ample time before 1 p.m., but we waited until the last minute to unhook the wreath on the front door and carry it inside. We placed it beside our Christmas tree in the den at the back of the house. We gathered the stockings and threw them in there, too. We locked the door for extra precaution. The Hanukkah menorah stayed on the mahogany cabinet in the dining room, where I practiced my Hebrew.

My teacher arrived. For an hour I chanted my Haftara portion, recited the blessings and read her my speech. When she left we replaced everything, until the following Saturday rolled around.

My parents and I have always celebrated Christmas. During my childhood, I shot out of bed at 6 a.m. on Christmas morning to read Santa’s letter in a rolling cursive that didn’t resemble either of my parents’ writing. I remember the fateful day when I was about 7 and I accidentally stumbled upon his special wrapping paper, hidden inside a trunk, and I realized he didn’t exist. In the stacks of old Kodaks, I’m wearing an emerald frock with white frills, crying on Santa’s lap in the mall or tearing through wrapping to find packages of Barbie dolls. I can’t recall a single Hanukkah picture in our leather-bound photo albums, even though I was raised Jewish and we also celebrate that holiday. We would light the candles and eat latkes. As a child, I occasionally received a bookmark and played dreidel, but those traditions have since dwindled.

I’ve heard that many Jews celebrate Christmas — though I don’t actually know any who do except for me — but I’ve always felt slightly guilty about partaking in the holiday. It’s festive and cozy in the cold of winter. It’s a party to look forward to, with a month of happy hours, baking and movie marathons leading up to it. But my friends call me, however jokingly, a “bad Jew.”

So, I justify it by saying, “My dad is Christian, I swear!”

This is true. My dad’s mother came from a wealthy Jewish family on the Rhine in Germany. Her father was a patriot and couldn’t comprehend that something like Nazi occupation and Hitler’s rise to power could happen to his beloved country. After Kristallnacht, though, my great-grandparents sent my grandmother to England on the Kindertransport. Her parents and brother stayed behind for 10 months, until the eve Hitler invaded Poland to start World War II, when they caught the last train out on a French visa. Years later, my grandmother reunited with them in Portland, Oregon.

She married my Opa — German for “grandpa” — who was president of his fraternity at the state university and an all-American Lutheran. They raised their five children at the Congregational church. When I visit my dad’s family on Christmas Day, I read my little cousins “’Twas the Night Before Christmas” and gaze at the nativity scenes and frosted reindeer figurines.

I often use this story as a way to validate Christmas — and even did so just a few days ago, when a friend asked why I celebrate the Christian holiday if I’m Jewish.

Last year, Passover and Easter landed on the same weekend and I went home with my ex-boyfriend, who celebrates the latter.

We attended church services, and as I sat on a pew in the land of New Canaan, Connecticut, I thought about my mom back home, mixing charoset. At the same time, my dad’s family was enjoying slices of honey-baked ham, Cadbury chocolates and a backyard egg hunt. I could have used my usual justification, “I’m Christian, too!” for singing hymns instead of “Dayenu.” But for once I didn’t. It felt fraudulent somehow.

When the holiday season approaches, I can’t help but count down the days until Christmas. No one is allowed to decorate the tree until I fly home. We dress it in funky, antique ornaments my mom collected over the years. There’s a baked, clay cutout of my baby foot, a paper mache fish and my favorite: a walnut painted like a mouse face, nestled in its shell and tucked inside a blanket.

Now in my 20s, I don’t wake up until 9 a.m. on Christmas Day, but I still walk to the family room with a smile. It’s a day of homemade breakfast, family and a cocktail hour. My dad puts on a jazz vinyl of “The Nutcracker,” and the three of us open presents wearing our glasses and pajamas.

When my dad’s mother passed away four years ago, we acquired several of her ornaments from the 1950s, which she bought in the States. They’re hand-painted glass orbs attached to sheer ribbon. One is covered in snow-white glitter and has a bombed-out hot-pink center, like an imploded star. Another depicts a silhouetted scene of white reindeer against an ice-blue background.

Each year I hang these ornaments at the front and center of our tree. Even though they aren’t from her childhood as a German Jew, they remind me of my grandmother’s story — how she fled her country before the age of 13 and traveled alone to America. They remind me of her desire and struggle to assimilate here, like how she couldn’t join a sorority in college because she was Jewish.

But most of all, they remind me to stop feeling guilty — or maybe just to own up to the real reason I celebrate Christmas.

Her mother, my great-grandmother, also embraced the holiday after she fled Germany and settled in Portland — not to change her religion or to adapt, but simply because she liked a good party.

Well, that’s my excuse, too.

Why I Still Celebrate Christmas Without Guilt