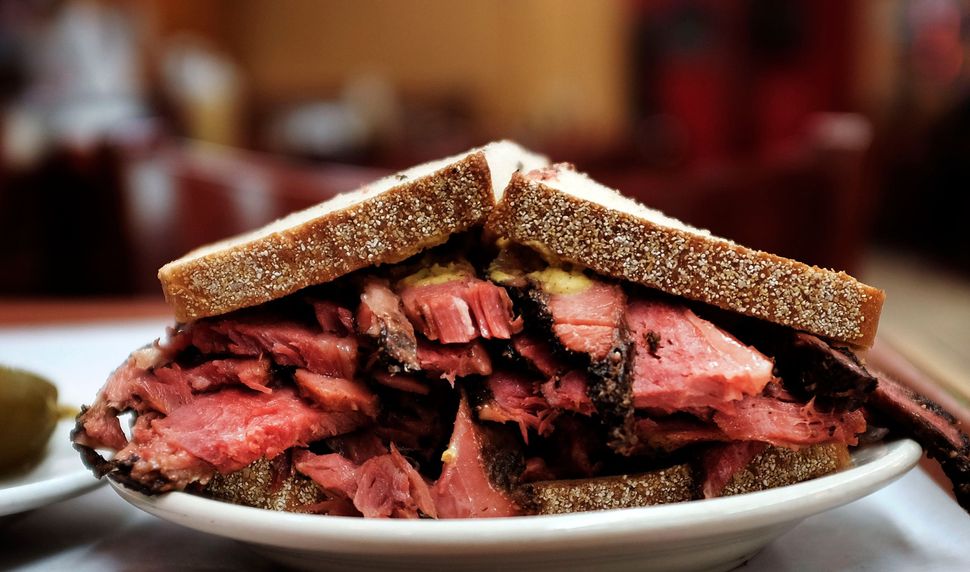 Pastrami on Rye: An Overstuffed History of the Jewish Deli
By Ted Merwin
NYU Press, 256 pages, $26.95

I have always loved the theater, because no matter how many years of confuting experience intervene, Pavlovian associations lead me to expect that corned beef sandwiches at the 2nd Ave Deli will follow every play in New York City. When I was a child, visits to a Bowery repertory theater meant meat. I cannot remember what the titular wild duck of Ibsen’s play is supposed to symbolize; to me, it signaled an appetizer of schmaltz (chicken fat) smeared on rye. While watching Eliza Doolittle gush about the Embassy Ball in “Pygmalion,” I wondered whether British aristocrats served chopped liver. My childhood dramatic aesthetic accorded well with a Bertolt Brecht poem my father read to us on the way to see “The Threepenny Opera”: “Amongst the highly placed / It is considered low to talk about food. / The fact is: they have / Already eaten.”

Theater nights provided rare interludes of gluttony in our family’s otherwise virtuous, disciplined diet. Each weeknight’s dinner was served with near-religious regularity. Monday, for instance, we ate a mix of tofu stir-fry inspired by Moosewood and Weight Watchers — it was accompanied by a lumpy mélange of peanut butter, soy sauce and ginger, an undressed green salad, steamed green beans and brown rice, all served with a special spoon that measured your helping exactly. These meals celebrated profound bourgeois virtues, like discipline, restraint and orderliness. I never exactly enjoyed the limp green beans of my childhood (do Catholics relish their communion wafer?), but they do command my reverence and faith.

I understood deli’s fatty, salty excess as a sin, and thus an object of desire. Driving into lower Manhattan we entered a dark, urban night town, one Giuliani had only recently expunged of sex workers and drug addicts. The lurid tabloid articles taped to the 2nd Ave Deli’s windows, chronicling the brutal and unsolved murder of its founder, Abe Lebewohl, as well as the sign offering a reward to any aspiring private eye who cracked the case, felt cribbed from an old noir. Even the overstuffed corned beef sandwich seemed to incite violence: I had to tear bites from the mass of meat, and its red juices dribbling out of my mouth, visible in the deli’s many mirrors, unmistakably resembled blood. The crimes and transgressions we had watched on the theatrical stage seemed to haunt the subsequent deli dinner. The restaurant’s walls, festooned with photographs of movie stars, surely encouraged this bleeding through of dramatic fantasy. The deli, no less than the theater, offered you a space to imagine yourself outside the daily, quotidian rituals of your upbringing.

Ted Merwin’s “Pastrami on Rye: An Overstuffed History of the Jewish Deli” both elicits and helps explain memories like mine. Merwin has captured how delis continually helped American Jews reimagine themselves. Delis provided immigrants’ children with halfway houses into American culture, and early migrants to far-off cities consecrated them as shrines to New York. Jews celebrated bar mitzvahs and weddings with deli meats, but pastrami and other meats also inspired carnal, even erotic desires. (“Wurst,” the critic Alfred Kazin reminisced, “carried associations with the forbidden… with spices that teased and maddened the senses to demand more, still more.”) When suburbanites rejected deli, they pronounced their new cultural loyalties, whether through the symbols of bland, whitened and convenient supermarket meats or vegetarian, low-fat, and ethnic cuisines of the 1970s and ’80s. So, even as they were killing the deli as a cultural institution, they continued to use it as the wide slices of rye into which they stuffed their dreams and aspirations.

Though Merwin cutely locates deli’s origins in the ancient sage Hillel’s invention of the “lamb-herb wrap,” his book surprisingly pushes against the idea that American Jews brought deli culture with them from the Old World, or that deli thrived in first-generation, immigrant enclaves like Manhattan’s Lower East Side. Actually, Merwin shows, deli meats cost too much for poor Jews to buy regularly, especially given the cheaper luxuries offered by soda fountains, candy stores, coffeehouses and fried fish stalls. Meanwhile, settlement workers pressured their clients to relinquish “spicy, dark, odiferous ethnic foods in favor of bland, white odorless ones.” Longtime Americans saw spices, especially garlic, as dangerously sensuous, intoxicating gateway drugs. As the temperance advocate Ella Kellogg put it, “Condiments such as pepper, pepper sauce, ginger, spice, mustard, cinnamon, cloves, etc.” were “unquestionably a strong auxiliary to the formation of the habit of using intoxicating drinks.”

Only in the interwar period did delis attract a mass audience, not of immigrants but of their children. Meat restaurants became unlikely temples, ”secular synagogues,” for American Jews. In delis, Jews found meeting spaces that were palpably, culturally Jewish without being religious. In part, that is because they served (much cheaper) non-kosher meat. While some unscrupulous owners put in the window a Hebrew sign saying “meat meat”, relying on the close visual resemblance between the Hebrew words for ”meat“ and “kosher” to fool customers, other argued that kashrut “was difficult to define and can admit of many meanings,” casually shrugging off rabbinic authority.

But second-generation immigrants also saw delis as places to display their newfound prosperity. Glitzy, theater-district restaurants repackaged Broadway stardom as an attainable middle-class commodity; class was so central to the appeal of a restaurant like The Stage Deli that comedian Joe Smith joked, “If you get an ulcer from eating here, it’ll have on a tuxedo.” Smith’s mixture of high and low captured the paradox of delis like the Rialto, whose advertisements featured dapper, slim couples sipping cocktails beneath palms, but whose humbler menus “ranged from tongue and cheese sandwiches to pastrami omelets.”

Restaurants like The Rialto brilliantly sold dreams of luxury but delivered comfort food and comfortable, Yiddish-accented environs. Delis thrived. For many families, dinners of salami, corned beef, rye, pickles, mustard and celery tonic became a weekly, secular Jewish ritual. But almost as soon as they achieved their prominence, delis began a long, slow decline. The first culprit was World War II. Beef rationing taught Americans to subsist on very meat-limited diets, and the draft forced many Jewish men to “eat ham for Uncle Sam” and thus learn how to survive without familiar foods. (It did not help that, as The New York Times noted, popular meat words like “delicatessen,” “frankfurters” and “bologna” were “of Axis origins.”) In the ’40s, geographically mobile Jews carried delis with them to Chicago, Los Angeles, Miami and even the Deep South. Deli increasingly appealed to non-Jews as well, and in 1965, American astronauts on Gemini 3 brought a corned beef sandwich into space, though they soon concluded that “our life-support system wasn’t prepared to cope with the high-powered aroma.” The Gemini debacle proved an apt symbol for the deli’s struggles in the sanitized and antiseptic suburbs. There, assimilation and space attenuated the ethnic ties between Jews so central to deli culture. Meanwhile, the price, convenience and quasi-scientific feel of supermarkets overpowered many niche food vendors. The deli could not compete with the deli counter.

In the ’50s and ’60s, deli companies launched sophisticated advertising campaigns to appeal to a broader, non-Jewish public. Levy’s Real Jewish Rye Bread placed iconic posters in the New York subways, featuring blissful American Indians consuming deli sandwiches and pronouncing, “You don’t have to be Jewish to love Levy’s,” and Hebrew National exploited the odd erotic appeal of its sausages, as in an advertisement in which “Miss Hebrew National Frankfurter of 1952… cradled a long hot dog above her ample cleavage.” But deeper shifts in how Americans ate doomed this bid for national appeal. In the 1970s, a reawakened interest in “ethnic” food passed over staid, assimilated deli for exotic, Oriental flavors and the fitness obsession that swept America in the ’80s rendered deli’s salt and fat unattractive. By the 1990s the deli survived mainly as an object of nostalgia and memory. In movies and TV shows — think “When Harry Met Sally” — and Larry David’s ” Curb Your Enthusiasm,” delis became set pieces, or jokes to explore Jewish masculinity, intermarriage and sexuality: Think of Alvy Singer taking his girlfriend to the Carnegie Deli, only to be horrified as she orders pastrami on white bread with mayonnaise. Delis once sold meat by cashing in on show business’s allure; now, they exist largely as exploitable symbols of Jewish culture within show business. Similarly, delis function as modest museums to a Jewish immigrant past. “Both Jews and non-Jews made pilgrimages,” Merwin writes about the 2nd Ave Deli.

In other words, George Bernard Shaw and ptcha (jellied calves’ feet) filled closely related roles in my upbringing. One cultivated my taste for European high culture, the other my tribal, New York Jewish consciousness of food, body and roots. But both were anachronisms, throwbacks to social worlds that I never experienced directly. Both had to be “entertaining,” as indeed is Merwin’s book, which is chock-full of witticisms and lovely anecdotes. Merwin has written a spectacularly funny, engaging and sharply analytical book. Still, its very frenetic energy, like the “wacky promotional video” called “’What a Pickle!’ The World’s Greatest Deli Musical,” playing on loop at the Carnegie Deli, suggests the melancholy condition of a once-sizable culture that increasingly markets itself with kitsch. It is a sad irony that while delis rose to prominence selling Jews the fantasy of being American and prosperous, they now subsist on the margins by selling prosperous Americans the illusion of ethnic Jewishness.