Linda Lavin Is the ‘Mother’ of All Jewish Mothers 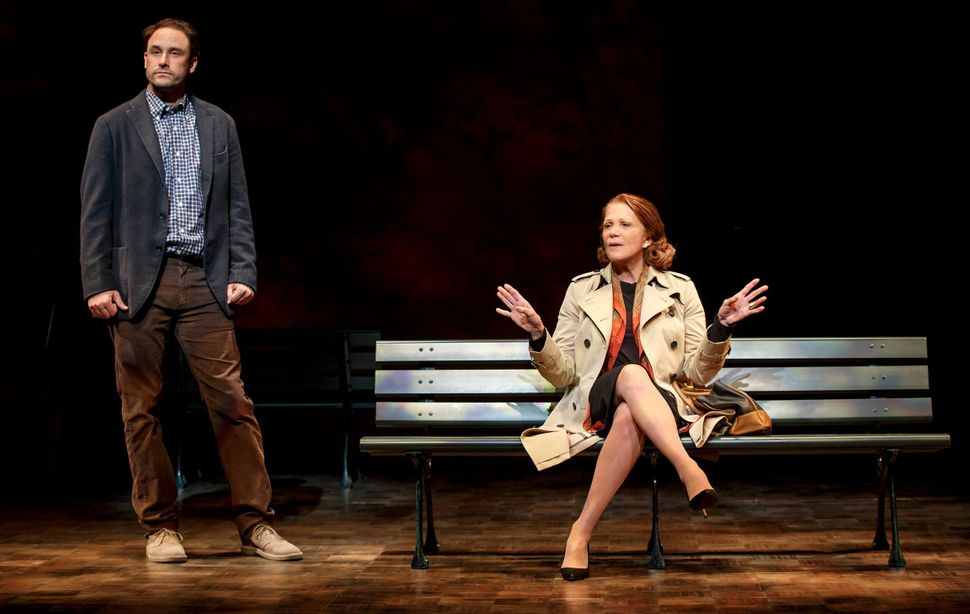 Let us stipulate, to begin, that Linda Lavin is excellent at playing a Jewish mother of a certain age. In fact, she is better than excellent; she is extraordinary, perfect, brilliant, perhaps the ideal, especially when that Jewish mother is wry, self-assured, precise, prickly — and when isn’t a Jewish mother (or at least a theatricalized version of one) wry, self-assured, precise, prickly? “Did I mention my mother was a cold woman?” muses her character’s son in Richard Greenberg’s new play “Our Mother’s Brief Affair.” “Well, warm-cold. Think, I don’t know: Julie Andrews: Tundra or hearth?” Warm-cold Jewish mother? That’s Linda Lavin.

Let us also stipulate that Richard Greenberg is perhaps the ideal playwright to craft smart aphorisms for a put-upon Jewish mother. (Well, with Jon Robin Baitz busy with TV, Nicky Silver not currently produced on a New York stage, and Douglas Carter Beane a Gentile.) In this play’s very first moments, he gives Lavin, as Anna, a Long Island widow who is, slowly, sporadically, dying, a series of near-perfect aphorisms, while Seth, her adult son (played by Greg Kellar), speaking to the audience, tries to explain her:

SETH: Who was she?

ANNA: I love the fall colors.

ANNA: Air-conditioning is the key to civilization.

SETH: She could be intensely absent.

ANNA: The houses in Great Neck with their manicured lawns!

SETH: She was an average situational liar but not at all a maker of fables.

ANNA: I barely bumped the fender, I bet there’s not even a scratch, shut your mouth, and let’s go!

SETH: She asked on her deathbed, on, it turned out, her long series of deathbeds. The heart was no longer charging, the lipstick was.

ANNA: The potato chip is nature’s most perfect food.

We should also grant that Greenberg has created for this play a very specifically suburban Jewish milieu. (Whether this is why it ended up at Manhattan Theatre Club or whether given his long relationship with the company he was writing for his audience is something close to a chicken-or-egg debate.) It even unexpectedly and amusingly evokes as a significant presence and plot point the great boogeyman of liberal-Jewish 20th century consciousness, David Greenglass, who laconically sent his sister, Ethel Rosenberg, to the electric chair.

And we should finally note that Greenberg’s ultimate point here is sweet and somewhat profound, about the everywoman’s desire — anyone’s desire — to, at the end of her life, feel like she was connected to something big and important, that her life at least touched history, if didn’t impact it.

But, still, even with all those things in its favor, we must also acknowledge that in “Our Mother’s Brief Affair” — which opened tonight at MTC’s Samuel J. Friedman Theatre on Broadway — Greenberg has delivered an inert, undramatic, disappointing evening of theater. There are nice performances, and good lines, and some interesting ideas, but somehow they add up to less than the sum of their parts. And director Lynne Meadow, MTC’s artistic director, never finds away to turn this into something more.

A big part of the problem is stylistic. Rather than interact, the characters often talk around each other, as in that opening exchange: Anna having a solo scene while Seth, or, later, his sister, Abby (Kate Arrington), addresses the audience. While all three have the outline of an interesting story, only Anna’s is developed, and they barely intersect. (Seth is an obituary writer, gay and single, which prompts another spot-on Greenberg-for-Lavin line: “If you’re not gonna sleep with anyone anyway, why not be straight? I mean, would it kill you not to sleep with a woman for a change?” Abby is a partnered lesbian, with an infant daughter at home in California.) The direct address from the two children becomes if not quite merciless then at least never close engaging.

It’s why when the David Greenglass revelation appears, near the end of the first act, it’s a gasp-worthy, record-scratch shot from left field. It suggests that what has heretofore been a witty but dull proceeding will gain some life. But it doesn’t; the kids promptly move into a direct-address history lesson on Greenglass, and the other promised revelation from Anna turns out to be barely one.

More than that, the two children are basically ciphers, especially Seth — Greenberg’s stand-in, remarkably enough — who is apparently a perennially alone, though there’s no exploration of why. That he’s become a professional obituary writer is barely examined, too — in a play that is ultimately about death and remembrance.

That, of course, is why he has the job: employment sprung from dramaturgical necessity, not from character or history. Ultimately, it turns out, his mother has been telling him stories in his professional capacity, not in a personal one, because she wants the world to remember her. It’s a valid thought, even in a play that’s mostly forgettable.

Linda Lavin Is the ‘Mother’ of All Jewish Mothers