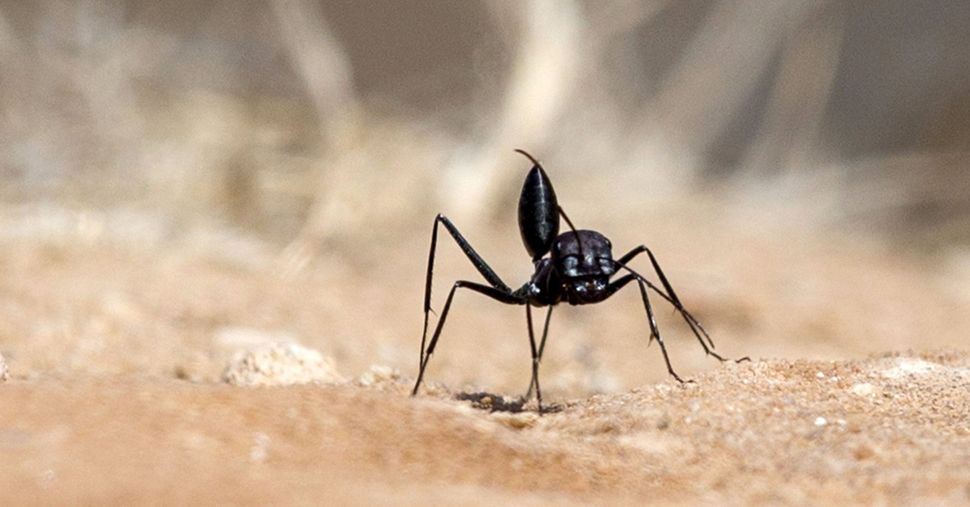 In a series of best-selling novels about ants, miniature human beings and other creatures, the French Jewish author Bernard Werber has won millions of readers worldwide with what he calls philosophy-fiction. Blending science fiction, whodunits, spirituality, biology and mythology, his latest work, “The Sixth Sleep,” was published. Recently, the Forward’s Benjamin Ivry spoke with Werber about the past and his predictions for 2016.

Benjamin Ivry: In 2003 you told Haaretz that “Judaism is in all my books,” citing the legend of King Solomon debating with a queen ant over who is more powerful as inspiration for your “Empire of the Ants.”

Bernard Werber: I seem to recall that King Solomon told the ant, “I will show you the path to wisdom.” I think that the ant was present 120 million years ago, well before mankind, so they may understand many more things than we do.

Your mother, the daughter of a Tel Aviv painter named Stiglitz, was a pianist. Did she arrive in France to study music?

My mother came to France for my father. Friends introduced her to my father, who was an Ashkenazi Jew of Polish origin.

In “We the Gods, you suggest that “children of strict parents are often better brought up than those of lenient parents.” Which kind of parents were your mother and father?

My parents were rather strict when I was small, but as I grew up they became lenient. It was a generational thing: My grandfather was strict with my father, and in turn he was strict with me. I tend to be kinder with my own son.

You have gone on record as being impressed with the spirit of cooperation, rather than competition, found in ants, something akin to what you discovered in 1975 at age 14, when you visited Kibbutz Ramat David in the Galilee. Yet in kibbutzim, rivalries and ambitions exist, don’t they?

I stayed [in Israel] for just three months and only saw the good side, giving the impression of a perfect society, a kind of social ideal I saw nowhere else in the world. The ants are more occupied with collective success than with individual success. It’s an error not to want to be compared to ants, because they are a species who have succeeded.

Isidore Katzenberg is a character in a number of your novels, a reclusive former detective living in a water tower with dolphins for company. What did his Jewish-sounding name add to this character?

In truth, I will tell you why he is called Katzenberg. No one knows this. At a given moment, we were going to make a film in the USA, based on “Empire of the Ants.” The person selling the rights contacted [film producer] Jeffrey Katzenberg of DreamWorks Animation. He told my representatives at Canal+ that he would make a film about ants but would not pay anything for the rights. He launched into production on “Antz.” I thought about suing, but was told that a lawsuit would cost too much. I decided to bestow [Katzenberg’s] name upon the fellow who causes the most trouble to my hero. Besides, I like the name Katzenberg, which means “cat mountain” in German.

Your books are translated into 35 languages, selling more than 20 million copies, but they are especially popular in South Korea and Russia. Why so?

These are countries interested in their future, because they emerged from dictatorships, both of them. South Korea survived military dictatorship and Russia Communist dictatorship, and the new generation is hoping for better times. There is a tradition of French science fiction with Jules Verne, which was well received in Russia and Asia. Jules Verne is still very present in Russia today.

You have spoken about the influence on your work of Isaac Asimov’s “Foundation Trilogy”, yet for Asimov, the future was not always a cheery place. Are you more of an optimist about 2016 and beyond?

I think we are taking three steps ahead and then two steps backward. In history, each time we advanced from barbarianism, we had to take steps back, so I am pessimistic in the short term and optimistic in the long term.

In “The Butterfly of the Stars,” mankind’s destruction of life on Earth may make traveling away from the world the only means of escape. But where to go?

What our ancestors did when Moses led the Jews out of Egypt, or [when] Christopher Columbus brought Europeans to America. At some point, the situation was obstructed and it was necessary to move a great many people to another territory. In the future, this territory may be outside the solar system. It will be Noah’s Ark, but with 140,000 people in it.

In “Les Thanatonautes” you quote an observation attributed to Woody Allen: “As long as man is mortal, he cannot ever be really relaxed.”

It’s a major concern. I understood when watching [Stanley] Kubrick’s “2001: a Space Odyssey,” that we live in permanent fear as a residue of our prehistoric life. Perhaps future man will be freed from that fear. The first characteristic of future man is that he will be far more relaxed. Above all, he will conquer his fear of death. Being relaxed means he will do things as a result of thinking and not in a visceral way. Often politicians or dictators manipulate people by fear. Then humanity works like a herd of sheep who don’t know where they are going, when dogs bark. A writer’s role is to see where the herd is going.

Also in “Thanatonautes” you point out that if someone harms you and you save his life, his hatred will only increase: “Yet we must love our enemies, if only because it makes them lose their composure.” So what the Talmud says about helping our enemies or converting them into friends is impossible?

I am not a partisan of yes or no, of what is impossible or not. But ingratitude is a great law of humanity. In many cultures, kindness is seen as a form of weakness. There is more respect for a person who inspires fear than for kindness. I am not a mystic or philosopher, just someone who reads the newspaper and tries to understand what is happening in the world.

In “The Tree of Possibilities,” you mention a Chinese proverb, “When the wise man points at the moon, the fool looks at his finger.” If the onlooker is an orthopedic surgeon, he is no fool, so focus of attention depends on personal interests, doesn’t it?

What I meant is that generally there is a lack of perspective. “Empire of the Ants” was an attempt to give perspective to people, by seeing the world from an infinitely small perspective. In “Our Friends the Humans” the plan was to show the world from an infinitely distant point. To understand the system, we must extract ourselves from it. That sums up my entire approach. If we always think the same way, we will remain with the same results. We must move on to a higher level.

In “We, the Gods,” you write, “Kindly leave this humanity as clean upon dying as you would wish to find it after rebirth,” a take-off on the familiar sign “Please leave these toilets in the condition you would like to find them.” Does that make human life a kind of restroom?

No, no, no, no. I believe that we are spirits incarnated in matter. Matter is a very powerful level of energy. We don’t understand this matter, and some people abuse it. If reincarnation exists, they might return to a world where they will have to pay for the way they treated things. Jewish tradition speaks of gilgul the Kabbalistic concept of reincarnation, or the spiral in which we are here to learn and improve things. What I appreciate about the Kabbalah is the Tree of Life, wherein the soul perfects itself. The idea that if one behaves righteously, the world will become better. At times the soul must learn from suffering, which is too bad, since I think we can also learn by intelligence. I am fundamentally optimistic. The Hebrew people have survived through centuries when Greek, Roman and Egyptian civilizations disappeared. That’s because inside the very teachings of this [Jewish] tradition is a scientific power. For example, in the Jewish religion, what amazed me was the idea of the breaking of a pattern. Shabbat means that every other day we do the same thing, but on this day we do something else. The Hebrews were the first to understand that leaving land fallow part of the time was necessary, rather than trying to make land productive without ever stopping. That’s scientific.