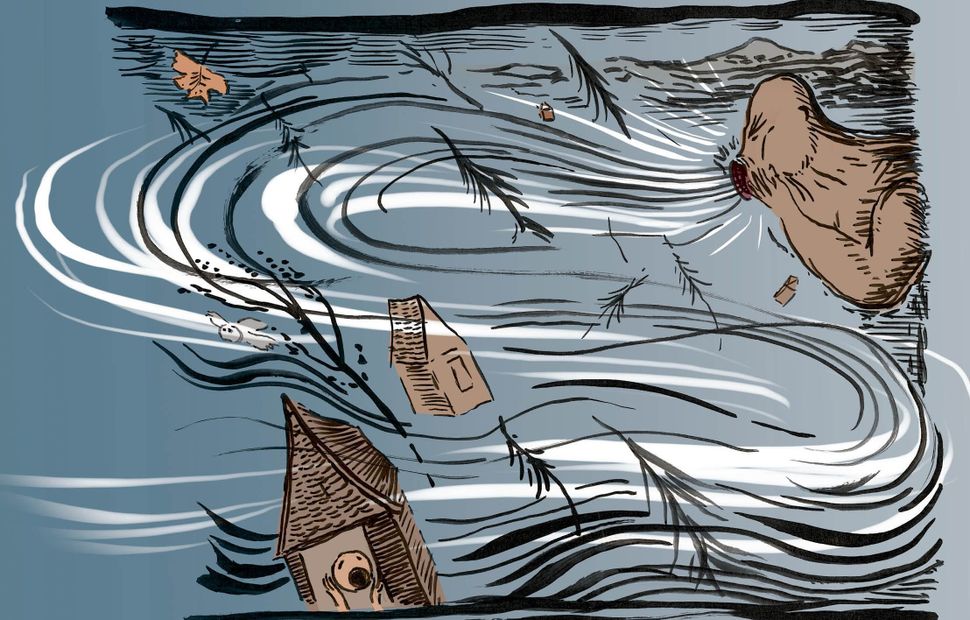 In the 1921 Yiddish children’s book “The Wind That Got Angry,” by Moyshe Kulbak, an “old, wandering wind” finds himself booted out of his village when a thaw sets in. He tries to find somewhere in the woods to rest. He’s tired and wants to sleep, but no one wants him around. The oak tree he settles on kicks him away, so he finds a rock to lie on. The rock calls him a tramp. He finds a cozy hotel, but the innkeeper curses after him for peeping into the doorway.

His frustration builds, until finally “he stood up, like a strongman, in the middle of a field, rolled up his sleeves, girded his loins and began to blow with all his might.” The wind begins to “cry like a child.” The blizzard he whips up causes such a frenzy that “even the rich people didn’t know what to do.”

Then the wind hears small children wailing to their mother out of fear, and he chokes up. Their mother calls out to the wind to stop crying, but the wind throws a pile of snow at her face. She asks him to stop again, this time for the sake of the children, and he immediately quiets down.

When Miriam Udel, a professor of Yiddish language, literature and culture at Emory University, stumbled upon “The Wind That Got Angry” at the New York Public Library, she noticed the microfiche stamp was dated a few months before her birthday, in 1976. Before she even delved in, she felt it was a sign, like the book had been waiting there for her. And it turned out that even as an adult, she related emotionally to the story.

She has two boys, ages 11 and 8, and a newborn baby, and felt the pain of this mother.

“I’ve always said that tantrums are like weather systems,” she said. “They’re largely out of control, and you wait until it’s over, and then the sun comes out.”

“The Wind That Got Angry” is one of the translations Udel is including in her upcoming anthology, “Honey on the Page: An Annotated Anthology of Yiddish Children’s Literature,” to be published by NYU Press in 2018.

“It’s an understudied field,” she said about Yiddish children’s literature, adding that in order to examine it, “we have to be children again and we have to gain fluency.”

Udel and two colleagues, Marshall Duke and Melvin Konner, received the 2015 Interdisciplinary Faculty Fellowship at Emory University to tackle, learn and analyze the history of children’s books printed in Yiddish from 1912 to 1974, with the bulk of the studies focusing on the interwar period.

They just finished the first semester of their three-year study, which began with trying to grasp the basic traditions of Yiddish children’s literature. Udel compiled an email list and flagged down people in the hallways to recruit a small group of faculty, graduate students and anyone else to read selected stories and articles, and to have a discussion every other week.

“I feel energized,” Udel said. “There was not a boring week, even when people came in and felt the literature they read wasn’t the most stimulating.” Now she is gearing up to begin the second portion of the scholarship: a comparative look at the works across Europe. Eventually there could be a documentary.

Yiddish children’s literature first appeared in the later part of the 19th century. Many point to Sholem Alecheim’s “The Pocketknife” from 1887, about a boy who suffers guilt after stealing a pocketknife, though Sholem Alecheim didn’t originally write it for children. The industry, however, didn’t begin to thrive until the 1920s and ’30s in both Europe and America, mainly due to a rise of secular Jewish schools questioning traditional thought. The end of World War I led to the displacement of children, and therefore to an urgency to provide them with educational materials.Furthermore, the rise of children’s literature is attributed to a change in how society viewed and treated children, specifically developing the notion that there is such a thing as a “childhood.” According to Gennady Estraikh, Kerstin Hoge, and Mikhail Krutikov, the editors of a forthcoming anthology titled “Children and Yiddish Literature From Early Modernity to Post-Modernity,” due for publication by Legenda in February, society “ignored children’s interests, abilities and environment, and, like the community as a whole, had no conception of children as essentially different from adults.” By the time the ’20s and ’30s came along, Yiddish books, poetry and periodicals for children could be found in Poland, Russia, the United States and Latin America. 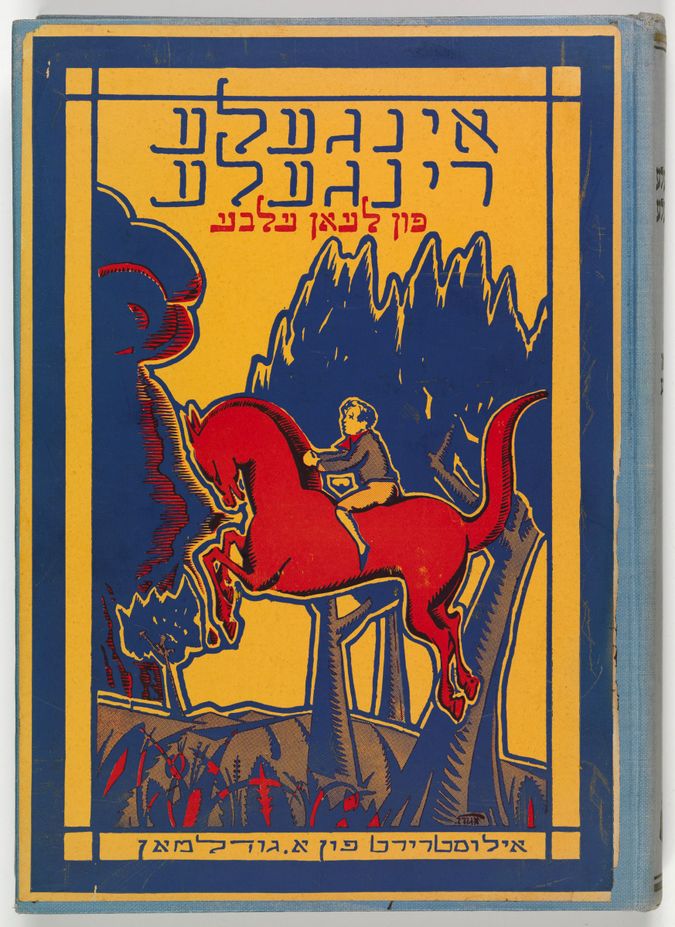 The largest chunk of material in Udel’s anthology will be these types of works from the ‘20s and ‘30s.

One she’s including, which happens to be her second favorite book after “The Wind That Got Angry” is “A Sabbath in the Forest” by Jacob Fichman. It’s about a poor tailor named Lipe who leaves his village every day to mend and stitch clothes for Christian clients. He always comes home early on Friday for the Sabbath, and in fact becomes giddy at the thought of returning home to a hot meal.

Fichman writes that Lipe “had only to remind himself of home, where his wife Nechama had probably already put up the cholent, the Sabbath stew, and bathed the children, where every corner sang with cleanliness and warmth, and his heart quickly turned joyful and his footsteps lightened. He already felt the pleasure of Shabbos and the joy of fulfilling God’s commandment.”

In “A Sabbath” one Friday, when Lipe the tailor is out working, a dreadful snowstorm threatens to detain him. Lipe determinedly sets out anyway, with the faith of God’s good intentions encouraging him.

He plunges deeper into the forest, and just as it looks like he might not make it, a marble palace burning the Sabbath candles materializes and the voices of the Elders beckon him inside. He happens upon warmth, food, wine, diamonds and other treasures. He enjoys an extravagant Sabbath like none other. When the blizzard subsides, he makes his way home, where no one questions his disappearance, but the narrator says, “He only regretted that it had been without his wife Nechama and his children, whose Sabbath had surely been marred by his absence.”

Udel explained that these messages of religious dedication and images of nature paired with sensationalized diction were meant to “create nostalgia and the warm fuzzies for Judaism,” meaning a sentimentality for the tradition and rituals.

It wasn’t uncommon for children’s literature at this time to plant ideas. “Whose Girl Is This?” a Yiddish story that takes place in the Soviet Union,“is a story that experts in Yiddish children’s literature cite frequently when talking about Communist propaganda. It follows a little girl who loses her mother in a train station. She feels panicked and frightened — that is, until a poster of Stalin appears before her, and once again she feels safe.

“Hitler wipes out most of this literature in one fell swoop,” Udel said. There was still a desire to preserve these works, but in the following decades, the books began to decline in secular communities. The latest work Udel is publishing is from 1974. Now, the vast majority of Yiddish children’s literature can be found only in Hasidic communities.

Today, scholars divide Yiddish children’s literature as either Hasidic or not, and all agree that hardly any original works are being created for non-Orthodox Jewish children.

“Outside, the numbers are much smaller and not growing at the rate the Hasid communities are,” said Asya Vaisman Schulman, director of the Yiddish Language Institute at the Yiddish Book Center, about native and household Yiddish speakers. Most of the secular works are translations of well-known stories.

Zackary Sholem Berger, who along with his wife has published Yiddish translations of “The Cat in the Hat,” “One Fish Two Fish Red Fish Blue Fish” and “Curious George,” acknowledged that it’s difficult to find children’s literature in secular communities. “The range is more limited,” he said.

Even though Yiddish children’s literature remains a mostly untouched and unknown area, to Udel these stories are as precious as the children who once read them. With this project, she’s hoping to remind people of its existence.

“When you see other people recognize it as a treasure,” she said of these works, “that feels really good.”