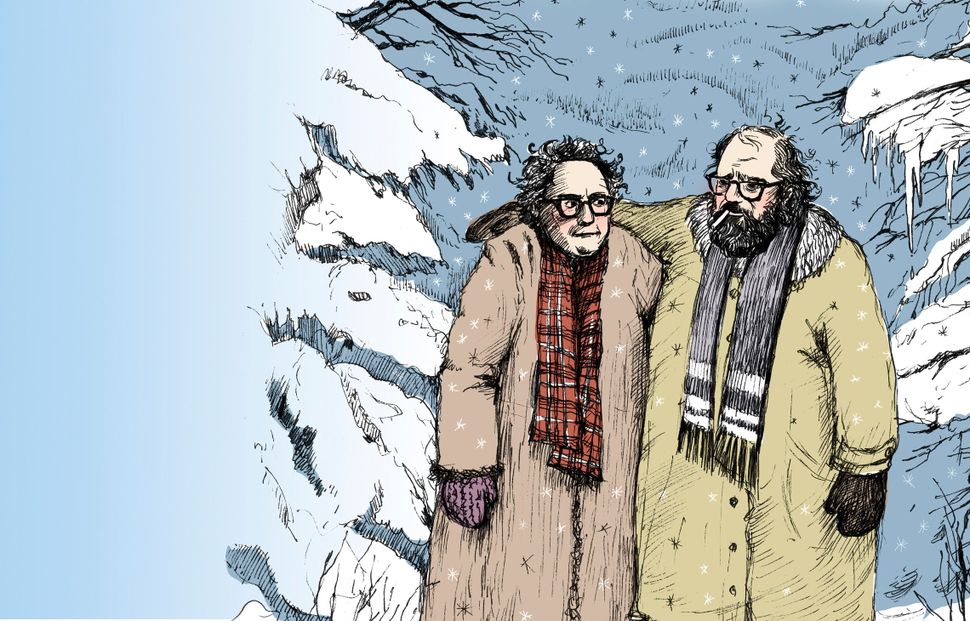 Last June, while digging through 50 boxes of archival material about Bernie Sanders’s four terms as the mayor of Burlington, Vermont, a reporter for the British newspaper the Guardian found a poem by Allen Ginsberg. Written by hand on a 1986 visit to the city, “Burlington Snow” didn’t name Sanders, but he was clearly the populist muse that inspired it.

After Ginsberg shares the city’s governing idea, the poem itself is shared: “Isn’t this poem socialist? It doesn’t belong to me anymore.”

The iconic Jewish-American poet was writing about the Jewish-American socialist almost exactly 30 years ago, on a February day in snow-covered New England like the one on which Sanders won in New Hampshire. Spreading online, the poem has delighted both poetry people and Sanders loyalists. No one combines those two groups like Eliot Katz; a leading “post-Beat” poet and Ginsberg protégé, Katz has spent 20 years, on and off, working on a book caled “The Poetry and Politics of Allen Ginsberg.” Published by the independent Beatdom Books in December 2015, it addresses both Ginsberg’s career as a poet and life as an activist.

Absurdly, the unearthing of the Sanders poem from an overlooked archive came after Katz’s manuscript was ready for print, too late for him to write about it. But it reflects his thesis about Ginsberg and his pleasure in Sanders’s success. Katz has written seven books of poetry, including “Space and Other Poems for Love, Laughs and Social Transformation” (1990) and “Unlocking the Exits” (1999), but I hadn’t heard of him in 2005, when an editor at the San Francisco Chronicle asked me to review a collection of essays about “Howl.” I pretty much panned it, saying too many pieces presented facile claims by Ginsberg admirers about his relevance in the 21st century.

Katz, whose readable book expands on his insightful essay, says Ginsberg’s forward looking focus defines how he “challenged the boundaries” of poetry’s political potential. After years of digging into “Howl,” “Kaddish” and “Wichita Vortex Sutra, he was startled a few weeks ago when he found “Burlington Snow” online, recognizing a vivid example of how a Ginsberg poem could illuminate political changes long before they happen.

“Ginsberg told me that prophetic poetry doesn’t work like someone making a prediction,” Katz said when I visited him in his Hoboken apartment. “Instead, he would say that political poetry ‘touches a common key,’ allowing the reader to feel something that somebody will feel in a hundred years. Here, he wrote a poem that praised the democratic-left tradition we’re seeing in Bernie Sanders. No one could have predicted that Sanders would be waging such an effective campaign to move the Democratic Party in more progressive directions.”

A frequently smiling man with shaggy, graying hair, the 59-year-old Katz lives amid countless books on Ginsberg and progressive politics. Taped to one wall is a newspaper clipping about his late mother, Toby Katz, an Auschwitz survivor who went on to hold elected office for 12 years as a councilwoman in West Orange, New Jersey, where Katz grew up. She helped to inspire his work as an activist, including jobs with organizations for the homeless in New Jersey and Washington, DC. He displays posters of readings he gave with Ginsberg, and his book combines his personal feeling for the poet with critical analysis of his work.

Of a poem called “Why I Sit,” Katz writes that Ginsberg used a technique learned from Greek poetry called anaphoric repetition, the rhythmic echoing of a word to “sew together” his personal and political concerns. He quotes from the poem:

“Why I Sit,” Katz writes, highlights how “Stalin’s deplorable actions caused [Ginsberg] to become a citizen without solidly existing roots.” Katz said the poet’s attraction to socialism transcended his disillusionment with Soviet communism, and that ”Burlington Snow” reflects his lifelong contemplation of counter-pulling influences of his youth, his troubled communist mother and his socialist poet father. “Allen appreciated democratic socialism,” Katz told me, when we spoke. “But he opposed the kind of authoritarianism of the Soviet Bloc. Czechoslovakia is a country he got kicked out of.”

“I don’t call Allen a democratic socialist in the book,” he added. “I think he believed more in being politically pragmatic than in holding any specific ideology — so that he supported anarchist movements when they were doing positive things, and trade union movements when he agreed with them. He remained a progressive his whole life, and he defied the conservative myth that radicals from the 1960s era all became conservative in their old age.”

Ginsberg’s “open support of Sanders,” Katz said, prompted him to give a reading to raise money for one of the Vermont politician’s congressional races in 1992. In fact, in a lengthy footnote, Katz says he helped to organize it. “It was at a restaurant called Nadine’s,” Katz told me. “I always thought I introduced them for the first time. Allen and Bernie talked, but I don’t know what they said, because I was too busy helping to coordinate things.”

Bob Rosenthal, longtime manager of Ginsberg’s office, says Ginsberg had Bernie Sanders on his radar through the years. “I always knew who Bernie Sanders was, and I had to know that through Allen, because Allen was where I got all my news,” Rosenthal told me. “I don’t think they hung out together, but Allen always had an awareness of him.”

The Allen Ginsberg archive at Stanford University holds a letter Sanders sent Ginsberg in 1989, thanking him for the “time, energy and creativity” Ginsberg gave “to me and the City of Burlington throughout my administration,” citing an art auction with which Ginsberg helped in some unspecified way.

With the resurrection of “Burlington Snow,” Ginsberg’s friends wonder if the poet and the politician actually met for the first time when Ginsberg visited Burlington in 1986.

Huck Gutman is pretty sure that didn’t happen, and he should know. Gutman is one of Bernie Sanders’s closest friends, serving for years as his chief of staff in Washington. He’s also a professor of English at the University of Vermont, where he often teaches “Howl,” and he spent recent days getting ready to give a class on how the Russian poet Vladimir Mayakovsky influenced Ginsberg.

Asked about “Burlington Snow,” he replied in an email: “Ginsberg, as you know, grew up in a socialist milieu (I guess I am clear about this mostly from his poem, ‘America.’) and would have been interested in, even entranced by, the fact that Burlington had a socialist as its mayor.”

Still, he wrote, “I do not think Allen and Bernie met at that time. That they might have met at a NYC fundraiser years later — in 1992 he was running for his second term in the US Congress — could certainly be possible.”

In a telephone interview, Gutman said he himself spent memorable time at the university talking with Ginsberg about poetry during the 1986 visit. Gutman didn’t attend the bookstore reading but heard that the poet wrote the poem (with 14 lines, it is an informal sonnet) “quickly,” and immediately read it to an audience. Did Sanders ever see it? Gutman didn’t know, but said Bernie Sanders generally doesn’t read poetry: “He reads biography, history, novels — not poetry.”

Based on his observations of Ginsberg and Sanders, though, he says they share a lot.

“Ginsberg was writing in a way that a lot of people were not writing, and he had to believe in his own vision and his own voice,” he said. “I think Bernie has that. He understands that the test of what one says is not the political pundits and the political base — not what the critics and professors said, in Ginsberg’s case — but whether one speaks one’s own way and in a language that reaches people.”

Recently, Grove Press published “Wait Till I’m Dead,” a new gathering of Ginsberg’s uncollected poems. It doesn’t include “Burlington Snow.” Bill Morgan, a Ginsberg biographer and archivist of his papers, edited the volume and says the poem “came too late,” explaining that “Grove had the (finished) book for about a year.” Morgan, who lives in Vermont and “would vote for Sanders for anything,” says he believes the poem “wasn’t strong enough” to make it into the book.

Morgan worries that the poem’s visibility could hurt Sanders, though he said that isn’t why it got left out. “I worry that people will see that line — ‘It doesn’t belong to me anymore’ — and will read that to mean, ‘I have to give up something,’ the second car or something, that Bernie wants to take their possessions away.”

Eliot Katz believes that the way Ginsberg animates socialism as a form of sharing in “Burlington Snow” could have a positive effect. “I think it can help educate younger voters that democratic socialism, as Sanders practices it, is a form of inclusiveness, of expanding democratic rights, not taking them away, which would be the view of an older generation raised in the Cold War. Everything in the poem is shared — even the environment, something Sanders talks about a lot — and that message can only be helpful.”