When Bernie Sanders Walked Out of Allen Ginsberg’s Poetry Reading 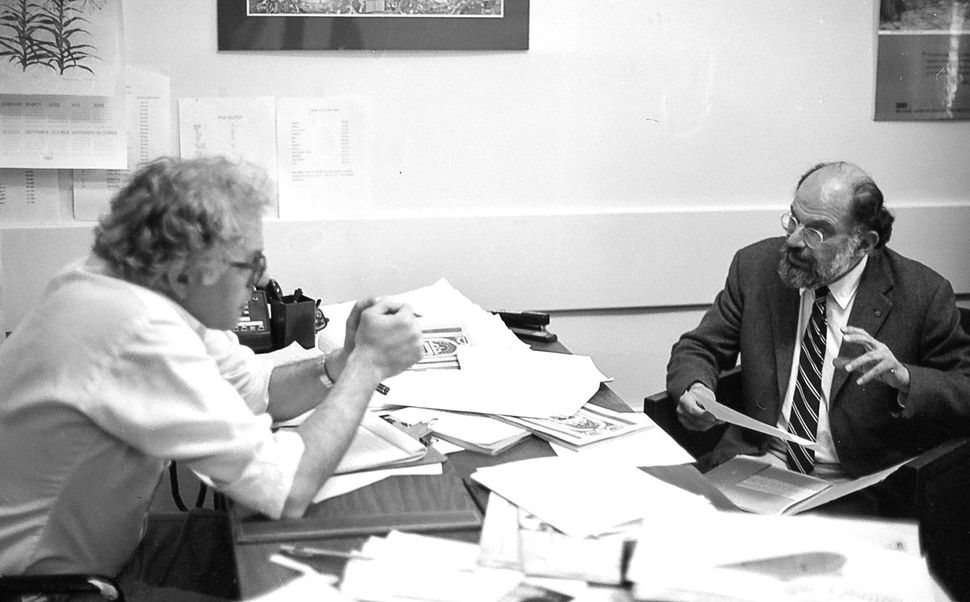 When did Allen Ginsberg and Bernie Sanders first meet? What were the circumstances? Even people close to Sanders and Ginsberg do not agree on that history, explored in a recent piece in the Forward. But a photo that surfaced after the story went to press shows the poet, whose outlook reflected socialist ideas and the socialist mayor of Burlington, Vermont together in Sanders’s office.

The 1983 photo, which prompts new questions about meetings between the two men, was taken by Phyllis Segura, at the time a freelance photographer on assignment for Yoga Journal. She was following Ginsberg and others with him on a tour of Vermont, reading poetry and singing. The image shows an intense-looking Sanders and a more relaxed (and more formally dressed) Ginsberg engaged in what seems like serious talk across Sanders’s desk. What has them so engaged? “I don’t recall what they were talking about,” Segura told the Forward, from her home in upstate New York. “I wish I could remember what they talked about. Another person who I think was in the room at the time was Steven Taylor, a musician who played with Allen.”

Steven X. Taylor traveled extensively with Ginsberg between 1976 and 1996, a guitarist and multifaceted musical collaborator. Reached in Brooklyn, he said he remembered the encounter, says it was a “very pleasant, cordial” discussion, but the years have eclipsed just what was said. Then, Taylor recalled a public incident between Sanders and Ginsberg that seems like it was not particularly pleasant for Sanders, as Taylor describes it. He says it may have happened on the 1983 tour, but isn’t sure, and Phyllis Segura says she’s certain it did not, “because I went where Allen went on that tour and I never experienced that.” 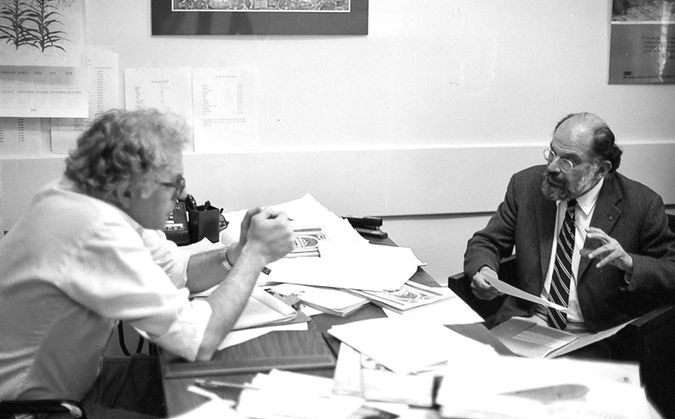 Taylor said that on one visit to Burlington, Sanders introduced Ginsberg at the start of a reading-performance for which Taylor was on stage with his guitar. “What happened was we gave a show in some big municipal building…and Bernie got up and introduced Allen.” Sanders, he said, sat down in the front row. “Bernie was proud to present Allen. And Allen was then in the habit, if he had a new poem, he’d try it out on people…and he had a very graphic poem about anal sex. He had this kind of dirty streak, and he liked to talk dirty in public. It was partly gay activism and it was also something he did.”

The poem was called, “What You Up To?” and it appears in the final edition of Ginsberg’s “Collected Poems.” Sanders, Taylor said, “stood up” from his seat as Ginsberg read, “turned and walked out. You know I thought (at the time), ‘What a nightmare for a politician.’ I thought, ‘Oh, God, he’s a socialist. Already he’s got problems. But now he’s got Allen up here reading about anal sex.’ It was not a good thing for Allen to do. He should not have done it. He should have been more careful, but he got excited. He got excited when he performed, and he was a great performer…”

I told Taylor that, in the 1983 photo, Sanders looks more like a poet and Ginsberg — the poet famous for explosive poetry so conventionally well-dressed in tie and jacket — looks like the small city mayor.

The Sanders campaign hasn’t responded to requests for comment about the photograph or the reading incident. Ginsberg and Sanders — two iconoclasts — had a few contacts over the years. The poet’s visits to Burlington included one in 1986, when he wrote a poem called, “Burlington Snow,” which clearly pays homage to the virtues he finds in the socialist values with which Sanders governed Burlington. Ginsberg gave a reading of the poem in a local bookstore. The poet traveled quite often to Vermont to spend time with his Buddhist teacher, Chogyam Trungpa, at a Buddhist center about an hour from Burlington. Segura took other photos of him there and elsewhere on his 1983 tour. She knew Ginsberg going back to the 1970s, having been introduced to him by the poet Gregory Corso. At 72, she says that Bernie Sanders’s recent surge of public visibility sent her back to her files, where she had an image of a poet and a politician that she realized had the new context of a presidential campaign.

When Bernie Sanders Walked Out of Allen Ginsberg’s Poetry Reading