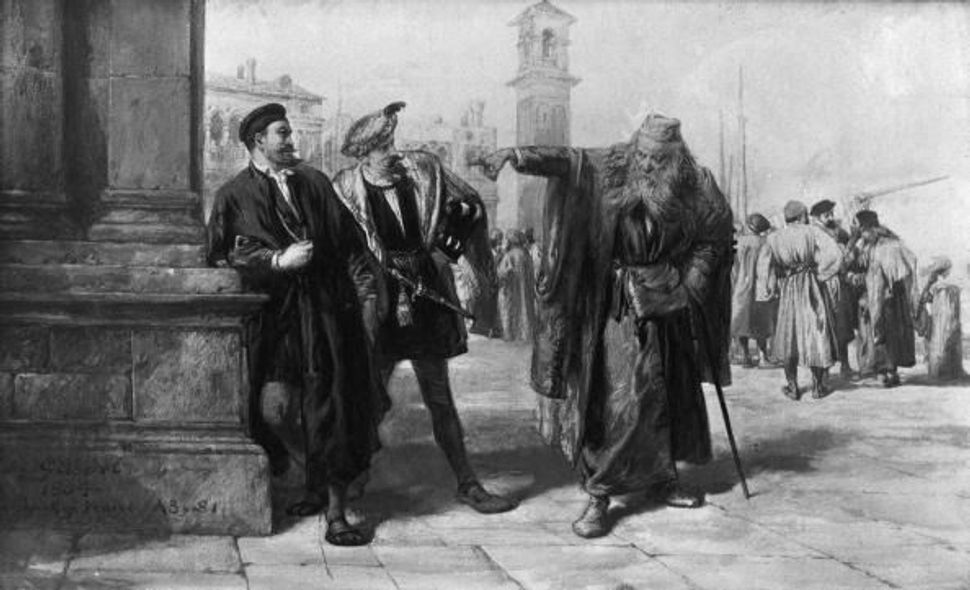 Shylock Is My Name
By Howard Jacobson
Hogarth Shakespeare, 288 pages, $25

What to do with Shylock? I was pondering this question recently while browsing in a Barnes and Noble, when I noticed that they’d helpfully labeled the Humor shelf, “Books that make you laugh.”

Especially with regard to some of them (“What Would Jesus Craft?” comes to mind), the tone of this signage felt somewhat like Samuel Johnson’s assessment of second marriages — “The triumph of hope over experience.”

I would, however, have been happy to see them attempt a pithy description of how consumers might be affected by other genres. “Philosophy: Books that make you think about thinking” or perhaps “Test Prep: Books that make you rich, eventually.” And what do they think happens as a result of reading the books they call “Fiction/Literature”? For it is into that category — or categories — that Howard Jacobson’s new book “Shylock Is My Name” clearly falls.

Bookstores like to use this “Fiction/Literature” combination to portray themselves as both guardians of ancient wisdom and purveyors of the finest contemporary storytelling. They are also signaling to consumers that whatever they don’t like might well be antique (thus dull or classic) or contemporary (thus cutting edge or experimental) without having to commit to which books might fall into which category.

The signs seem to mean something like “These shelves contain mostly non-true stories (hence fiction), that are anywhere on the Horatian spectrum of “delight and instruct.” But these store-owners aren’t going to say what they actually think is delightful.

So where on the Horatian spectrum does Howard Jacobson’s “Shylock” fall? It’s a contemporary novel set in the north of England, but explicitly and deliberately using many themes, plot and characters of Shakespeare’s “The Merchant of Venice.” Is it literature or fiction?

Or is it halfway over to the Humor shelf, in a little understood section called Comedy? (“Books with a happy ending that enact serious, if absurdly framed, social struggles.”) 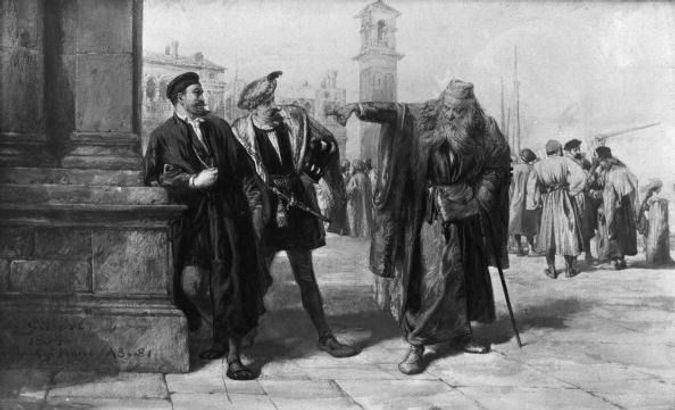 The Man Booker prize-winning novelist’s new book is part of the current Hogarth Shakespeare project. It’s a fiction/literature series which aims to have the bard’s “works retold by acclaimed and bestselling novelists of today.” (Margaret Atwood does “The Tempest” and Edward St. Aubyn “King Lear,” for example.)

Although set in the southern suburbs of contemporary Manchester, Jacobson’s novel features as a character the literary historical 400 year old Shylock from “The Merchant of Venice.” Simon Strulovitch, the ostensible protagonist of the book, takes him in and is, structurally, his contemporary analogue. That is to say, Strulovitch is today’s wealthy Jewish merchant who has lost his wife, is in danger of losing his daughter and when derided by surrounding gentiles, demands a “pound of flesh” that is his by contractual right.

It’s a funny premise. Sometimes it’s haha funny, but mostly it’s just peculiar having the actual Shylock around the Cheshire mansion where a Shakespearean tragedy is being played out as comedy. The enigmatic, uncanny presence of the Venetian allows Strulovitch to ask him questions about what happened in Venice centuries ago while acting out his own drama.

Underneath the parallels though, the question is: “Are we Jews all the same?” With a shadow implication that, even if we’re not, “they” always think we are.

There are great works of art that can be appreciated by the beginner but there are tastes that require honing. A neophyte wouldn’t expect to be able to appreciate the difference between a two buck chuck and a $50 Barolo or a $500 bottle of Chateau Petrus. Which doesn’t mean there aren’t wonders in each category, just that commercial skill (fiction or grape vending) shouldn’t be confused with viticultural or literary skill.

This novel is a Barolo, not a Petrus. It’s not unapproachable, it’s not amazing, but it is delicious and it rewards knowledge and, indeed, discrimination. The reader benefits from knowing Shakespeare and delighting in language; we enjoy the read not least through the insights we generate about Shylock and the suspense about whether Strulovitch will suffer the same losses that Shylock did.

Jacobson is one of our finest writers, but his novels are uneven. It is widely acknowledged that, ironically, his award-winning “The Finkler Question” was one of his weaker recent efforts but “Shylock Is My Name” is a return to form. As with other successful works of literature, it manages to dramatize specific questions whose answers are crucial to the plot, but which have broader and more enduring ramifications.

In this novel the live questions are: How does Strulovitch deal with his daughter Beatrice? How do fathers relate to their daughters? (“If Ivanka weren’t my daughter, perhaps I’d be dating her.”) What is the pound of flesh that the merchants require of their non-Jewish contractees? Or more generally, what do the spirit and enforcement of the rules of law say about society? (Have you taken your affluenza shot this winter?) What marks Shylock or Strulovitch as Jewish for themselves or to those around them? How is “otherness” understood and stigmatized? (Syrian or Mexican immigration anyone?)

Without spoiling the novel, it addresses those questions with a sharp knife: treating circumcision as the quintessential mark of tribalism, the price of a daughter’s hand and also the contractual obligation — yes, it’s the pudenda of flesh. Jacobson’s story of two Jewish merchants shows what happens when celebrity, commodity and universal law clash with the social particularities of ethnic and tribal affiliation.

The daughters of Shylock and Strulovitch and how these fathers view them, lie (though all but silently) at the heart of the novel. In “Merchant,” Jessica runs off with Lorenzo, applying the coup de grace to the already reeling Shylock. In “Shylock,” Beatrice Strulovitch also runs off, in her case with the slightly dim, though fashionably provocative, professional soccer player Gratan Howsome. Though she might return — this is comedy rather than tragedy.

From the narrative point of view, the narrator constantly, constructively fudges the distinction between the two families. “All Jews are the same” goes the undercurrent, they just want to project their pettiness and then steal from us. The narrator is here ostensibly explaining how Strulovitch feels about Beatrice, but Shylock’s Jessica is equally implicated.

She was worth turning, that was what it came to. The histories of terrorism and brigandage, of revolution and sedition, bulged with the apostate daughters of rich men with unacceptable convictions. A girl who would sleep with her father’s enemies was of a succulence beyond description, plunder that exceeded in value even Simon Strulovitch’s rubies and turquoises.

Strulovitch and Shylock are quite different in character: how they look, what they wear and how they act. And, of course we civilized readers don’t believe that all Jews are atavistically the same. But there’s an inescapable narrative drumbeat stressing their similarities: “Strulovitch resembled Shylock in another way as well. He, too, was denied the opportunity to raise the matter with the girl’s mother.”

Shylock’s situation clearly parallels Strulovitch’s. Strulovitch’s wife is a mute paralyzed invalid, Shylock’s wife Leah is actually dead but both husbands spend time talking to both wives. Never have Jewish husbands shared so much, so freely with their wives, without a peep of response.

Anyone who reads Jacobson’s stylish novels or newspaper columns regularly knows that there isn’t much difference between the narrative tone of the book and Jacobson’s regular voice: the construction of his sentences, the sly drift of perspective, the intellectual fascination of the dialogue. It requires that the reader participate in the debates it stages. It’s a fair criticism of the book that there isn’t a whole lot of daylight between Shylock, Strulovitch and the narrator. But isn’t that a literary, teasing, provocative point of this comedy? That all Jewish men are the same in the eyes of the world.

“They used to spit on me, now they tell me Jewish jokes.” Shylock tells Strulovitch. He continues later, “When you walk into a room, Moses walks in behind you.”

To which Strulovitch retorts, “I have a degree from one of the oldest and finest English universities… When I walk into a room bishops and Lord Chancellors walk in before me.”

Shylock dismisses this, saying, “In your head, perhaps. But not in theirs.”