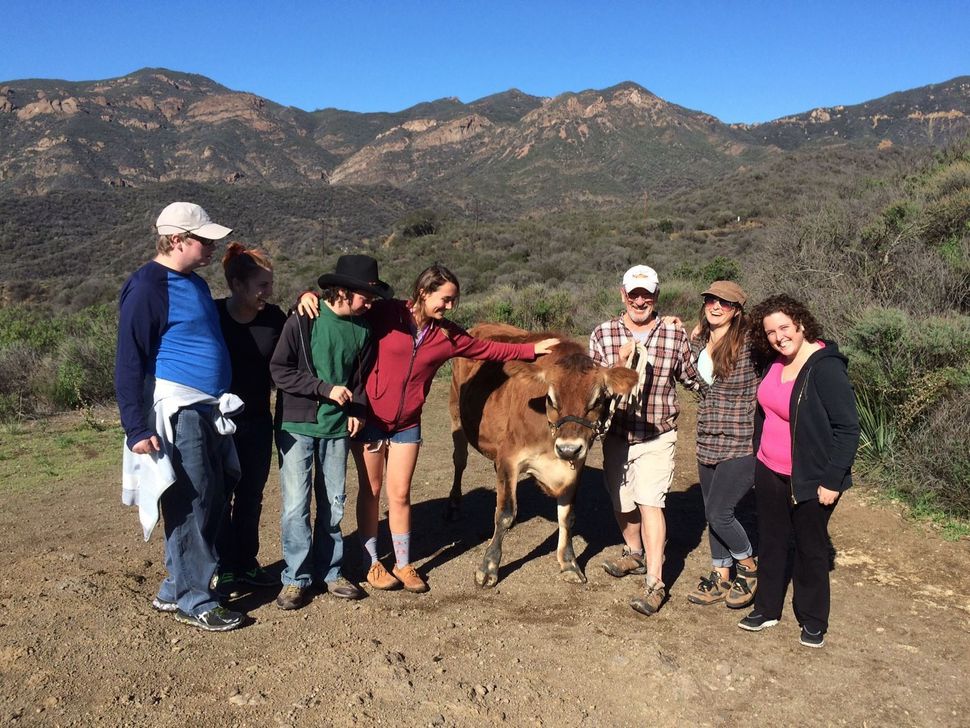 Image by Courtesy of Shalom Institute

For many developmentally disabled children and their parents, the future looks bleak. Getting a job, living a fulfilling life and being independent often seem, at best, like vague ideas on the far side of a wilderness of anxiety and hardship.

But for a cohort of 25 “fellows” at a Malibu farm, the reality is now quite different. Brittanie Sanders, a 26-year-old with autism and special needs, for example, had been left sitting at home once her school support had ended. But now she has a sense of how she might have a career in marketing, born of her experience selling farm products in the fellow program.

Inspired by a 2012 visit to Harduf, an organic farm 15 miles east of Haifa, and Kishorit, a center for adults with special needs in the Western Galilee, the Shalom Institute’s executive director, Bill Kaplan, and his team at Malibu’s Shemesh Organic Farm began a program to incorporate “young adults with different abilities” into their workforce in a purposeful way.

Starting with a pilot group of five fellows in September 2014, Shemesh Enterprises used a seed grant from the Jewish Federation of Los Angeles, where one of the pillars is “caring for Jews in need” to build local partnerships to help realize the program. The most notable of these relationships has been with Creative Steps — an organization that helps “individuals achieve their full potential as contributing, valued members of their community. ” Practically, this means it can help provide the fellows with specialized support and caregivers while they are at the farm.

The program quickly proved its worth and — with a $200,000 grant from the Cutting Edge program of the Jewish Community Foundation of Los Angeles — it has expanded rapidly, doubling to 10 from five in the fall of 2015, and more than doubling to 25 this past January. Fellows have a wide variety of abilities and impairments, more or less physically, verbally or socially adept but work is found at the level of each. The partnerships have worked well, and according to Kaplan, the enthusiasm of the participants has been infectious. “The impact has been amazing,” he said, and everyone loves working with the fellows.”

The kernel of the idea came when, escaping their day-to-day worries, a group of moms and their children went to the farm on Sunday afternoons to picnic, look around and hang out. The farm was happy to accommodate them, but the connection was loose and informal. One of these “Malibu Moms,” Judy Mark, heard about the federation trip to Israel and worked to get Kaplan onto that trip. Another of the “moms” cemented the Creative Steps partnership and, four years on, the program is up and running, and running fast.

The idea is to keep the program sustainable, with money coming from a variety of sources: government and community grants, individual donors and, most important, Kaplan says, earned revenue. The more money that can come in through services like education, or goods like the farm and bakery produce they sell at increasing numbers of farm stands in the area, the more fellows they can hire.

Though not many are full time, fellows work in their areas one, two or three days a week. “Brittanie likes marketing, and Patrick is better at selling at farmers markets,” Kaplan told me. “Neither of them wants to do irrigation, so other fellows do that. But we don’t send them away when they are ‘done,’ these are their jobs.”

“But we do lose some. Brittanie’s just told us she’s going to work in a chocolate and gelato shop. We can’t compete with that!”

This article was updated on March 11, 2016, to reflect 2015 funding by the Jewish Community Foundation of Los Angeles.