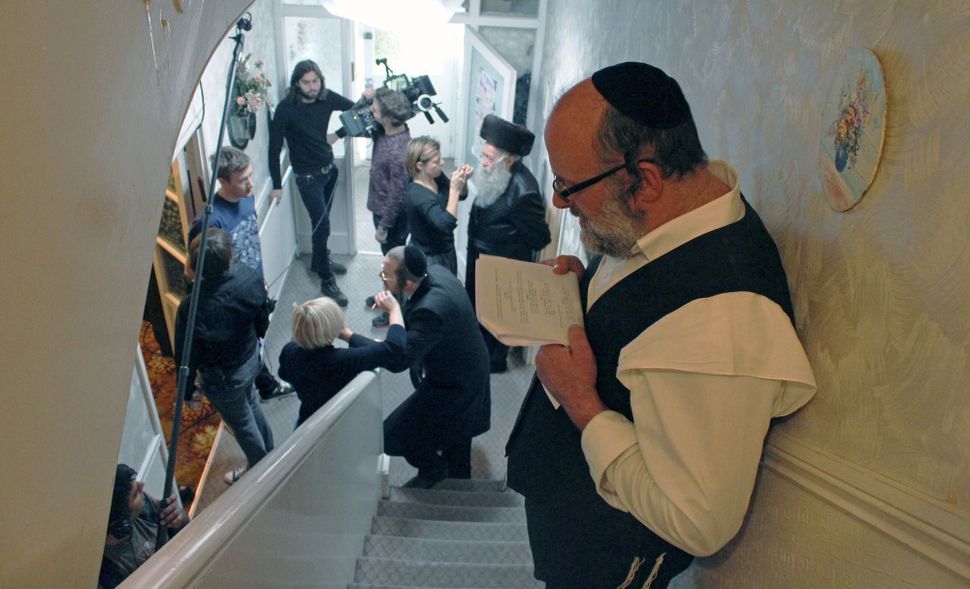 Image by Courtesy of Billy Lumby

There is a New York-based blog called “Hasid or Hipster” that juxtaposes the bushy beards and black hats of Brooklyn’s ultra-Orthodox Jewish population with those of the district’s hipsters and asks readers to guess which is which. Two utterly conflicting cultures divided — by all but a shared neighborhood and distinctive modes of dress.

This same strange contrast struck filmmaker Billy Lumby when he moved into the borders of Stamford Hill, the north London suburb inhabited by about 30,000 Hasidic Jews — the largest concentration in the whole of Europe. In Britain’s equivalent of Brooklyn’s Williamsburg, super-conservative adherents to their faith live side by side with trendy 20-somethings, freely expressing their urban subculture.

For Lumby, it was source material that was too enticing to ignore. “It was just such a vibrant and culturally rich place, so very unusual to me,” he explained. “I would have thought I’d have seen it in a film already.”

What has resulted is a fresh and powerful 15-minute film — the first drama to be shot in Stamford Hill — with the participation of its members and with Yiddish dialogue. It was nominated for an award at the BAFTAs, Britain’s equivalent of the Oscars.

The film, “Samuel-613,” tells the story of Shmilu, a 22-year-old “Jew in crisis” who rebels against Hasidic life, eventually leaving to explore the possibilities of secular London. He swaps arranged marriage and pious devotion for dating (samuel-613 is the name on his online profile), drugs, bacon and Tupac Shakur.

As we begin our interview in an organic cafe in nearby Dalston, Lumby is the one asking the questions: “So, is your name Israeli? But you’re Jewish? Where are you on the religious scale? Do you keep kosher? Do you keep Shabbos?”

An onlooker would surely assume that the writer and director himself is of the faith — and wouldn’t be the first to do so. As part of his research, Lumby went to the Lubavitch synagogue in Stamford Hill, where he said as much: “They said, ‘Are you Jewish?’ and I said, ’ ‘Oh, no. No, my dad’s not Jewish, just my mum.‘ So they said, ‘Oh, you’re Jewish, you’re Jewish!”

Lumby, who has no Hebrew heritage that he is aware of, added urgently, “If you mention that, you must put that I have felt very guilty about it.”

As it turned out, there were enough community members who were keen to aid him regardless of his religious identity. They included some, like the protagonist in the film, who are OTD — “off the derech,” or path — as well as a few still inside the fold.

What was their motivation for helping? “I’ve read that there are people in that world who still dress in the whole garb but decide they’re atheists — but that it’s still a lovely culture and they have family and kids,” Lumby said. “But I’m not saying that was true of the people who helped me. Some people just have a creative side to them.”

He also tried going “undercover” with what he himself describes as cringe-worthy results. On one occasion, he was rattled after the first question: “Who is your rabbi?” “I said, ‘Oh, I’m between rabbis at the moment.’ They sussed me out and, red-faced, I had to just walk out of there.” On another undercover mission, he forgot he was still wearing his yarmulke — until after he had gone into a cafe to order a bacon sandwich. His crash course also involved devouring books and documentaries on the subject and attending evenings of Yiddish poetry and song.

Lumby had originally wanted the whole cast to consist of nonprofessional Hasidic actors. That proved impossible, but he did secure a mainly Jewish cast, with three roles occupied by Stamford Hill residents, alongside non-Jewish actor Theo Barklem-Biggs in the lead role — sporting a convincing fake beard and peyes, or sidelocks.

The father of the lead character is played by Samuel Leibowitz, who is no stranger to the camera, having appeared in two documentaries about his transition back into the Haredi world after serving several consecutive sentences for international drug smuggling (he has described himself as “the Jewish Pablo Escobar”).

Leibowitz told the Forward: “After my documentary with the BBC, I was approached by people in my community. They said, ‘How disgusting.’ Why do I have to make something like this, show the world that Hasidic Jews are involved in drugs?

“But if you watched that program properly, you would see the meaning of this documentary. It is basically showing you, here you have a Jewish guy who has been in prison three times, one after the other, for a total of 13 years. He comes back to his community — how they accept him. It shows how nice and different the Hasidic community is to any other community in the world.

“The same thing with this short film. It came out, to my eyes, very positive, showing a message that we live a life just like everyone else. You find all kinds of different things within the Jewish community, and we don’t put a blind eye to it as if it doesn’t exist.”

Was acting a new experience for him? “No,” he said, “not really. First of all, I’ve done a couple of documentaries before. And I don’t look at it as such a difficult thing, because my whole life is one big act.”

Leibowitz, who also assisted with the script, adds that he has had lots of positive feedback about the film from his fellow Hasids. And that he thinks the “off the derech” issue is one worthy of discussion. “Like any other thing in life, we should talk about it,” he said. “If you go to any person living now in London, using any substance or anything, you’re going to talk about it. This film shows the outside world that the Hasidic community is a very nice community and we’re not animals. And we lead life just as anyone else, in certain [emphasis on “certain”] ways. We’re as human as anyone else.”

Lumby, who admitted that “it’s always going to be difficult for me as a goy trying to make this film about a world that I’m not from,” was at great pains to create an accurate and authentic depiction, one of the reasons he was so keen to include real Yiddish speakers. He says he wants to come across as “an exciting and fearless filmmaker, but [one] who’s been respectful to the community — but I also tried to do the OTD people a service in terms of highlighting their struggle. I just want to make everyone happy, basically,” he concluded with a smile.

For the OTD community, he admitted that the experience is “mixed”: “There are social issues there. The people who leave can struggle sometimes, so it was tricky for me to find that balance. I think some of them felt that it should have been a more positive ending: This guy should have got out and survived. And I wondered if I betrayed them for that fact.”

Although Lumby stays in touch with some of his contacts, in many ways there is still as big a gulf between him and the Haredi world on his doorstep as there ever was.

“I helped a Hasidic woman with her pram up the steps of the train station the other day,” he said, though he conceded: “I don’t go round there for coffee or anything like that.”

But if you see him walking the streets of North London, do sidle over and say hi (or perhaps ask, “Vos makht a yid?”). “I have been hoping for an opportunity to surprise someone with my knowledge,” he said, “but it hasn’t really happened.”