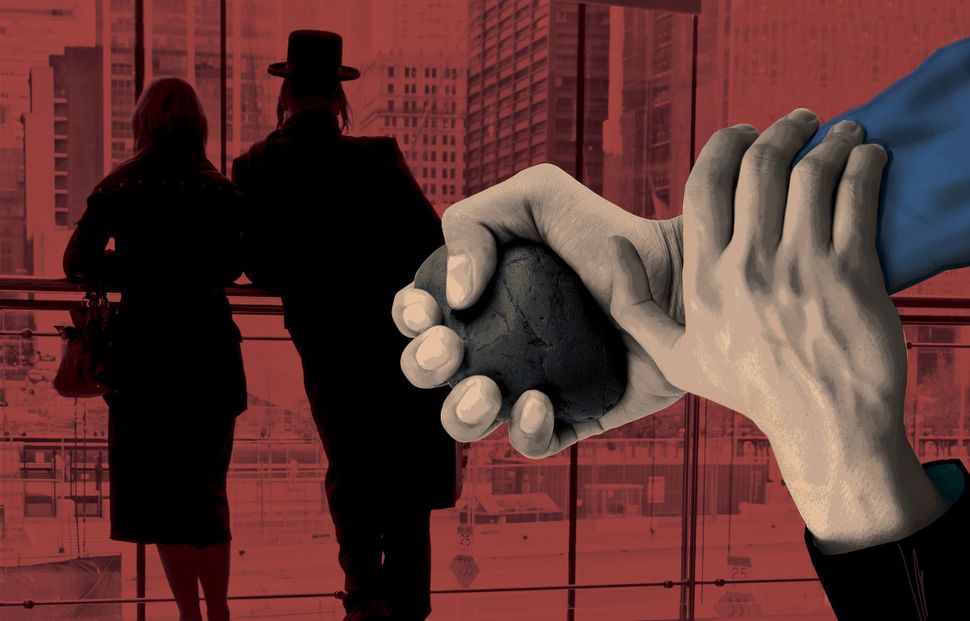 Some time ago, I came across the Twitter feed of a prominent American Jewish writer in which I noticed several disparaging remarks about ultra-Orthodox Jews, with liberal use of words like “parasites,” “psycho Haredim” and other choice denigrations.

Whoa, I thought, that’s a bit harsh, and I tweeted at the writer, saying so. Another writer, an accomplished Israeli journalist, came to the first writer’s defense: “A substantial minority [of ultra-Orthodox] are truly awful.” As if she deserved credit for admitting they weren’t all so.

It’s an odd place to find myself in, given my own frequent criticisms of ultra-Orthodoxy, but it’s hard not to see in the above attitudes something stronger than mere criticism. It strikes me as something uglier: intolerance, disdain, animosity even — not just toward ideas, but also toward people. There’s a strain of real hatred, except it’s often hardest to know it when it’s us, ourselves, directing it at our own.

Growing up in the 1980s in the Hasidic Boro Park area of Brooklyn, there was hatred all around us: in the jeers of Puerto Rican kids on the next block, who would toss basketballs at my head and laugh raucously when my yarmulke fell to the ground (“HAHA — JEW!”); in the sneers of the Italian family two houses down from us, where a mad German Shepherd would strain at its leash, barking and throwing itself violently at the fence whenever a religious Jew passed, a spectacle in which the owners found untiring amusement; in the tales we heard about the alte heym, the world of Eastern Europe as familiar to us as the grimy edges of our own neighborhood: stories of a menacing peasantry always ready for a pogrom, and of clergymen ready to goad them. And, of course, it lay in the memories of only four decades earlier, in the songs about pure doves snatched heavenward, in the legends of Hasidim dancing their way to the gas chambers because the day was Simchat Torah, in the numbers tattooed on the arms of so many men in our shul, every last one over a certain age a survivor of the camps, the forests or the attic hideaways.

During this month of Adar, on Purim, we read of one of the earliest encounters with anti-Semitism in Jewish lore: “There is one nation spread and dispersed among the nations in all the lands of your kingdom,” Haman tells Achashverosh, the king of Persia, before calling for the Jews’ extermination. Haman’s case against the Jews rests on one central belief: They are different. And then, almost as an afterthought: They do not follow the king’s laws.

One particular encounter with bigotry stands out in my memory. It was in Brussels, during the fall of 1995. I, along with several dozen Hasidic men, was on a trip to Israel, and we stopped over to visit the synagogue and to use the ritual bath before morning prayers — a strict requirement of our Skverer Hasidic traditions. Afterward, as we waited for our bus outside the synagogue, a group of schoolchildren passed.

It was morning, and they were carrying books and backpacks, and when they saw us they stopped. They stared. Then they burst into raucous mockery and taunting, pointing with their index fingers, calling for friends to come quick, look, see, these absurd-looking creatures! Soon there were more Belgian children, and more, and more — an endless stream, like it’d never stop! — all with the same wild stares, then the jeers and taunts and pointed fingers; they were across the street, not physically near us, but those fingers they poked from afar, at our chests, in our eyes. Our group stood together, awkwardly, helplessly pathetic, in the face of this sudden and surreal display of hatred by mere schoolchildren.

Our bus arrived some minutes later, and we returned to the airport, but the memory of those children, with their pointed fingers, their laughs, their Belgianness — because that’s all I knew of their identities — remained indelible. I remember wondering what could possibly fuel such instinctive disdain for people they likely knew nothing about. Maybe it was just that we were the Jewiest Jews they had ever seen, and some latent anti-Semitism burst forth from their pure European hearts.

Our instinct, of course, is to be wary, always on the lookout for a bigot in the shadows. A celebrity in an unguarded moment. An international body with an unnaturally anti-Jewish bias. A professor who, secure in her tenure, spouts cockamamie anti-Semitic conspiracy theories on social media. Certainly there is anti-Semitism in the world.

Still and all, American Jews today have, for the most part, been spared the worst of anti-Jewish prejudice. Few Jews today have firsthand experience with anti-Jewish employment discrimination, exclusion from clubs or university quotas. In fact, according to a 2014 Pew study, Jews are the most admired religious group in the country.

Perhaps, then, today, instead of only fearing anti-Semitism we also pay attention to what it teaches us, and one lesson is that hatred is hatred — no more acceptable from within than from without. The challenge is in seeing it, because hatred is rarely recognized as such by its bearers. Those Belgian schoolchildren, I imagine, were not aware of their own malice, but as victims of hatred, we know something the haters don’t: We know the faces of bigotry. We know their words, and their pointing fingers, and we know the hollow rhetoric of those who excuse it.

Or at least we should.

Not long ago, after speaking at a Jewish community center in an area of heightened tensions between the ultra-Orthodox and general populations, a woman approached me and thanked me for “exposing” the ultra-Orthodox world, which was filled with — and I quote — “leeches and crooks.” Others, too, expressed panicked remarks of a similar sort: “They’re growing and expanding and taking over! How can we stop them?!”

What I was hearing were not criticisms but deeply held prejudices. It was as if my own words had given some permission for bigotry, and I couldn’t help but feel troubled.

To be sure, it’s complicated. I, too, fear the ultra-Orthodox. I fear their power, their explosive growth, their political influence. I fear what the spread of Jewish religious fundamentalism means for the broader Jewish community and for the world. I feel angry, too, at the patterns of abuse, the ideological arrogance, the attempts to delegitimize other Jews, the pervasive disdain toward those who live differently. And so I, too, feel the struggle to keep criticism from spilling over into something uglier.

Bigotry, I would suggest, does not form spontaneously. Fear, anger and feelings of helplessness are its active ingredients, but it’s only when given a cauldron from which to boil over — permission and space to amplify the fear and anger with hateful rhetoric — that its subjects become dehumanized, treated like a fast-spreading disease. If the heat isn’t turned down, legitimate anxieties turn to hate, and then we see only that which every bigot has seen since the days of Haman: difference. And it is no more acceptable coming from within than from without.

We say it’s something else. They do not follow the king’s laws. We say it’s the flight delays caused by men who won’t take their seats when assigned one next to a woman — it takes only one man out of thousands to make the news — but we ignore the majority of ultra-Orthodox men who make their arrangements quietly and politely, or just take their assigned seat without much ado about a relatively obscure stringency. We say it’s the abuses toward children, or the covering up of them, and we pretend that ultra-Orthodox parents do not love their own children as we do — a preposterously sinister claim. We say that what bothers us is a culture that breeds economic dysfunction, an ideology that fosters reliance on the welfare state, a worldview that disdains all who live differently — all valid criticisms, in my view — but we must not forget that we can criticize religious worldviews without reducing the adherents to “parasites.”

For over a decade, I have been writing about the problems within the ultra-Orthodox world: the harmful effects of its ideologies; the individuals who suffer for not conforming; the substandard education system; the economic dysfunction, especially among the Hasidic sectors. Certainly there are problems, and they affect not only those within their communities, but also those surrounding them, as well as those born into them but who don’t wish to remain.

But to the lady who thanked me for “exposing” this world of “leeches and crooks,” I have to say: Don’t thank me for reinforcing your prejudices — those are on you alone. Critiquing an ideology or a worldview, or calling out unconscionable behavior by individuals, is our job as citizens of conscience, but the inability to separate people from ideology, or the actions of a fringe from a broader group, should trouble us equally. And certainly, calling any group “parasites” or “leeches and crooks” is hateful and bigoted. We wouldn’t tolerate it if used against any other minority group, and we shouldn’t tolerate it even against a minority of our own.