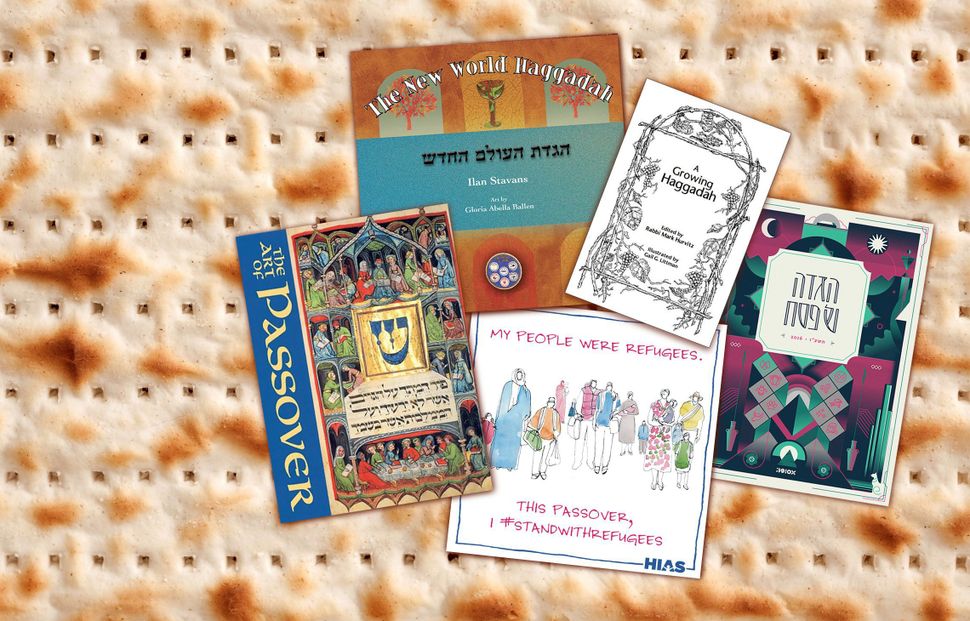 Just a few years ago, my annual review of new Haggadahs marveled at the novelty of a Haggadah app, a DIY Haggadah website, and other new-media ways in which 21st century Jews were remixing this 3rd century hodgepodge of texts.

Now, as with new media and old media in general, the novelties have taken over. Reviewing the sparse crop of new printed Haggadahs this year, the old idea of a printed book that everyone uses at the Seder seems to be on its last legs. Maybe it’s just an off-year, after the recent spate of celebrity outings and other high-profile volumes. But I don’t think so. For that small minority of Jews interested in ritual innovation, I think the Haggadah-as-playlist has already displaced Haggadah-as-LP.

This year’s leading old-media entry, Ilan Stavans’s “New World Haggadah,” shows why. Stavans, an occasional contributor to these pages, has crafted a multicultural, personal, and innovative Haggadah blending the traditional liturgy with poetry and politics. It’s worth a look.

But is it worth a purchase — let alone a set of twelve? I don’t know. Now that it’s increasingly easy to assemble your own Haggadah at haggadot.com, or piece together PDFs, or glean from the harvest of Haggadah supplements that Jewish nonprofits send out each year, I’m not sure why you’d invest in one person’s smart, idiosyncratic interpretation of the Haggadah when you can create a new one yourself every year.

Why even have a paper Haggadah when you can have a more interesting, and in most cases equally beautiful, experience on an iPad? Of course, that won’t work for those who strictly observe the holiday’s laws and refrain from using such devices.

And there’s still space for handsome, artistic volumes like the “Asufa Haggadah,” now available in a bilingual edition after four years of being in Hebrew only. With original designs by a group of Israeli artists, the Asufa Haggadah looks great on PDF, but probably is more impressive on paper. It doesn’t do much but look good – it’s really more of a showcase for the designers than an aid to a lively Seder – but it does look good.

Likewise Stephen Parnes’s “The Art of Passover” — not a Haggadah, but yet another coffee-table type book of photos of Judaica. I don’t know anyone under sixty who buys books like this – not for themselves, anyway – but it, too, is pretty to look at.

And of course, most American Jews have neither the interest nor the aptitude to DJ their own Passover Seders. I suspect Maxwell House is doing just fine, thank you.

But compare this rather thin crop with some of the more interesting supplements, PDFs, and other tools available this year.

“A Growing Haggadah,” assembled by Rabbi Mark Hurvitz and Avigail Hurvitz-Prinz and available at davka.org, for example, is like a snapshot of a certain kind of committed, educated, engaged Judaism that still thrives today, demographic trends be damned.

The “Growing Haggadah” is the opposite of the Haggadah-as-pretty-artefact – in fact, it’s not pretty at all, just a long PDF filled with bad design and really good ideas. Here are the historic evolutions of the Seder, the difference between chametz and kitniyot, the Four Questions translated into Japanese and Russian (who’s the “simple son” now?), word-searches for kids, and even a handy reinterpretation of the four children in diagrammatic form with axes of ignorance and apathy.

God help anyone at a Seder where the “Growing Haggadah” is read in its entirety – it’ll grow the Seder to uninhabitable length. But as a resource, the Growing Haggadah is worth a thousand prettily-printed picture books. While it lacks the complete traditional liturgy, you can download that easily from the web anyway. And what it contains is just a boatload of good ideas and sincere grappling with the questions of the Seder, from spiritual to political to cultural and back again.

And then there are the many (dozens?) of Haggadah supplements out there.

The American Jewish World Service has put out a 36-page quasi-Haggadah that is equal parts social justice sermon and AJWS fundraising. Entitled “Next Year in a More Just World: A Global Justice Haggadah,” the free PDF is less a stand-alone document and more a useful supplement to steer conversations away from smiting and burning anger, and toward more relevant and more timely topics of freedom and justice. Featuring contributions from A-listers including Supreme Court Justice Ruth Bader Ginsberg and JTS Chancellor Arnold Eisen, and photographs of smiling AJWS grantees from across the Global South, “Next Year” definitely feels, first and foremost, like a development tool.

But I think it’s worth sifting through the self-serving parts because there is some really good stuff here. To choose but one example, did you know that 795 million people are dealing with chronic hunger right now? That fact can certainly give a different cast to the Seder’s invitation of “let all who are hungry come and eat.”

Likewise the small supplement from HIAS, the Hebrew Immigrant Aid Society, linking Passover to the refugee crisis. Or Rabbi Arthur Waskow’s “Four Fragments,” which often reads like a Bernie Sanders stump speech, calling out the 1% and spilling a drop of wine not for the traditional ten plagues but for the ten plagues corporate greed has brought about today. Or contributions floating around on haggadot.com, Ritual Well, the Velveteen Rabbi, and personal blogs (one friend sent me some kavvanot – intentions – by Trisha Arlin, for example, including an interpretation of the sandwich as ‘the food that holds a grudge.’)

So, while at first I bemoaned the shorter than usual stack of new Haggadahs this year, eventually I realized I was looking in the wrong place. I was the child who didn’t know how to ask the question. Because today, the question is no longer “what pricey print volumes have been published this year?” and more “where is innovation happening, and what does it look like?” And if you know where to look, there’s more than enough to say Dayenu.