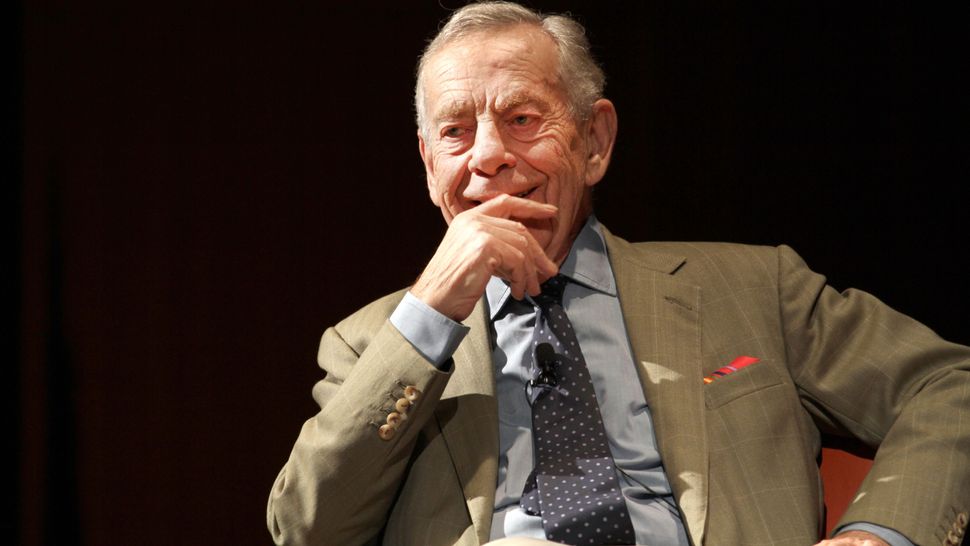 The Canadian Jewish broadcast journalist Morley Safer, who died at age 84 on May 19, was as much preoccupied with ethics and the arts as reporting during his more than a half-century with CBS News, 46 of them with the program “60 Minutes.” He told Abigail Pogrebin, author of “Stars of David: Prominent Jews Talk About Being Jewish,”: “I think that a Jewish background does give you a very, very strong sense of doing the right thing.”

Part of this correctness for Safer was a sense of priorities, doubtless learned in his hometown of Toronto from his Russian Jewish father, Max Safer, an upholsterer, and mother, Anna Cohn. Bullied by anti-Semitic schoolmates, a memory he did not enjoy evoking even decades later, Safer developed a steely, if understated, resolve to point to injustices in subsequent years. In 1994 segments of “Sixty Minutes,” as described in “Second Generation Voices: Reflections by Children of Holocaust Survivors and Perpetrators,” Safer and a film crew visited the German town of Pocking, outside Passau, where Holocaust memorials had been removed by a local council and the names of victims effaced. The camera silently panned the blank walls where names had once been with devastating effect.

Perhaps in part echoing the renown of his more swashbuckling colleague Mike Wallace, Safer developed the reputation of a crusading defender of rights of minorities. He pops up in Marleen S. Barr’s “Oy Pioneer!” (2003) a novel spoofing academia, charging into a university campus office and proclaiming: “Professor Zwiffel, I’m Morley Safer. I would like to ask you some questions about how your English department treats its Jews, feminists, and male homosexuals.” In reality, of the “60 Minutes” crew, Bob Simon was as likely to cover Yiddishkeit-related issues. Yet in 2014, Safer was there to report on the Gurlitt art trove, works alleged to have been stolen by the Nazis. Trying to induce a sense of morality and fairness in some of the key players, with little success, Safer retained his suaveness, as he did as narrator of the 2011 PBS documentary film “Exodus 1947.” Last year Safer profiled the billionaire David Rubenstein who claimed that “Jewish guilt” made him into a philanthropist. Other kinds of guilt were revealed in different interviews, where Safer’s purring, polished baritone voice and weighty presence impressed, like a well-paid therapist peering from batrachian eyes. He emitted leading questions, never flinching even when replies lacked candor, as they did in his 2011 interview with Ruth Madoff, helpmeet of the financial fraudster. When asked about his favorite broadcasts, Safer would not mention interviews at all, but essay-like filmings such as a voyage to the Maldives or a jaunt on the Orient Express.

At home he painted and cooked, inspired, as he told The New York Times in 1994 by his mother’s culinary prowess: “It was sort of modified Jewish cooking, and lots of it.” Although he would attend synagogue on Yom Kippur, questions of kashrut were of less interest. During a 2011 polemic over whether the Century Association should dissolve ties with a British club which did not accept female members, Safer fired off some ironic emails, including one likening the observance of the laws of kashrut to a “quirk, tic, eccentricity, private practice, prejudice and tradition”:

“What will be next? Disassociation with clubs that do not cater to vegans on their menus? Kosher dining rooms? Special facilities for nudists and transsexuals? Abolition of “Centurion” to describe our members, given that the term is, according to the OED, derived from the all-male Roman army?”

Overall, he preferred retaining the sang-froid and restraint of someone determined not to reveal the brash ambition of a Duddy Kravitz, the archetypal Anglo-Canadian Jewish go-getter invented by novelist Mordecai Richler. More subtle and nuanced than Mike Wallace, willing and able to conceal rough edges but with hidden capacities, Safer was the perfect target for a joke on the “Golden Girls” TV situation comedy show in 1985. When the seductress Blanche Devereux mentioned an ill-fated tryst with a Sixty Minutes reporter, Estelle Getty as Sophia Petrillo snapped, “I’ll bet it was Morley Safer!”

His feisty, punchy force was typical of an era of straight-shooting reporting, along with a ferocious will to die with his boots on that possessed other performers, notably Leonard Bernstein, whose public announcement of retirement from conducting preceded his demise in 1990 by only five days. Safer, who died a week after announcing his retirement, belonged to a generation of chain-smoking reporters not averse to a drink or two. These stalwarts proved to be of remarkable physical durability; Wallace lived to be 93. Undoubtedly Safer was anchored by his longtime marriage to the hardworking and accomplished Jane Fearer Safer, a consultant to museums and other cultural organizations, including the Andrei Sakharov Museum in Moscow, the National Museum of Hungary, and the Kunstkammer in St. Petersburg. Daughter of Joseph Fearer, an American Jewish aerospace industry parts tycoon and collector of modern art prints, Ms. Safer served as a continual reminder of what was more enduring than yesterday’s news. Whereas in latter-day news-related reportage, Safer’s voice could descend to gravelly depths with an occasional echo of resignation over what fools these mortals be, when narrating presentations about museum shows of painters such as Klimt, Gauguin, Turner, Hopper, or Rembrandt on “CBS Sunday Morning,” his tones would rise in youthful enthusiasm and ardency. The arts, not the news, seemed to make life worthwhile for Safer.