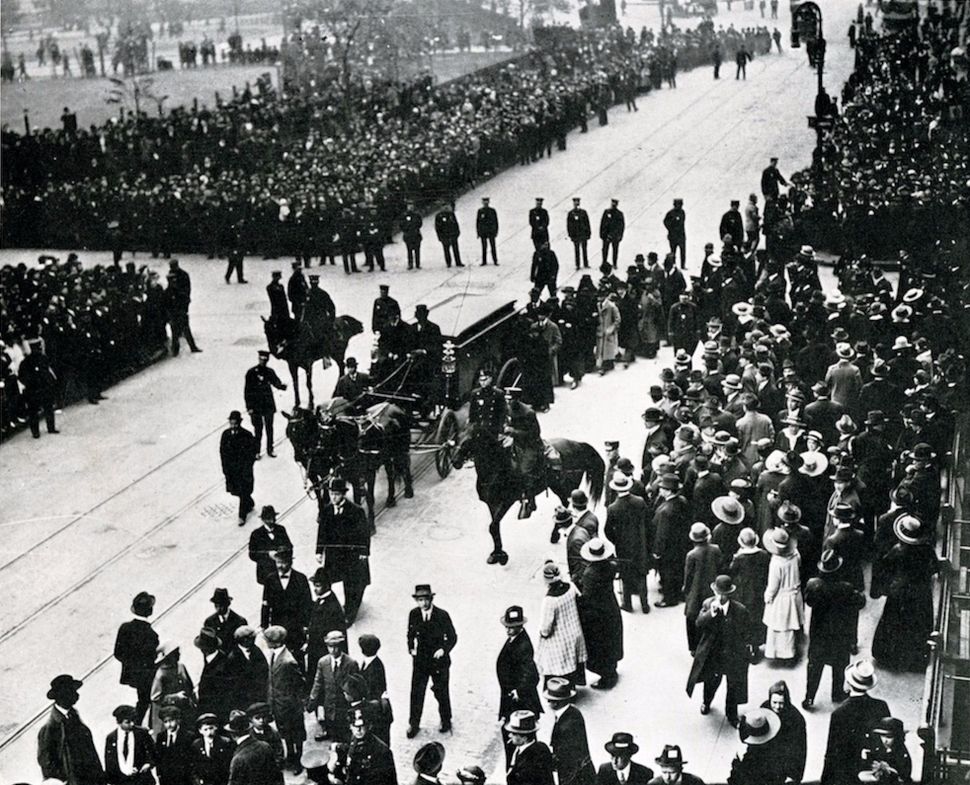 Sholem Aleichem’s funeral was the largest New York City had ever seen. On May 15, 1916, more than 150,000 mourners accompanied the writer’s coffin from his home in the Bronx to the Ohab Tzedek synagogue in Harlem, down Fifth Avenue to the Lower East Side, and finally to the Mt. Nebo cemetery in Cyprus Hills, Queens. The next day, The New York Times reported on the massive funeral, and on Sholem Aleichem’s request not to be buried “among the aristocrats, or the powerful,” but “among the people itself.”

In 2016, the admirers who come out to pay their respects to Sholem Aleichem no longer number in the hundreds of thousands. But on his 100th yahrzeit, he is still celebrated with gusto. In Jerusalem, an international academic conference was held at the Hebrew University, and in Tel Aviv there was a two-day festival at the city’s Cinematheque. In New York, there is an exhibit at the YIVO Institute for Jewish Research, which held its opening May 22 along with a symposium devoted to the author’s work. An educational website, sholemaleichem.org, is being launched by San Francisco-based film company Citizen Film together with Sholem Aleichem biographer Jeremy Dauber. More concerts, festivals and commemorative events have been held and are forthcoming.

What accounts for Sholem Aleichem’s enduring popularity? He was a formative and wildly talented Yiddish writer whose work still stands up to critical scrutiny. And yet, other writers of equal importance don’t receive the same attention. When the 100th yahrzeit of I.L. Peretz passed in 2015, hardly anyone noticed. Although the many readings, performances and discussions of Sholem Aleichem demonstrate his lasting appeal, they fail to answer the most important question: What makes him such a singular object of devotion?

This question was asked during Sholem Aleichem’s lifetime, and not everyone thought he deserved his reputation. When he debuted his play “Pasternak” in 1907, critics —including Forward editor Abraham Cahan — dismissed him. Cahan wrote that Sholem Aleichem had been superseded by younger talents such Sholem Asch. Suffice it to say, Cahan’s literary judgment suffered a few blind spots. Even then, more astute observers knew that Sholem Aleichem was more than the sum of his stories; he had become a symbol of the Jewish people itself.

Sholem Aleichem’s status as the ultimate “writer of the people” was more of an imaginative construction than a reality, however. He came from a humble background, but inherited a large fortune from his father-in-law and set himself up as a cosmopolitan litterateur with a Van Dyke beard and cape. Even after he gambled his money away on the Kiev stock market, he lived mostly in Switzerland and Italy and spoke Russian with his family at home. Although he is best remembered for his character Tevye the Milkman, the rustic Jew who became the basis for “Fiddler on the Roof,” Sholem Aleichem was hardly a Tevye himself.

And yet the facts were always superseded by the myth, starting with his folksy nom de plume, which replaced the more banal Sholem Rabinovich. Even his enormous funeral told only half the story. Mourners packed the streets to honor him after his death, but he spent his last days in exile in the Bronx, poor and frustrated and in ill health, his popularity waning and the world passing him by. It was the symbol of Sholem Aleichem that people mourned, more than the writer or the man.

If that was true in 1916, it is just as true now. At the YIVO symposium, David Fishman of the Jewish Theological Seminary noted the prominence Sholem Aleichem continues to enjoy in his native Ukraine, as well as in neighboring Russia. There are statues of him in Kiev and Moscow, Sholem Aleichem streets in a dozen different cities, and a market for his books, which continue to be published in Russian and Ukrainian translation. In Ukraine, the play “Tevye-Tevel,” based on the Tevye stories, ran for 20 years.

And yet, throughout this time, the meaning of Sholem Aleichem’s legacy has shifted with the political terrain. In the Soviet Union, he was hailed as a champion of the poor, while his Zionism and emigration to America were downplayed. In contemporary Ukraine, he is disingenuously hailed as a Ukrainian patriot, even though his books are absent from school curricula. While he is celebrated and even read, his significance is constantly manipulated and misunderstood.

Neither the Soviet Union nor its nationalist offspring are renowned for the subtlety of their cultural appropriations. But is the situation much different in America? Here Sholem Aleichem has come to stand for the way we’d like to think of all Yiddish culture: charming, funny, bittersweet. As Irving Howe once put it, Sholem Aleichem has become “a jolly gleeman of the shtetl, a fiddler cozy on his roof.” Of all Yiddish writers, Sholem Aleichem has been the most capable of playing whatever role his readers might require of him, in America, as well as everywhere else.

You might blame “Fiddler on the Roof” for this phenomenon, and many critics have. But it’s a fate that Sholem Aleichem brought on himself, long before the musical appeared. There are depths and edges to Sholem Aleichem’s humor for those who are sensitive to them. But above all, he sought to charm his readers, and he succeeded over and over. One hundred years later, we remain charmed.

History, humor, a delicious sense of irony — all of these things are contained in Sholem Aleichem’s writing, plus a good deal more. The popularity of his stories, among both critics and casual readers, is a sign of their richness and strength, not of populist pandering. A hundred years after his death, he deserves to be celebrated. Let’s just make sure it’s Sholem Aleichem we’re celebrating, not what we want him to be.

Ezra Glinter is the critic-at-large of the Forward and editor of “Have I Got a Story for You: More Than a Century of Fiction From the Forward” (W. W. Norton, 2016). Contact him at glinter@forward.com or follow him on Twitter @EzraG