How Philip Roth Predicted the Rise of Donald Trump 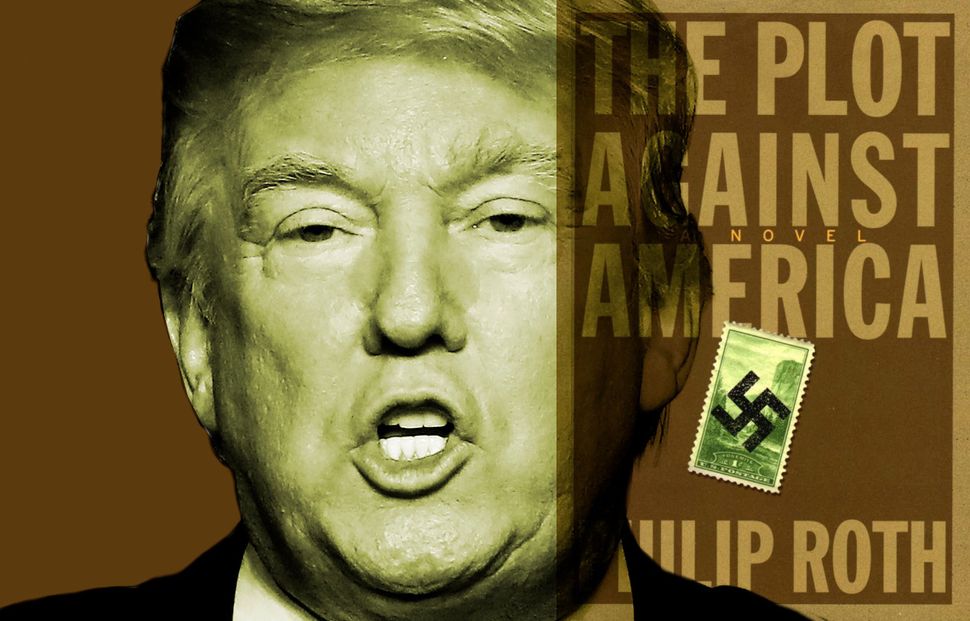 A candidate galvanizes a weakened and divided Republican Party. He’s a celebrity, a charismatic outsider with no political experience, and his racist rhetoric does nothing to halt his momentum. As Philip Roth wrote, “Fear presides over these memories, a perpetual fear.” Am I the only one who — just a week ago — pulled Roth’s 2004 alternative-history novel, “The Plot Against America,” off my bookshelf and found myself reading about Donald Trump?

Alternative histories are often classified as science fiction, and to many of us, Trump’s nomination feels as though it must have taken place on another planet, or perhaps we wish it were, in fact, alternative history, and, like Mr. Tagomi in Philip K. Dick’s “The Man in the High Castle,” we could toss the I Ching and find ourselves in the real world again.

Roth’s novel begins in 1940 when the famous transcontinental aviator Charles Lindbergh flies into a brokered Republican convention and becomes the nominee. His anti-Semitic statements and dealings with Nazi Germany are public knowledge, but on the campaign trail, he says only, “Vote for Lindbergh or vote for war.” While Roosevelt refuses to take the candidate seriously, Lindbergh makes barnstorming appearances, flying to every state in the union in his famous airplane, the Spirit of Saint Louis. The press follows, and showers him with free publicity. Ultimately he wins the presidency by a landslide.

Donald Trump, like Lindbergh, arrives at his position as an established personality rather than as a politician. Of course, while Roth’s 1940-era Lindbergh is a classic, rugged, Midwestern man of few words, Trump’s vulgarity is part of his appeal. On the campaign trail, Lindbergh’s anti-Semitism is implied; Trump does nothing to tamp down his rhetoric about Muslims and immigrants. In some ways, Trump is more accurately a synthesis of Roth’s Charles Lindbergh and Buzz Windrip, the fascist U.S. president from Sinclair Lewis’s 1933 cautionary tale “It Can’t Happen Here.”

Yet obviously it can happen here. It may be simplistic to classify Trump as a fascist, though he certainly fits into recent right-wing, authoritarian trends around the world. As we’ve seen, the improbable will probably happen. Familiar and inevitable candidates are challenged or sidelined. In fact, the very word “inevitable” has a hollow ring. These days, nothing feels inevitable. Thus, we’re living in the season of uncomfortable uncertainly, a season of “What if,” what might be called a science fiction moment, where rules of cause and effect are broken, or rewritten in a language we can’t understand.

Donald Trump may well be our next president. We live in our own version of Roth’s Jewish Newark, and speak to members of our tribe in ways that are suffocatingly familiar.

Alternative history is all about alienation. “The Plot Against America” was inspired by a single line in a book by historian Arthur Schlesinger about the possibility of a Lindbergh candidacy. What if the president implemented cheerfully assimilationist programs designed to fragment the Jewish community? What if he signed a nonaggression pact with Germany? What if a rumor led to widespread anti-Jewish pogroms? What if we went to war with Canada?

The novel opens and closes with fear, and could be read as an assertion that Jews are never really safe in this or in any country, but Roth is less interested in home-grown anti-Semitism than he is in the responses of Newark’s Jews. This is one of the author’s “Roth” novels, narrated by young “Philip.” The central characters are his own family and neighbors, and Roth drops them into these circumstances like lab rats into a maze. How will they respond? They’re second-generation Jews, Americanized to the point where “ten times more customers bought the Racing Form than the Yiddish daily the Forvertz,” but they are deeply insular. Jews know other Jews, and non-Jews are alien creatures, objects of dread and fascination. These non-Jews are the ones who elected Lindbergh, and if they don’t live in the neighborhood, they might as well live on the moon. Some of these Newark Jews choose to collaborate, and some resist. The solidarity’s heroic; the insularity that solidarity demands is suffocating. Leaving the neighborhood is perilous, treacherous and, most of all, bewildering. This bewilderment is most pronounced in the novel’s narrator, the 7-year-old Philip Roth. He can wish he were someone else, living somewhere else, and he even tries to run off to a Catholic orphanage, but he’s always dragged back to the present circumstances. He is a stand-in for the reader, watching the sequence of events without deciphering its logic. Who are these people? What is this country? How am I supposed to understand it? Can’t I opt out entirely?

I won’t give away the ending of “The Plot Against America,” but it’s a cop-out. Roth didn’t seem to have the courage to bring his story to a logical conclusion. If history is derailed, a deus ex machina has a hand on the switch and sets it right again.

There is no hand on the switch today. Donald Trump may well be our next president. We live in our own version of Roth’s Jewish Newark, and speak to members of our tribe in ways that are suffocatingly familiar, tweeting and posting and tumbling and Instagraming. Do we expect some magic intervention to set things right? Trump is not somewhere else, he’s here and real. Maybe it’s time to step out of our neighborhoods and figure out where he comes from and how to stop him. After all, no outcome is inevitable.

Simone Zelitch is the author most recently of the novel “Judenstaat.”

How Philip Roth Predicted the Rise of Donald Trump