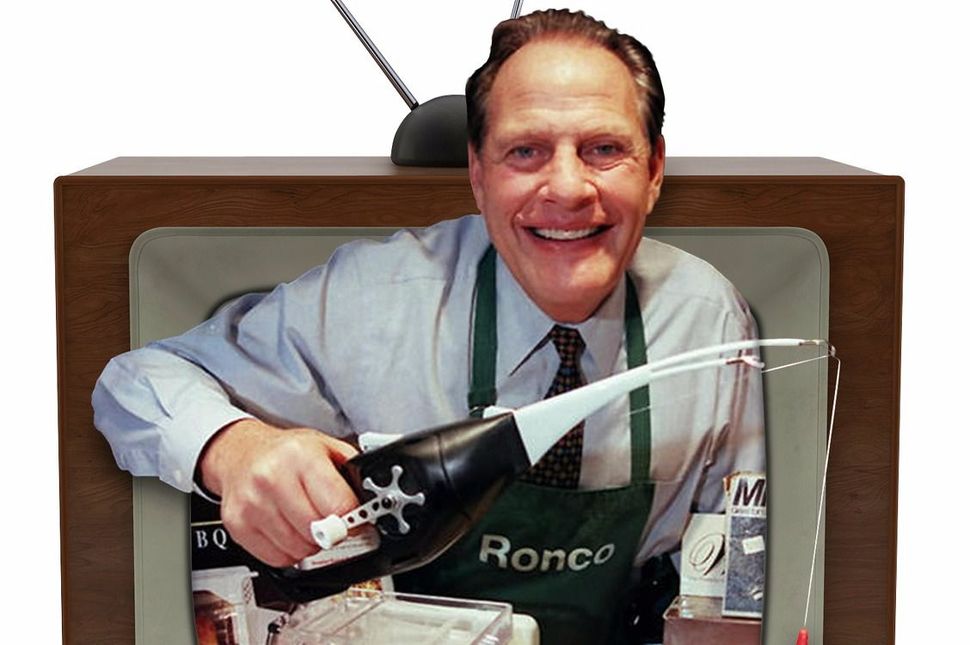 Image by Courtesy of the Elmhurst History Museum

Read this article, and marvel at an exhibit in Elmhurst, Illinois! But wait, there’s more! You’ll learn the incredible exploits of Samuel and Raymond Popeil, and their empire of gadgets and gizmos! Isn’t that amazing? But wait! There’s Samuel’s Popeil estranged son, Ron Popeil, who created Ronco to best his father!

That might have been how a Popeil Brothers or Ronco infomercial would have pitched “But Wait There’s More! The Appeal and Spiel of Ronco and Popeil” on at the Elmhurst History Museum, about 18 miles west of Chicago.

The exhibition showcases more than 125 Popeil and Ronco products that have ascended to the realm of pop culture lore — from Mr. Microphone and the Pocket Fisherman to the Veg-O-Matic and Sit-On Trash Compactor. Infomercials from both companies, inescapable to anyone who watched late-night television over the decades, wallpaper a video installation.

But along with iconic gadgets and indelible advertisements, the show’s about a particularly Jewish kind of salesmanship and showmanship — “a classic tale of hustle and chutzpah,” according to Tim Samuelson, official cultural historian of the City of Chicago and an obsessive Popeil/Ronco collector. “But Wait! There’s More” is based on his 2002 book of the same name and curated by Lance Tawzer, the museum’s curator of exhibits.

“The Popeils’ brand of pitching comes right out of streets of New York and New Jersey with strong origins in Jewish street-sales techniques,” Samuelson told the Forward from his Chicago office. “The origins of the Popeil story in Chicago actually go back to the East Coast, to Asbury Park, New Jersey, and New York, where their relatives were. It was a virtual dynasty of master pitch people. They could get you to line up and put up money for something you had no intention of buying.”

The exhibition traces the origins of both Popeil Brothers and Ronco — the Jewish clans of Popeil and Morris hawked tchotchkes on boardwalks and at county fairs. “It was glass knives, simple slicers, traditions that go back long before the Popeils,” Samuelson said. “It’s not like they invented this. But they did it very well.”

With the emergence of television, Samuel and Raymond Popeil saw the potential to hawk on a grand scale. Bringing their uncanny showmanship and salesmanship to the small screen — to sell products they started manufacturing themselves in Chicago, where they’d relocated to tap new markets — the brothers essentially created the infomercial.

An element of Greek tragedy emerges in “But Wait! There’s More” in the fraught relationship between Samuel and Ron Popeil. “By Ron’s account, his father [Samuel] was so busy trying to build and shape his own career that Ron was neglected. He was sent to boarding school at an early age,” Samuelson said. “Ron was looking to his father as a role model for his own career. There was a lack of connection to make that happen.”

When Ron Popeil tried to launch his own business — inspired by the elder Popeils’ success — “his father and uncle didn’t do much to encourage or help him. But Ron studied with the same kind of obsessive drive characteristic of the Popeils and their products,” Samuelson said.

In his 2011 satire “Bad for the Jews,” author Scott Sherman wrote that Popeil’s appeal was that he “looks just like that nice Mr. Moskowitz who always offers the elderly rides after Rosh Hashanah services.”

But Ronco’s staggering success — 11 million Veg-O-Matics were sold alone — meant that the giant rift between son and father yawned wider. “There was no love for my father at all,” Ron Popeil told Inc. magazine in 2009.

One of the most surprising takeaways from the exhibition is the beauty, and sheer brilliance, of the products themselves. “With an aggressive sales pitch technique, most people think the products are unreliable and wouldn’t last,” Samuelson said. “But the Popeil brothers intended and wanted their products to last a long time.” Likewise, Ron Popeil fixated — behind the scenes — on perfecting his products.

“I’ve talked to him on the phone, and he had to interrupt to check on a prototype he was working on,” Samuelson said. “He was tinkering in his beautiful house in Beverly Hills. He is wonderfully obsessed, like his father and uncle.”

Samuelson’s own obsession began with a chance encounter in a Chicago thrift shop. “I’m the City of Chicago’s cultural historian. One area of research is architecture and design, so I was always looking for well-designed objects with Chicago ties,” Samuelson said. He came across “a beautiful plastic doughnut maker” that turned out to be a Popeil Brothers product. “I was absolutely taken by the relationship of the good design and the whole discipline of pitch-style sales technique,” he said. He wrote his book after reaching out to Ron Popeil and learning about the family’s game-changing inventions — and fraught history.

The plastic doughnut maker — which appears in the exhibit — still occupies pride of place in Samuelson’s kitchen. “I own nearly every Popeil and Ronco product, and almost all of them still work,” he said. “I use these products not for esoteric historical reasons but because they’re ingenious products, beautifully designed. And now, they carry an amazing heritage of salesmanship and cultural history.”

‘But Wait There’s More!’ runs at the Elmhurst History Museum in Elmhurst, Illinois through September 18.