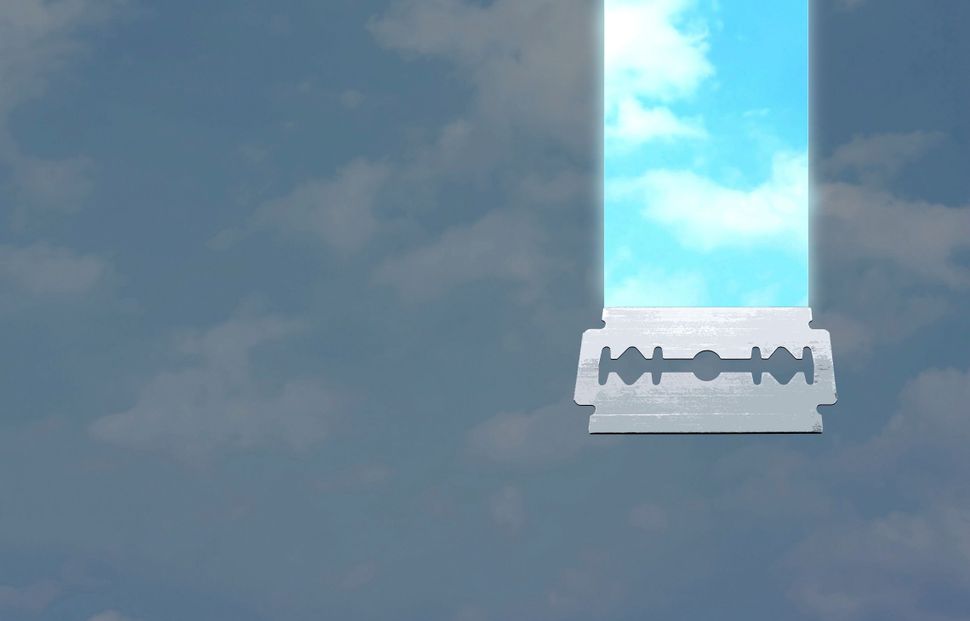 It was either a cheap two-blade Bic or a generic Gillette knock-off razor. Given the almost pathological thriftiness my family had, I assume it was probably the cheaper option, whichever it was. I recall that when I saw the wall of razors at the drug store offering multiple blades and clean shaves, I realized that a yeshiva education had left me woefully underprepared for this moment.

Of course, I told myself, it wasn’t halachically assur, forbidden by Jewish law, to buy a razor; it was only forbidden to shave with one. And even that had caveats. A friend of mine had found a psak, a halachic opinion, stating that a man could shave his neck with a razor. Not his face, but his neck. It seemed unlikely, but my friend said it was a psak and threw it behind the name of some prominent rabbi. It was good enough for me. The fewer questions the better, a Jewish form of “Don’t ask, don’t tell.”

My religious life had been in a slow downswing by then. I was in my mid-20s and single. My friends were all married, and I had outgrown most of the yeshiva system, aside from the occasional class in Talmud study I’d attend in the evening. A character in a short story I had written dreamed of a hot shave, and no matter how many times I ran my old electric shaver over my cheeks, my face was always rough. A good shave was like the Messiah: constantly talked about, never arriving.

The Torah prohibition against shaving stems from a verse in Leviticus, though the verse’s vagueness has allowed some leeway for shaving with scissors and getting rid of hair by using anti-hair cream. Later commentators ascribe various reasons for the prohibition: the desire to not look like a woman; the fear of adopting non-Jewish customs and deviating from tradition. The mystic Arizal forbade shaving altogether for kabbalistic reasons. Rav Moshe Feinstein, leading decider of the 20th century, ruled that electric shavers were acceptable, but he was skeptical of the lift-and-cut functions of many of them. Most Hasidic sects ban shaving entirely. In the best-case scenario, you’re getting a poor shave. My first shaver was my father’s old electric rotary Norelco, the shaver’s rusted blades probably one of the reasons for my horrible teenage acne.

Once I bought my first real razor, shaving my neck gradually turned to shaving my chin, then under my eyes. I don’t recall what was the final straw to a full shave. Maybe it was the thought that it would be a waste to spend so much money and not even get a good shave. Instead of a devil or an angel, I had a Woody Allen caricature on my shoulder.

That first shave, I was Macaulay Culkin in “Home Alone”; I felt the burning on my cheeks from the aftershave as a fitting foreshadowing of the fires of hell that I would eventually experience. But still, it was a clean shave, and one more sin wouldn’t make such a difference.

In the years since I stood in the aisle for the first time. I’ve experimented with different razors, from high-end disposables to cutting-edge electric shavers; I’ve read the blogs and been a part of the forums. During a focus group on shaving, the interviewers were a bit taken aback by how genuinely interested I seemed in shaving. I’ve gotten better; my shaving technique has improved. For a while after each shave, I looked like a bloodied pugilist, and in a sense I was.

My razor of choice these days is the German-made double-edged Merkur safety razor. Like many other Jewish children, I was warned against buying German products, from dishwashers to cars (German cars, like BMWs and Audis, were far out of lower-middle household price range in any case). To assuage any of my post-Holocaust guilt, the razors I actually buy are made by an Israeli company. I like the small heft of the handle, and the sensation of the chrome in my palm.

I’ve wondered where my interest in shaving came from. Perhaps it’s the ultimate rejection of who I was years before: when I lived like a monk in a yeshiva and treated my body simply as a means to get through life. There’s the tactile sense to self-grooming that I never bothered with before — the sense that the here and now means as much as the future and whatever it might bring. It’s a small joy each morning in a nonreligious life.

Or perhaps it’s a daily secular ritual that gives me some meaning, like putting on tefillin every morning did years ago. Now, each morning, I lather a thick foam onto my face and clean away the hair follicles and skin cells — the remnants of who I was. Each day, as a religious Jew, I woke up with the prayer of Modeh Ani, thanking God for giving me back my soul. I recall hearing once that our soul’s return was a new chance: each day, a new you. After each shave, I look at myself in the mirror and run my hands down cheeks that are finally smooth: each day, a new me.

Michael Orbach is a freelance writer based in New York.