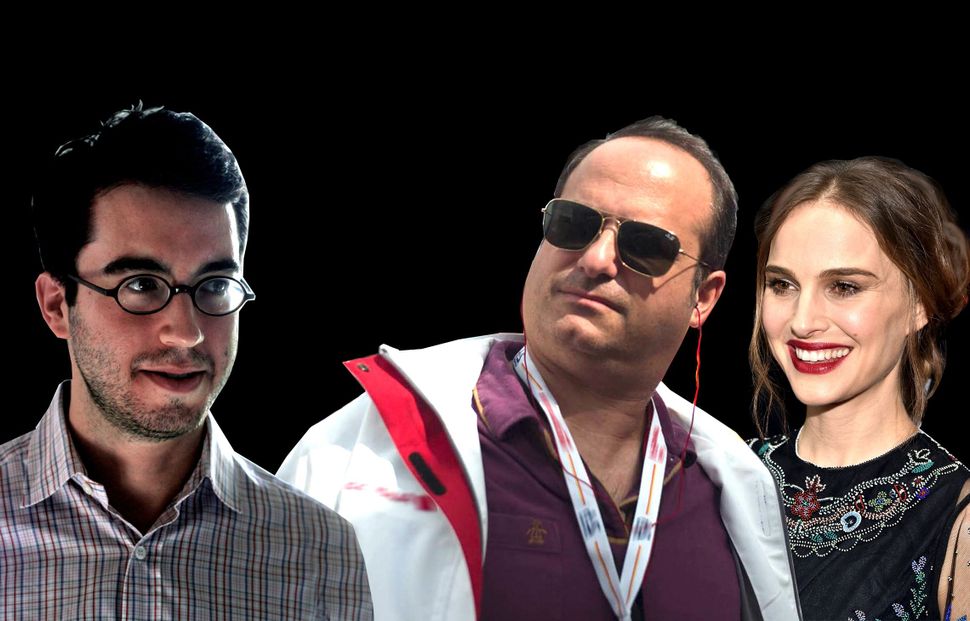 “When The Times suggested this piece, and it became clear we weren’t going to be in the same place for long enough to allow for a traditional profile… I was happy to think of the lost correspondence being somehow replenished with, or redeemed by, a new exchange.” (email from Jonathan Safran Foer to Natalie Portman, New York Times, July 14, 2016)

Editor’s note: For the last month, renowned author Neal Pollack has sent countless emails to Oscar-winning actress Natalie Portman. He’s poured out his heart, shared his creative hopes and dreams, given parenting tips, and provided recipes from the depths of his troubled soul. Pollack has saved every one of those messages. Most of Portman’s replies, on the other hand, must have been lost to a spam filter. This isn’t surprising; Pollack still uses a Compuserve account. Still, even though he wasn’t actually having an actual conversation with her, Pollack pressed ahead. On the eve of Portman’s ambitious directorial debut, he kept corresponding.

Hey, Neal, I really enjoyed your novel Jewball, and I’d like to have my production company option it for a possible film adaptation. Could you put me in touch with your representatives? Great book. Thanks, Natalie.

Dearest Natalie, even since I first gazed upon your youthful visage in “The Transporter,” I’ve longed to hear from you so we could discuss our divergent, yet ever-converging, artistic paths. How often have I sat with you on my lap in my mind as we’ve debated politics, religion, art, music, and the nature of time. Your hair and skin must be so fragrant, untainted by the consumption of meat by-products. Sometimes, I imagine that you are in the next cabin at Jewish summer camp, and we sneak away late at night to share secrets and spin the dreidel. This artistic partnership will bear rare fruit. Together, we shall walk the halls of Asgard: me, an ersatz thunder God, and you, my earthly companion. Yours, Thor (Neal).

In these pre-dawn hours, Natalie, I lie awake wondering why I haven’t yet heard from you, my Black Swan. In the child’s room, the gerbils are squealing, maybe because they’re pooping. People often refer to aloneness and writer’s block as the two great challenges of being a novelist. In fact, the hardest part is cleaning up animal crap. That, and waiting to hear back from an intellectual soulmate like you. As I’ve requested many times in the past two days, please send me photos of you standing at a window wearing only a cardigan and underwear. I need inspiration for my work.

Please stop sending Natalie Portman emails. You’re distracting her from her epistolary union with me. I am the one for whom her vast intellectual chasm yawns. Only I can understand her thoughts about freedom and love and history and romance.

Safran Foer, you twee sellout, Natalie Portman doesn’t care about your work now. It’s me that she wants, me, a middle-aged Texas housedad whose bestselling book is now out of print. I will destroy you and everyone you love. Or at least tweet about them nastily. So back off.

Natalie, It’s the day after the birthday of our country. But what is a country? Who are we? Why are we born? Why do we die? Sometimes I wonder why I wake up at all. Mostly, though, I wonder why you won’t write me back. I long to hear your thoughts on these questions, and to get an assurance that you’re no longer hearing from Safran Foer, my enemy.

I must go now, my dearest friend, for I hear the dawn rumblings of the garbage truck. What are garbage trucks? Why do they come on schedule? What is a schedule? When are cars? Who am I? Why do birds suddenly appear, every time you are near?

Greetings from Pennsylvania. It is a place that is not New York, and therefore it is very strange. I find the rituals of the locals curious, in an anthropological fashion. Now stop bothering Natalie or I will call the police on you.

Bite me, JSF, Natalie Portman is mine!

Neal, Jonathan, thanks for all the emails the past few weeks. They were very thought provoking, and very sweet. I was wondering if either of you could do me a favor. Can I have Dave Eggers’ email address? There’s so much I want to tell him.

Forget Eggers and Safran Foer. Hold me, like you did by the lake on Naboo; so long ago when there was nothing but our love.

Neal Pollack’s latest book is “Not Coming to a Theater Near You.