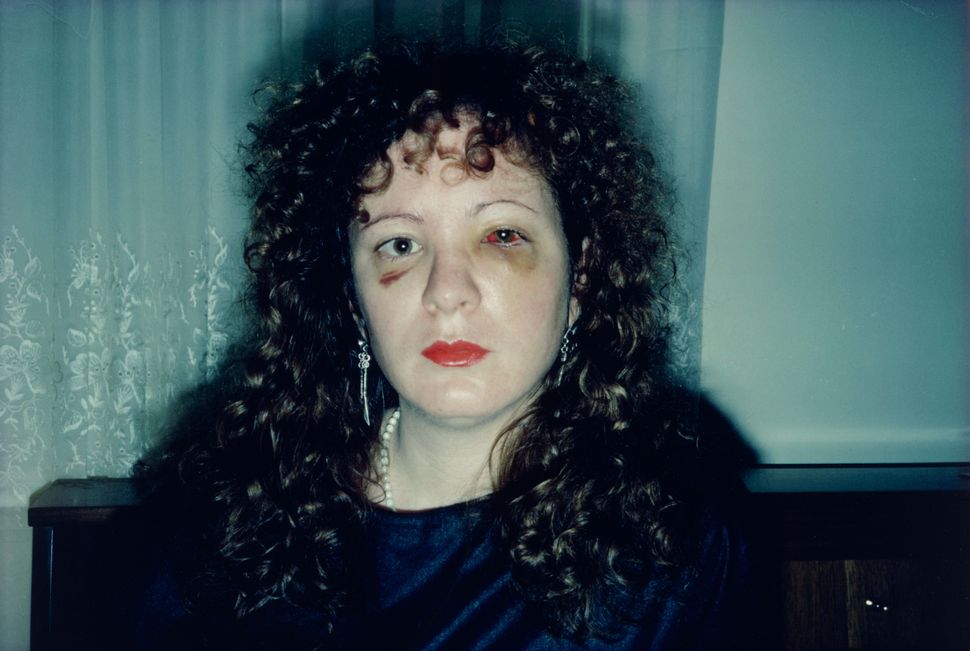 Image by Photographs by Nan Goldin Museum of Modern Art

The first moment that really gets me comes when the strains of “I’ll Be Your Mirror” start, Nico’s voice scratching over the already scratched surfaces of the pictures. It’s a little cheesy, maybe, this song about reflecting another’s innermost self laid over a montage of photographed images of people glancing at themselves, but so what? That’s the point.

Being seen — made visible and valuable and memorable — is at the core of “The Ballad of Sexual Dependency,” a visual diary by Nan Goldin, the Jewish photographer from Lexington, Massachusetts. The diary documents her life among her “tribe,” her chosen family, in New York and Berlin and Mexico and around Massachusetts. Perhaps because the work’s title comes from Bertolt Brecht and Kurt Weill’s “The Threepenny Opera,” it is tempting to describe the slideshow of nearly 700 images set to an evocative soundtrack as operatic. But what is striking, particularly on revisiting “The Ballad,” which will be showing at New York’s Museum of Modern Art through next winter, is how insistently it denies melodrama, how plainly — and so how vividly — it presents life on the margins and makes it, in the process, simply life. There is beauty and there is fear, there is sex and there is death, and there is sickness. There is love with all its consequences, triumphs, tragedies.

Many of the people in these pictures are now long dead — some had died when “The Ballad” first premiered at the 1995 Whitney Biennial — but the work feels neither elegiac nor hagiographic. It is clear-eyed, its romantic touch leavened by its refusal to romanticize. The centerpiece image, “Nan “After Being Battered” (1984), shows the photographer after she was beaten by her partner, Brian, her left eye perilously bloody and swollen (Goldin nearly lost her eyesight as a result of the battery), her face bruised, her lips slicked a defiant lipsticked red. She is positioned against a coolly blue curtain, almost tranquil, shimmering behind her like the sea, and her stare is frightened and resigned, but also demanding, insisting that we look and remember.

“I need to remember things,” Goldin writes in her afterword to the 2012 reissue of the book “I never want to avoid pain. And the only way I’ve gotten through my life is to walk through the most scary, and the most painful, events. You can’t get through a fear unless you face it.” “The Ballad” is the record of survival, but it’s no mere memoir, neither a story of triumph nor of acceptance. “I made this book,” Goldin insists, “ to prove that this was my life and this is what I had done. It was my story. My history. And my people…. No denying.” Her insistence is here inspired by the fact that, as she tells it, few people in this Age of Photoshop and Other Manipulation believe in photographs and the stories they tell, and some have accused her of playing make believe, of setting up scenes and executing an agenda through staged images. But if it might theoretically be possible to question the veracity of an individual image or the stories all the images tell as a bound book of selected photographs, the experience of being immersed in Goldin’s work is essentially and fundamentally true.

So it is perhaps paradoxical to then say that sitting through the 40-some minutes of The Ballad of Sexual Dependency” is a bit like reading a very, very good novel, like entering a world that exists on its own terms and is thus true to itself. Because Goldin grew up in the suburban ’50s and ’60s and because she saw the toll of repression early and tragically in the suicide of her 18-year-old sister, Barbara Goldin, to whom “The Ballad” is dedicated, a part of me wants to link the work to “Portnoy’s Complaint,” for what, after all, ails Alexander Portnoy more than dependency, sexual and familial and moral? But a more apt comparison, I think, is to a work that “The Ballad” portends. In its demolishing of, in Goldin’s words, “the mythology of romance” by “the reality of coupling,” its unstinting recording of the tough and tender accumulations that are ultimately our lives, “The Ballad” puts me in mind of Elena Ferrante’s great Neapolitan novels and their meticulously unsparing documentation of what it means to make a life of the mind for yourself as a woman. Though Goldin is on the surface nothing like Elena Greco, the writer-heroine of Ferrante’s tetralogy, both are ultimately women who do not fear the dark nooks, who exult in what others might see as dirty crannies. They bring light, they bring air, they give life.

Goldin left home at 14, three years after her sister’s suicide. She bounced around, discovering photography at the Satya Community School in Lincoln, Massachusetts, where she also met some of the friends who would become part of her tight-knit circle, fellow creatives and free spirits who allowed her to capture their lives in all their banal and excruciating details. Even as drug addiction and AIDS ravaged this community, Goldin, herself an addict — she recently told Hilton Als, who profiled her in The New Yorker, that many of the slides in “The Ballad” are scratched because she handled them while high — kept on photographing, kept on working on “The Ballad,” setting the images to music, making something new and, ultimately, inordinately influential. She never stopped “diving for pearls,” her term for finding the right image; it’s also the title of an upcoming book of recent photographs.

The cover image of “The Ballad of Sexual Dependency” shows Goldin lying in bed, Brian sitting and smoking, his back turned to her, his face in profile, a cigarette to his mouth between fingers held as though in a peace sign. Over and a little past Goldin’s head hangs a photograph of Brian smoking, a countercultural cowboy. But though Brian’s image diffuses through the picture, it is the deceptively prone Goldin who commands our attention and claims our gaze. “Look, look, look,” she says to us. And look, look, look we must. She will be your mirror and your window, but you will want to be seen and to see.